This is The Land of Confusion: Before Cattle Moved in, the Earth’s Land Had Better Uses 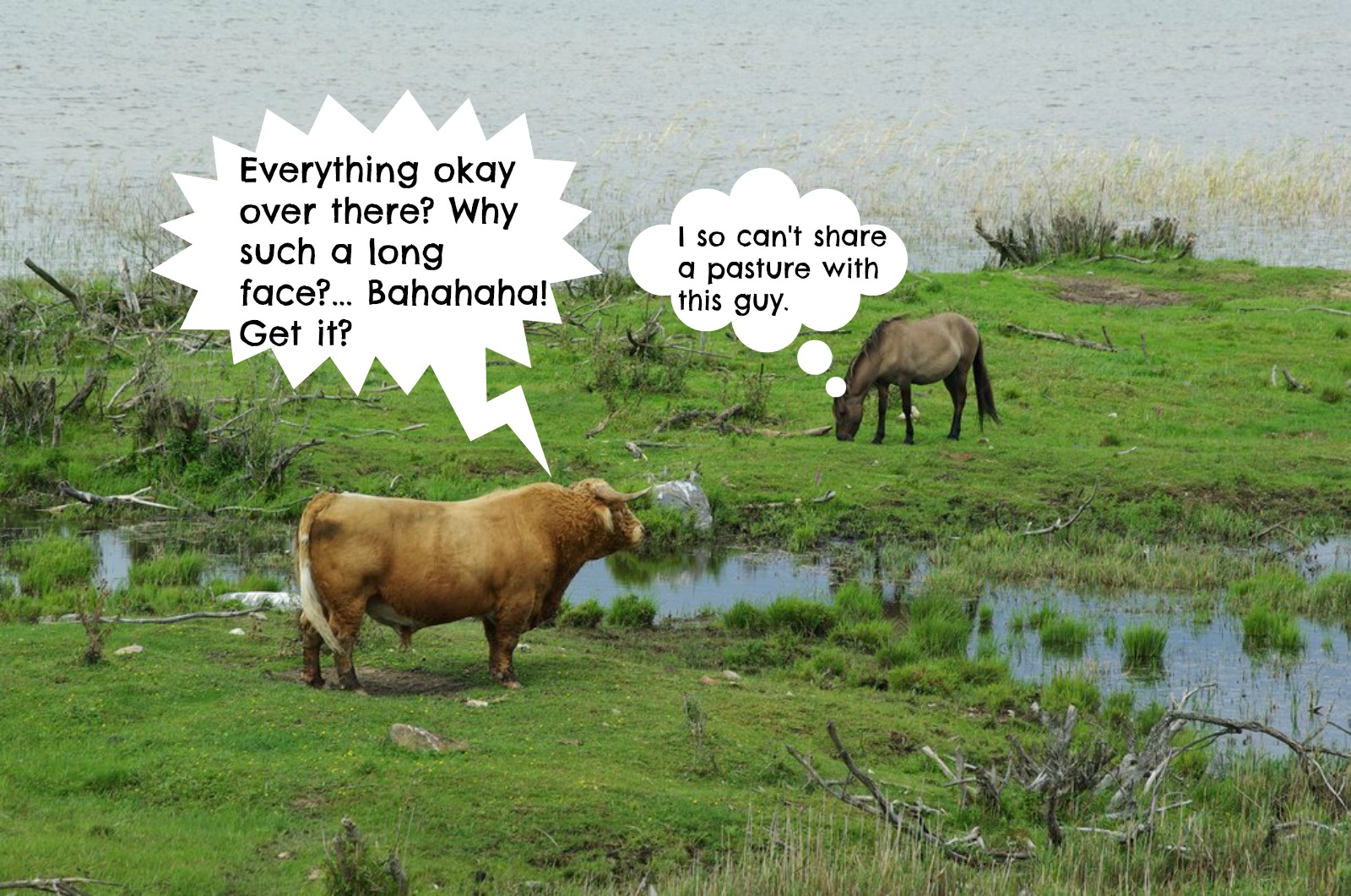 There are approximately 1.5 billion cows in the world today and just over 7 billion people, which means that there’s a cow for every 4.6 people on this planet. Imagine a cow living with every family of five out there, hanging out in your backyard and mooing through your windows. Though that sounds kinda fun, your yard would be pretty trashed after a while and Bessy would get a little stir crazy without room to roam and a herd to hang with.

Which means, if she can’t live with you, she’s gotta live somewhere. 1.5 billion cows need a place to call their own too, and they do so by inhabiting 27 percent of the land mass of the planet. You read that correctly. More than a quarter of the total land mass of our entire Earth is dedicated to cattle. How is this possible? How is this sustainable? The short answer is, it isn’t. The gross overproduction of cattle for beef comes at a steep environmental cost in a multitude of ways, leaving us to examine just what kinds of positive impacts stand to be gained if we were to put all of that land to better use.

Wild horses…we wouldn’t need to drag them away.

The Bureau of Land Management oversees 155 million acres of public lands dedicated to livestock grazing in the United States. While this sounds like a lot, and it is, it only equates to less than three percent of the nations beef supply (78 percent sadly comes from factory farms) and yet the environmental costs are vast, starting with wild horses in western pasture lands that are being removed to make room for the cows.

Wild horses live in family bands, roaming sometimes up to 15 miles in a day to drink and forage for food. Due to their constant movement, they tend not to overgraze any one riparian area. They also consume dry forage caused by droughts, which can help to stave off wild fire risks. Their manure contains undigested seeds that help reseed grasslands and they nip the grass they eat with a clean cut, which leaves existing root systems intact.

Cattle, on the other hand, wrap their tongues around grass and pull, which destroys root systems and leads to grassland deterioration. Cows are ruminants, which means that they stay in one place for longer periods, exhausting the resources in that area. They also digest their food more thoroughly, which means their manure doesn’t contain any replenishing seeds.

Somehow, ranchers have managed to convince the BLM that the horses are the problem however, saying that they’re competing with their cattle for forage. This prompted the removal of 8,255 wild equines in 2012, 4,800 in 2013 and 1,300 on the schedule for this year. With the evidence pointing to cows being the true culprits when it comes to damaging the pasture lands,  we’d all be better off in the long run if they were the ones getting the eviction notice. 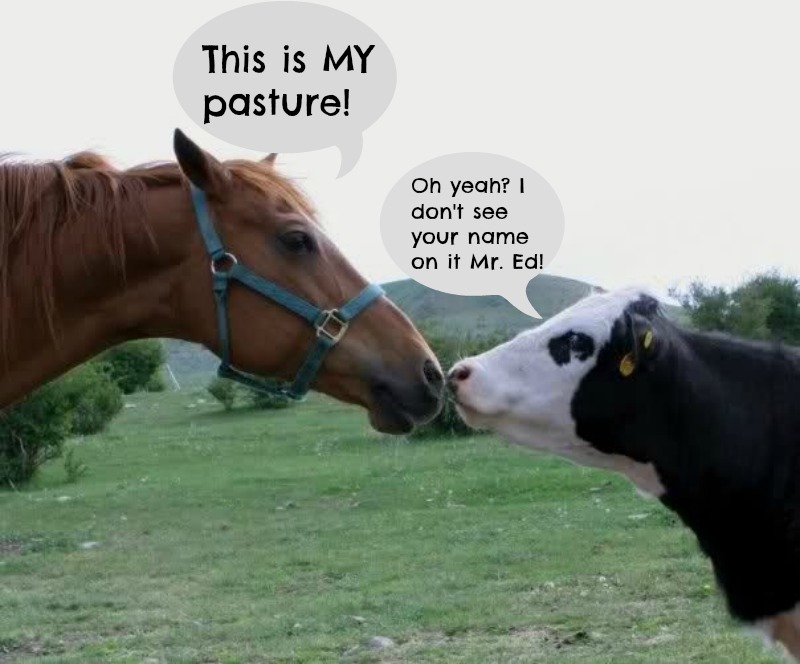 The Amazon Rainforest could keep producing clean air, instead of producing Royales with cheese.

Deforestation of the Amazon happens for several reasons, the topper of which at 70 percent of land loss, is for cattle production. Cutting down large swaths of the rainforest to put cows there eliminates trees that not only produce oxygen, but also scrub carbon dioxide from the atmosphere. It also endangers indigenous animals due to habitat loss and potentially wipes out plant life that we haven’t even discovered yet.

At the rate that this deforestation is happening, one study predicts that the going rate of 1 extinct species of animals per year will increase to 3-4 species per year due to habitat loss. Add to this that the lost canopy of trees leaves the ground more susceptible to mudslides. This sad impact played a role in the death of 11,000 people after Hurricane Mitch hit in 1998. Lost human life and vanishing biodiversity, not to mention the huge contribution to climate change, seems a high price to pay for a hamburger. The land dedicated to the Amazon rainforest will always be better suited for trees, not cows. 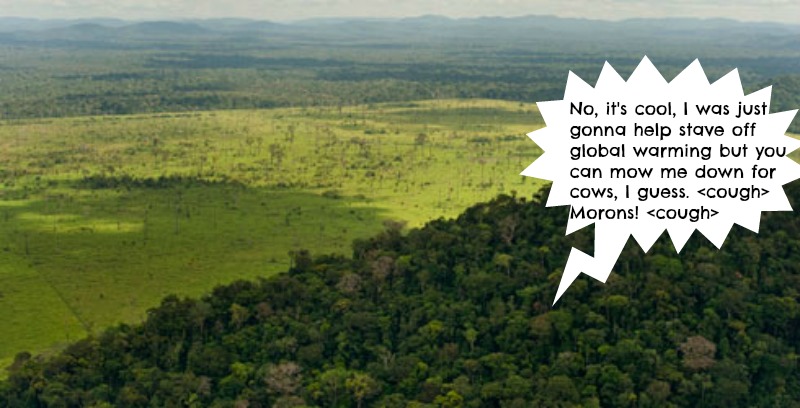 We’ve established that there’s an enormous amount of land going toward creating pasture for cattle, but what about the land used to feed those that live in factory farms and on feedlots? Many of the 1.5 billion cows on earth fall into that category, which means they aren’t eating grass from a pasture but rather grain raised specifically to fatten them up for market. While 27 percent of the earth’s land mass is used for grazing cattle, another 33 percent is used for growing feed grain.

Livestock use 80 percent of all corn planted in the US and 95 percent of oats produced. All told, two-thirds of calories produced per acre of agricultural land in the U.S. go to feeding livestock instead of people! By shifting those crops to direct human consumption, 1 billion additional people could be fed. With current statistics putting the world’s hungry at 805 million, animal feed crops in the U.S. alone could fill every hungry belly in the world. 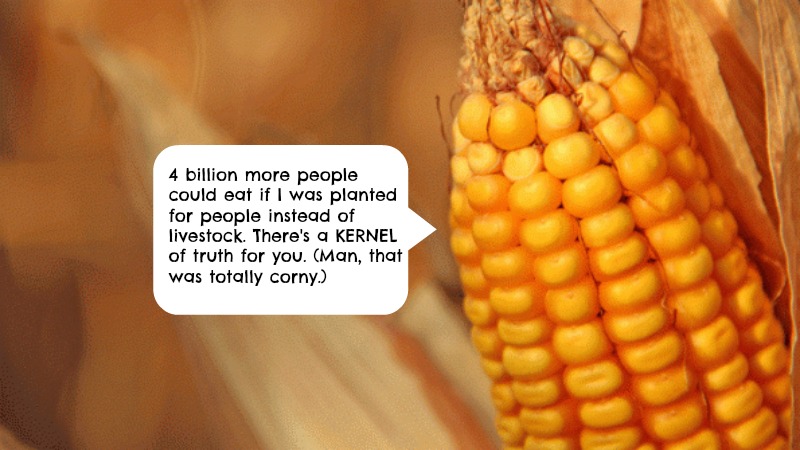 The American West is in the midst of one of the worst droughts in its history, with irrigation for livestock feed crops and cattle production coming in as the leading water user to the region. In fact half of the water consumed in the U.S. goes to producing grain for cattle. Water is diverted from rivers and groundwater aquifers to support the needs of cattle, which are huge.

Cows drink like cast members of The Real Housewives, throwing back 23 gallons of water per day versus 1 gallon consumed by humans. On top of that, producing just one pound of beef takes approximately 1,799 gallons of water, while producing the same amount of wheat takes just 132 gallons. Dairy isn’t off the hook here either, with 600 gallons of water going to produce a pound of cheese while corn takes 108. Plant crops intended for human consumption are the far superior choice for agricultural lands when it comes to water usage. 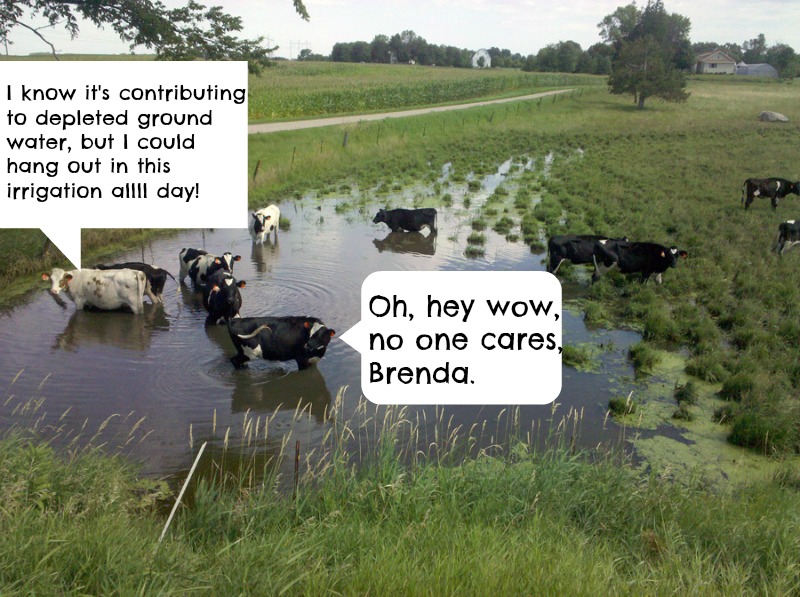