Would You Rather: Environment Edition! 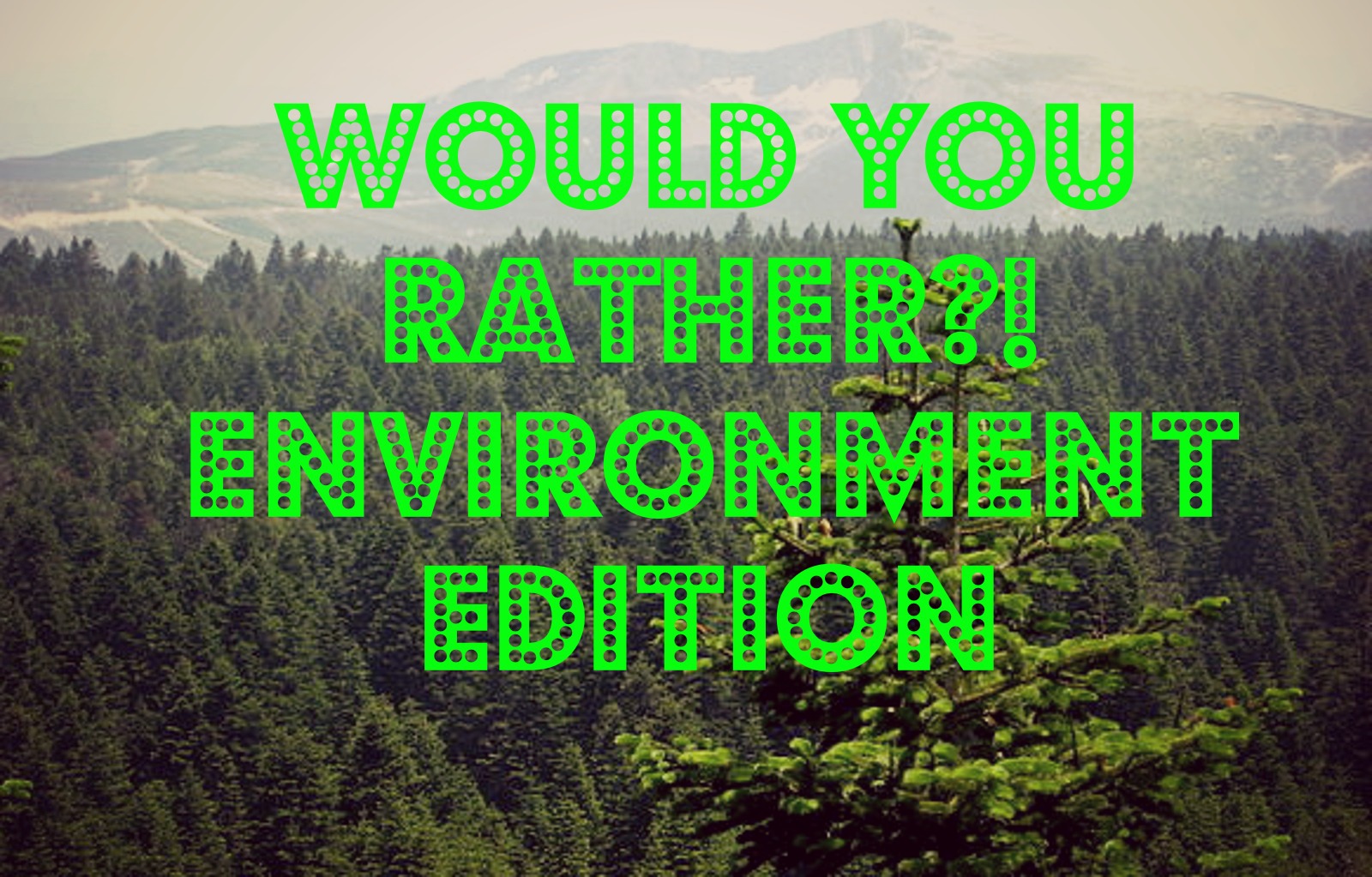 Would you rather be locked in a room with your worst enemy or stick your tongue to a metal pole in the middle of winter? Would you rather tell your most embarrassing secret to everyone you know, or eat ten pounds of black licorice as fast as you can?

Most games of “Would You Rather?” pit you against two equally awful situations, and it’s up to you to decide which is least excruciating, least disgusting, or least humiliating. But in reality, we’d never have to do these things: you’ll probably never have to arm wrestle with a gorilla, lick peanut butter off your uncle’s toe, or paint yourself blue and go running through the most populated area you could find. While we may play this game at parties and hanging out with our friends for fun, it’s actually something we do in seriousness every day. Our moral choices are one big competition of “Would You Rather?” with a lot more on the line than just having a good time.

When it comes to the environment and our home planet, it’s important to ask: are we making the best decisions? Are we making choices that are both easier on us, and on our Earth? Let’s put it to the test of “Would You Rather” and see if our environmental choices are really living up to our potential! Would you rather…

Give Up Showering, or Give Up Beef?

A University study from the Netherlands on water consumption and society’s “water footprint” concluded that “the consumption of animal products contributes to more than one-quarter of the water footprint of humanity.”

Even if you gave up showering for the rest of your life, you might never come close to producing the sort of ecological impact you would if you simply gave up beef and other animal products. Visit National Geographic to see why water conservation is so important (if you don’t know already – we need it to survive!).

Give Up All Paper Products, or Eat Some Veggies?

Writing a note to Grandma? Making your grocery list? Taking down some study notes? Not anymore! Since National Geographic reports that deforestation could make the world’s rainforests disappear within 100 years, we’ve got to find the best solution before the trees are gone. But are your grocery lists really the main source of deforestation across the globe?

While it’s a nice gesture to buy recycled paper products to reduce waste and save trees, it’s an even bigger gesture to eliminate your support of the world’s biggest driver of deforestation. And a lot easier than giving up all paper products!

Bike in the Rain to Work, or Cut Out Dairy?

You could ditch that hummer, refuse to carpool, even stop taking the bus and just bike or walk to work or school. Choosing the two-step or  two-wheel express even if you live a mile away and it’s snowing or raining, or you’re moving so slowly it is highly unlikely you’ll reach your destination by the end of the day.  A dedicated sacrifice to make if you really want to cut back on your biggest source of CO2 emissions, right? Not quite…

The UN has reported, from 2006 to 2011 to today, that cattle are the biggest source of C02 emissions, completely dwarfing all forms of transportation combined (yes, even airplanes).

Even if you chose to never fly to another country again or swore off even stepping foot in a car, when you’re drinking dairy, your carbon footprint is skyrocketing higher than ever before.Your neighbor who owns a hummer and eats a plant-based diet produces fewer CO2 emissions than you do with your weekly trips to Dairy Queen or your all frozen yogurt diet.

And when there are non-dairy substitutes for everything from milk to ice cream to cheese, doesn’t it seem simpler – and better – to stick to carpooling or taking the bus, and just swapping out dairy products?

With dairy cattle also contributing to land and water degradation, there’s no good way to swing it. A glass of cow’s milk isn’t the eco-friendly choice you’re looking for.

So, what would you rather do? Tell us in the comments!