Albie the Rescue Goat Lost his Leg, But Now Has a new set of Wheels! (PHOTOS & VIDEO) 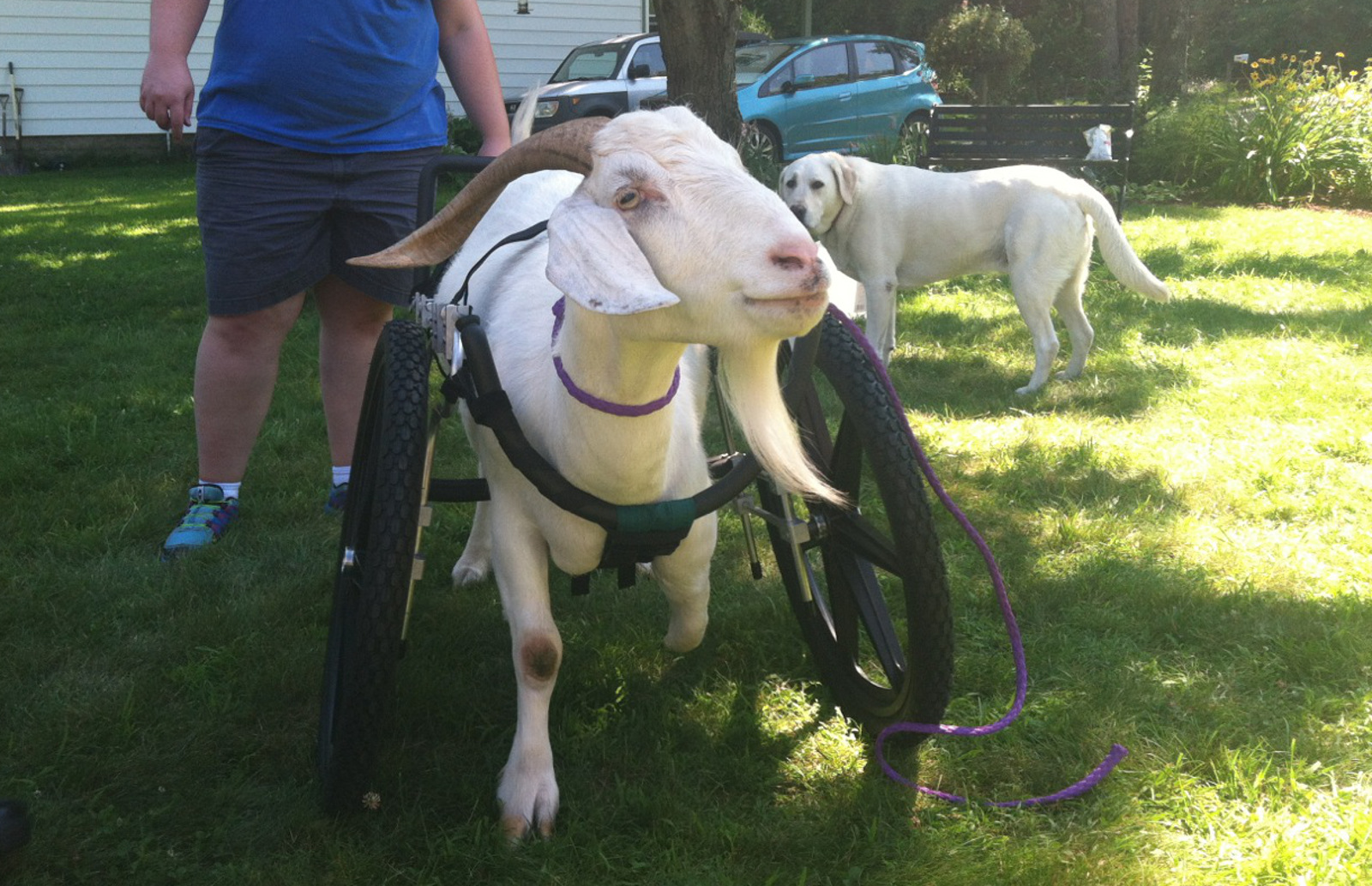 Like most New Yorkers, Albie the goat is one tough cookie. In August of 2007, Albie, the little white goat was discovered wandering around Prospect Park in Brooklyn. You may think that this is a bit of an unusual place to come across a grazing goat, although perhaps these days you might assume it is part of some hipster’s urban farm program…but, surprisingly, finding stray goats in Prospect Park is neither that unusual nor a part of an experiment in agriculture.

According to Woodstock Farm Animal Sanctuary, “there are 100 live-kill markets in NYC,” meaning the local Animal Care and Control department receives many calls with stray escapees from these markets. Clearly, Albie recognized he was in the city of opportunity and decided he did not care to be hog-tied any longer.

Once Woodstock Farm Animal Sanctuary staff were notified that the Brooklyn branch of Animal Care and Control had rescued a goat, they were on the way to bring Albie to his new home. Albie received his name in homage to Albert Schweitzer, the humanitarian and philosopher, and has become a permanent resident on the farm sanctuary.

Upon arrival, it was clear that Albie was not in good condition. Not only was he underweight and malnourished but he was infected with “worst case” of Orf that Woodstock staff had ever seen. Orf is a condition that causes the mouth and nose to be covered with lesions, making it incredibly painful to eat. 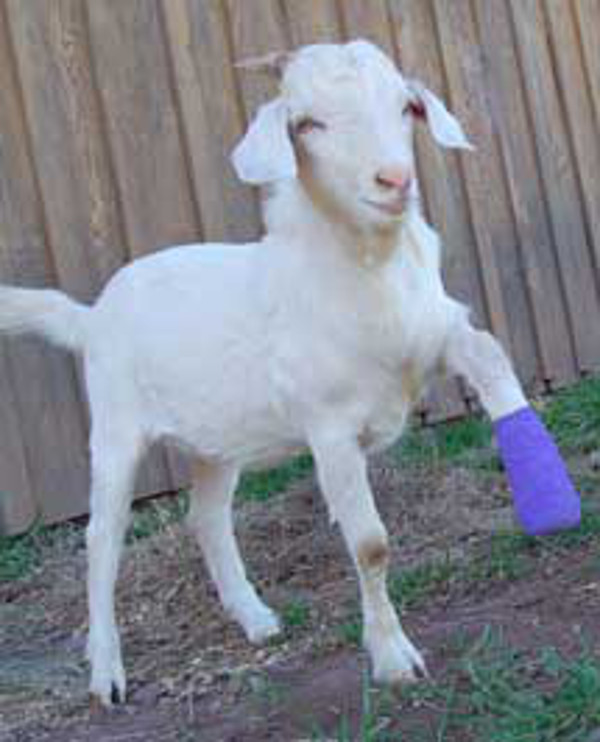 In addition, Albie had an infection in his left leg and hoof. It is believed that this came as the result of being hogtied, Woodstock explains this is, “a routine way of transporting young goats intended for meat.” Being forcefully tied together, the lack of circulation in his legs caused a large portion of his leg hoof to come off, leaving the soft tissue of his foot vulnerable and painful to walk on.

After a period of time it was determined that this infection in his leg was not improving, despite several visits to the vet and supplemental homeopathic treatments. A month after his arrival at Woodstock Farm Animal Sanctuary, it was clear that more drastic attention was necessary so Albie was transported to the Large Animal Hospital at Cornell University and underwent surgery to amputate his hoof and part of his left outer leg.

The medical bills for this sort of procedure are high, however, lucky little Albie had some pretty amazing supporters on his team. To help foot the bill, Book publisher and co-founder of Lantern Books, Martin Rowe ran the New Your City ING Marathon in honor of Albie, asking donors to pledge a dollar or more for every mile he ran. Not only did Rowe complete the marathon in under four hours, but he managed to raise over $11,000 for Albie–how incredible is that!

Having this extra support was even more wonderful considering that this would not be the only surgery little Albie would have to endure. After the initial surgery it was discovered that the bones in Albie’s left leg were too weak to support his weight, so a more extensive amputation would need to be done.

This decision was a difficult one to make, especially for Woodstock Farm Animal Sanctuary’s founder, Jenny Brown, who is an amputee herself. Brown has worn a prosthetic leg ever since she was 10 years old and had to undergo surgery to combat a fast moving bone cancer. However, like Brown, Albie is an incredibly strong and inspiring individual and has not let his amputation slow him down. Speaking candidly about her resilience, Brown says, “It’s a leg not a lobotomy.” 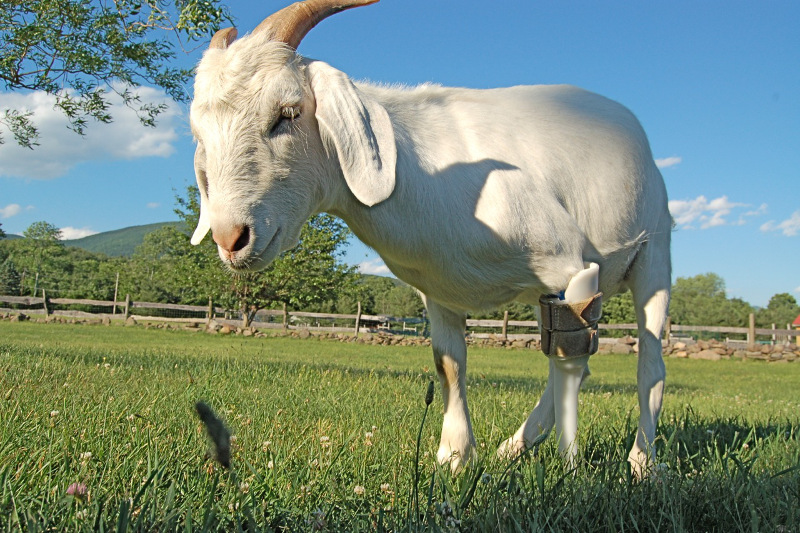 Based on Albie’s affinity for making trouble and running around with the other goats on the sanctuary, it’s clear he felt the same about his artificial leg. Albie has grown significantly over the time he has been at Woodstock Farm Animal Sanctuary and as time went on keeping a prosthetic strapped on this mischievous goat proved near impossible. 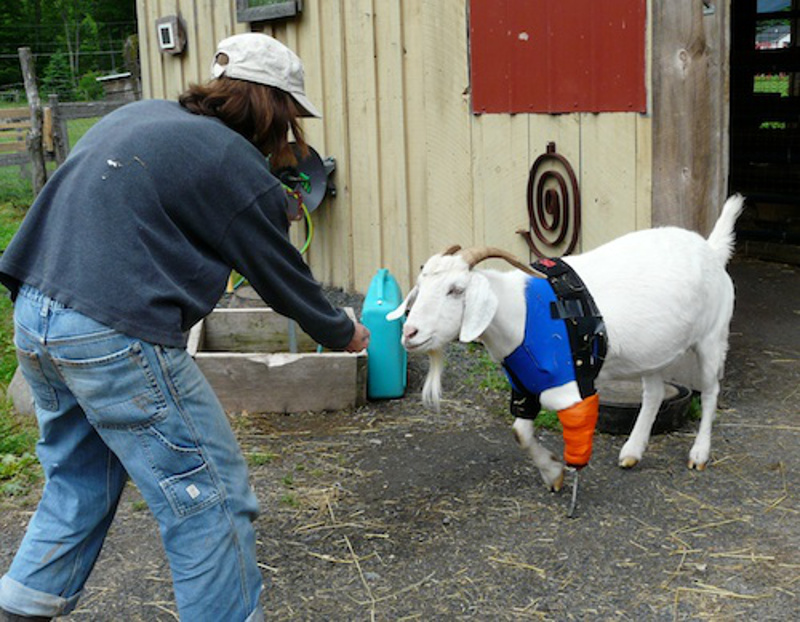 “We tried harnesses, straps, different liners and just about everything you can think of to keep his leg on but alas, it would come off within minutes of walking.”

So, what is a little goat with gumption to do…get a set of wheels, of course! 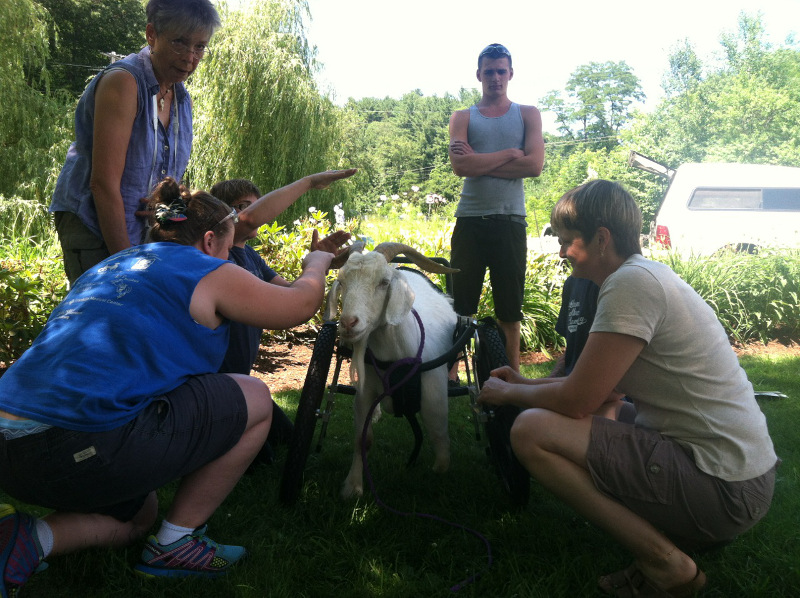 Clearly, there needed to be a different solution to help Albie move about, so he was taken to Eddie’s Wheels, an amazing company that outfits disabled animals of any species with wheels and wheel carts. Working closely with Albie in their shop in Shelburne, MA, the amazing people at Eddie’s Wheels were able to fit Albie with a wheelchair that will allow him to zoom through the farm with the lightest of ease.

Just check out this video of Albie cruising:

Of course it will take some time for Albie to adjust to his new digs, but how amazing it is to see all the hard work and dedication from the compassionate people at Woodstock Farm Animal Sanctuary pay off in the form of a happy goat who can move without being in pain. 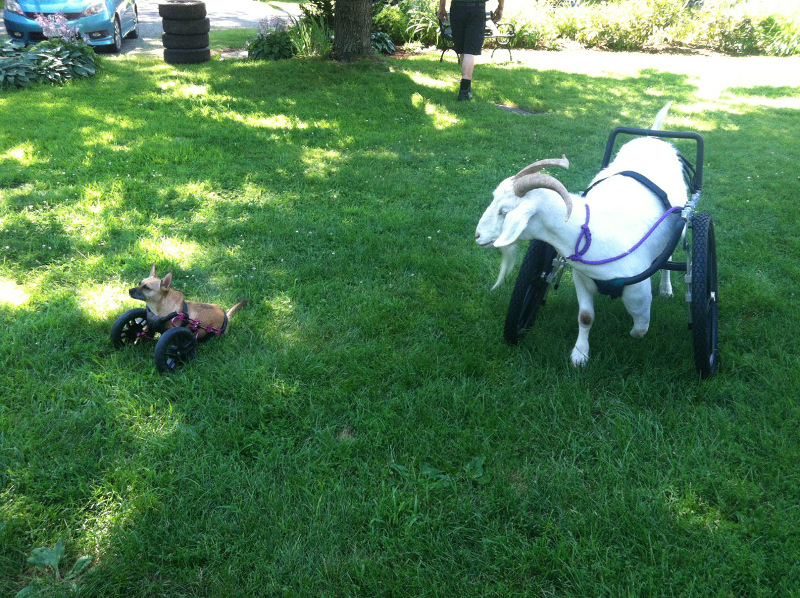 This new wheelchair will indefinitely improve Albie’s quality of life. He has been a fighter since the beginning and clearly his unrelenting will to not only live, but thrive is coming to fruition.