Rescued Baby Goat Frostie Learns to Move Around With His New Wheels! (VIDEO)

Rescued Baby Goat Frostie Learns to Move Around With His New Wheels! (VIDEO)

It would be hard to say no to a face like Frostie’s – Edgar’s Mission Farm Sanctuary in Victoria, Australia, certainly couldn’t!

The sanctuary recently took in the adorable baby goat after he was found suffering from severe dehydration and a terrible lice infestation.

Yet, what turned out to be more troubling was that Frostie was also living with joint naval ill.

According to Edgar’s Mission, “Joint navel ill is a disease that is seen in very young calves and kid goats and results from an infection entering the body via the umbilical cord soon after birth.  The causes are often insufficient or poor quality colostrum (a mother’s immune building first milk) or a dirty and hygienic environment.”

Frostie’s joint naval ill had spread through his bloodstream and “settled in the joints of his hind legs,” leaving him in pain and rendering his back legs immovable, as Edgar’s reports.

Thankfully, Frostie is now in the caring and loving hands of Edgar’s Mission team members, who are dedicated to keeping Frostie safe and happy. What’s more, they are determined to give Frostie as normal of a life as possible and have recently let Frostie try out Leon Trotskey’s wheels.

Check out Frostie scooting around in his new wheels in the video above and then be ready to “aww” like no other at the adorable photos of him below! 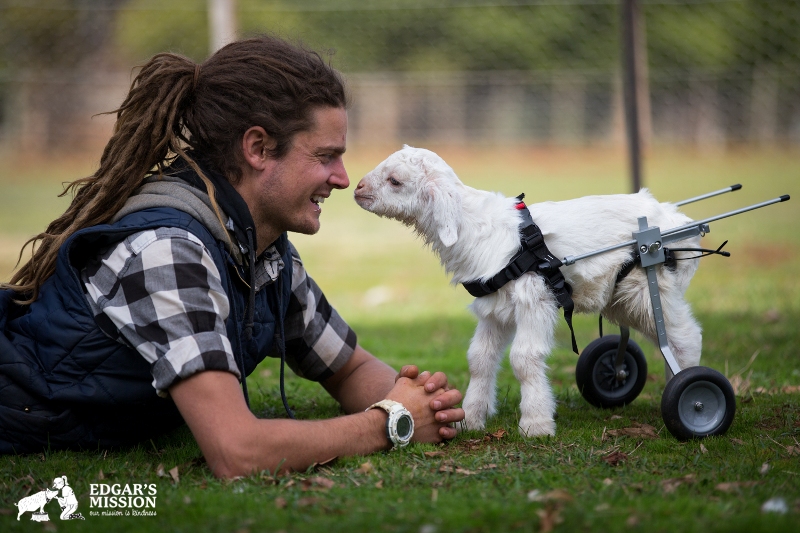