9 Fears and Superstitions About Bats That Are Completely Untrue 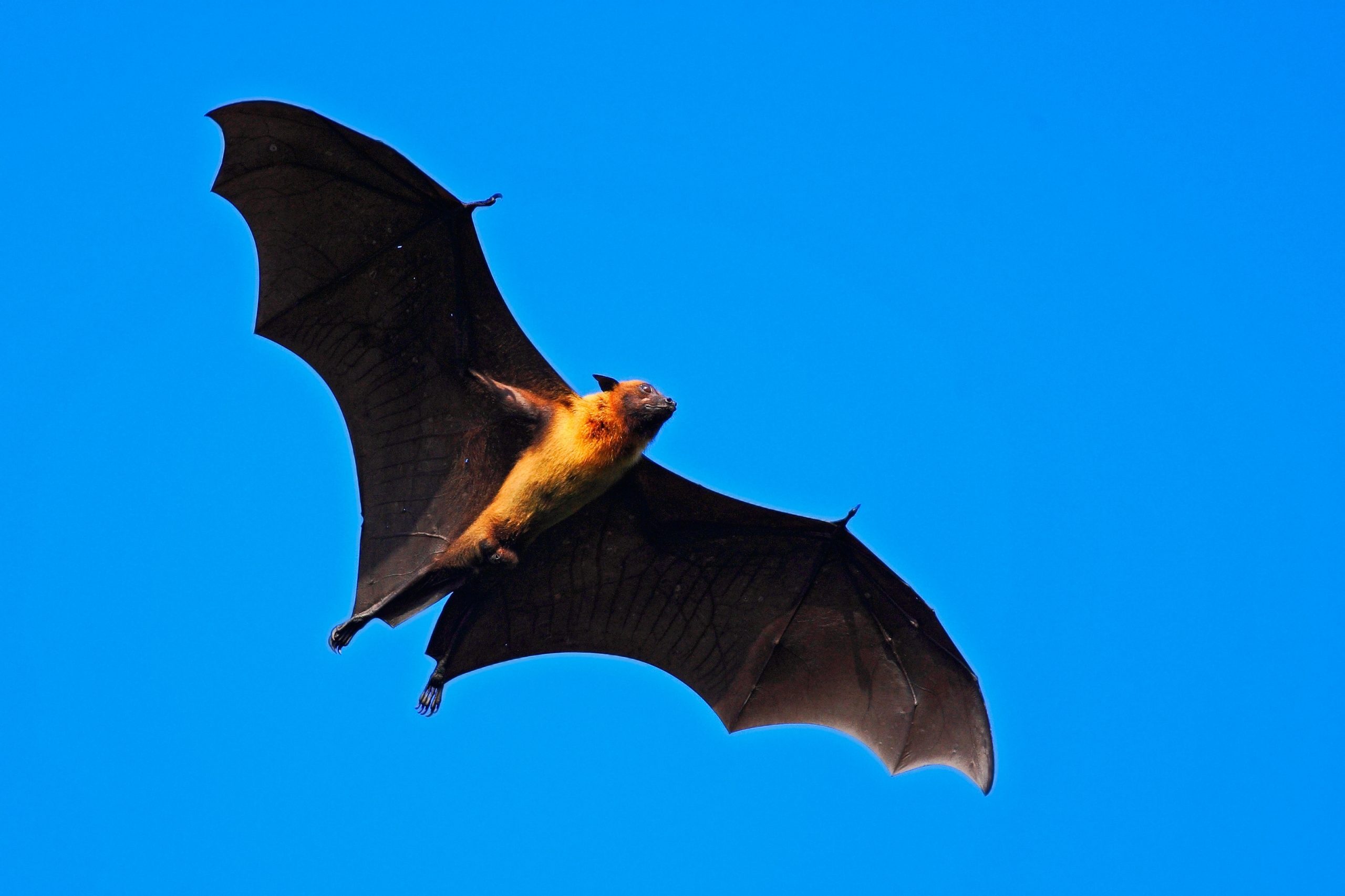 Bats are magisterial creatures with Goliath-like wings who have various epithets attached to them – blood-sucking vampires, carriers of bad omen, and most recently spreaders of a lethal disease, Covid-19.  There is no scarcity of folktales and myths that villainize bats. Behind these veils of myths and superstitions that adorn the bat exists a majestic mammal that plays an integral role in our ecosystem. Yet, due to their unfair reputation, bats are slowly disappearing, teetering the edge of extinction.

The first and most pivotal step to conserve these majestic animals is to familiarize ourselves with them, permanently shedding the veil of myth and superstition that shrouds them.

Myth 1. Bats were Once Unhappy Birds

If you travel to parts of southwestern India and ask people what they think of when you ask about bats, locals may tell you of a tale about how bats were once unhappy birds who wished to be human. They slowly began transforming into a human – they got hair, teeth, and a few other mammalian features. Yet the process abruptly stopped, and the creatures remained mostly bird-like. Ashamed of their new bizarre features, the birds began only moving around at night, hiding their faces during the daylight.

The famous Indian folklore mentioned above mistakes bats as unhappy birds. In reality, bats have no relation to birds and are in fact flying mammals! Bats belong to the scientific order Chiroptera, a term with  Greek roots meaning cheiro (hand) and ptera (wing), indicating the similarity of their batwing to a hand. Like most mammals, they too are warm-blooded and have fur covering their bodies.

Some species of bats are suspected to exist even before humans. Evidence of their existence has been found from even 50 million years ago during a time known as the Eocene.

Myth 2: MicroBats are Small, and Megabats are big

Bats are broadly divided into two categories, Megachiropetra, which are Old World fruit bats, and Michrochiropetra, or echolocating bats. These names can be misleading as often, megabats can be smaller while microbats can be bigger. The classification was done due to the microbats’ abilities to use echolocation to navigate and hunt, while all other bats which do not use echolocation are megabats.

The classification, however, helps distinguish bats as they are one of the most speciose mammals after rodents. Over 100 species of bats exist in India alone! In our bat-rich subcontinent, you can find eight families of bats-  Fruit bats, Mouse-tailed bats, Tomb bats, Free-tailed bats, Horseshoe bats, Leaf-nosed bats,  False Vampire Bats, and Vesper Bats.  The most common bats in India are the Indian flying fox, the fulvous fruit bat,  and the short-nosed fruit bat.

At the risk of disappointing Dracula fans, bats do not feast on human blood. What a bat eats varies according to its specific species and family. Bats belonging to the category of Megachiroptera are mostly fruit-eating bats. For example, the Indian Fox Bat, the largest flying mammal in India, sustains itself primarily on fruits and sometimes flowers and pollen. Bats in the Microchiroptera category mostly feed on insects. These bats even feast on mosquitos, eliminating the real blood-suckers of the world!

Myth 4: If a Bat Bites Me, I will Turn into a Vampire!

Bats rarely even bite humans, let alone turn us into vampires! Despite their threatening appearance, bats are docile creatures more afraid of us than we are of them. The closest they might get to a human is to cross them to get to their food or simply to exit a location.

While a bat bite may not turn you into a vampire, it could transfer certain viruses to you. Thus it is always advised to maintain distance with a bat and never handle a bat unless you are a professional.

We’ve all heard the typical saying “blind as a bat.” Yet, contrary to popular belief, bats aren’t blind at all! Bats have small eyes that allow them to see during the night, the primary time they utilize to move around. Since bats do not operate in the day, they do not need a sharp and colorful vision to survive.

As mentioned above, Microbats use echolocation for hunting and navigating. This means they use sound waves and echoes to locate other objects and animals and understand their surroundings. Megabats, on the other hand, use both sight and smell.

Myth 6:  All Bats Have Rabies

In 2017, scientists from the National Centre for Biological Sciences and the National Institute of Mental Health and Neurosciences in Bengaluru found the first evidence of the rabies virus or a related lyssavirus in Indian bats. However, the same researchers also asserted that their findings were preliminary, and the primary spreader of rabies continues to be dogs, accounting for 99% of rabies cases in India.  Further, according to the Centers for Disease Control and Prevention, only 6% of bats have been tested for rabies, most of whom were already sick, weak, or attacked by a cat!

With the onset of the Covid-19 pandemic, bats came under scrutiny for being the carriers of this deadly virus spread to humans. A report by World Health Organization and China reported that the spread of covid from bats through another animal was very likely and direct distance from bats to humans was also possible.

However, it is essential to remember that none of the Coronaviruses (SARAS-CoV, MERS-CoV, or SARS-CoV2 ) have been detected in all the bat species worldwide. Thus no evidence can allow us to blame bats for a deadly pandemic neatly.

Many people believe that bats are mere pests that add no value to our world. The reality, however, is that bats are very integral to our ecosystem! Fruit bats specifically play an indispensable role in seed dispersal and forest regeneration. They disperse seeds that are proven to have higher germination and growth.  It was found that three common fruit bats alone help in the pollination and seed dispersal of around 114 species of plants with significant economic and medicinal value!

Apart from regenerating forests and pollinating plants, bats also help control the rodent and insect population! A small bat can eat almost 5,000 mosquitos in one night! Further, bats in rural India consume insects that can be detrimental to crops.

Myth 9: Bats are “Vermin” that can be killed freely

The misery of bats in India is only further exacerbated by the  Indian Wildlife Protection Act that classifies fruit bats under Schedule V, which situates them as “vermin” along with other rodents that can be freely killed! Insect bats are not even mentioned in the schedules of the Wildlife  Protection Act.

However, unlike most species under the “vermin” category, like rats that multiply quickly,  bats have low breeding rates. Some insectivorous bats only give birth once to twice a year, regulating their population naturally. Thus, categorizing them as vermin and allowing the free killing of bats can be fatal for the bat population. This categorization also does not consider the 53 endangered bat species that exist around the globe and the myriad of benefits bata provide to our ecosystem.

Common Threats To Bats in India

With an unfair reputation superseding them, bats are fighting an uphill battle for survival. The large-scale resentment towards bats during the Covid pandemic has led to demands to cull the animal, completely eradicating them from certain localities. In certain areas, people also resort to damaging the roosts of bats to move large bat colonies out of their neighborhoods.

Bats are also hunted for medicinal purposes or as alternative sources of meat. This led to some local populations becoming endangered or extinct. Other local populations of bats have also disappeared with no possible explanation. For example, the Kolar Leaf-Nosed Bat could be found in only two caves in the village of Hanumanahalli in the Kolar district of Karnataka. The bats in both caves have become extinct, and the reason for their extinction is yet to be determined.

Sometimes mundane human activities like putting pesticides to kill insects also harm bats. Insectivorous bats depend on insects for sustenance, but bats are losing out on their daily food due to pesticides. Other economic activities like granite quarrying also endanger bats by destroying their natural habitats. This forces bats to venture into human-dominated landscapes. While bats quickly adapt to dense human surroundings, they also face threats like injuries due to colliding with buildings and posts. Wildlife SOS has rescued several injured bats from homes and university campuses with injured wings or is simply starved.

What can we do to conserve the Bats of India? 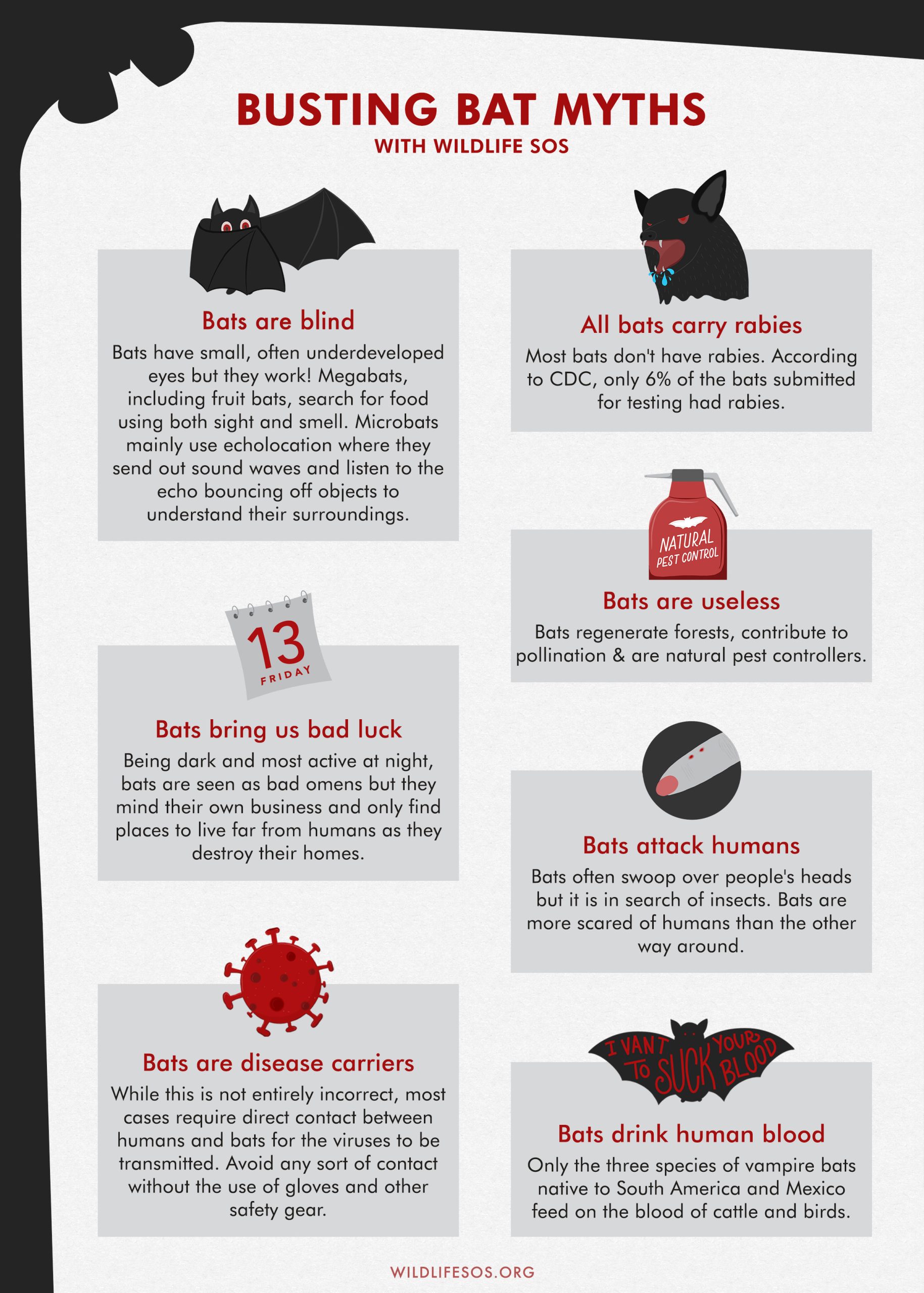 If you’ve made it this far in the article, you’ve already taken the first step to conserve bats in India! Awareness can go a long way and help us understand how to coexist with animals, specifically animals like bats, who are diametrically opposite to humans – experiencing the world hanging upside down. Further steps to conserve bat species would include utilizing your newfound knowledge on bats and educating others to learn about bats l and treat them with empathy and compassion.

There is also the urgent imperative to remove bats from the “vermin” category and provide them some degree of protection under the Wildlife Protection Act.

The survival of bats depends on our willingness to co-exist with these species. We can all make a promise to protect and conserve our neighborhood flying mammals!