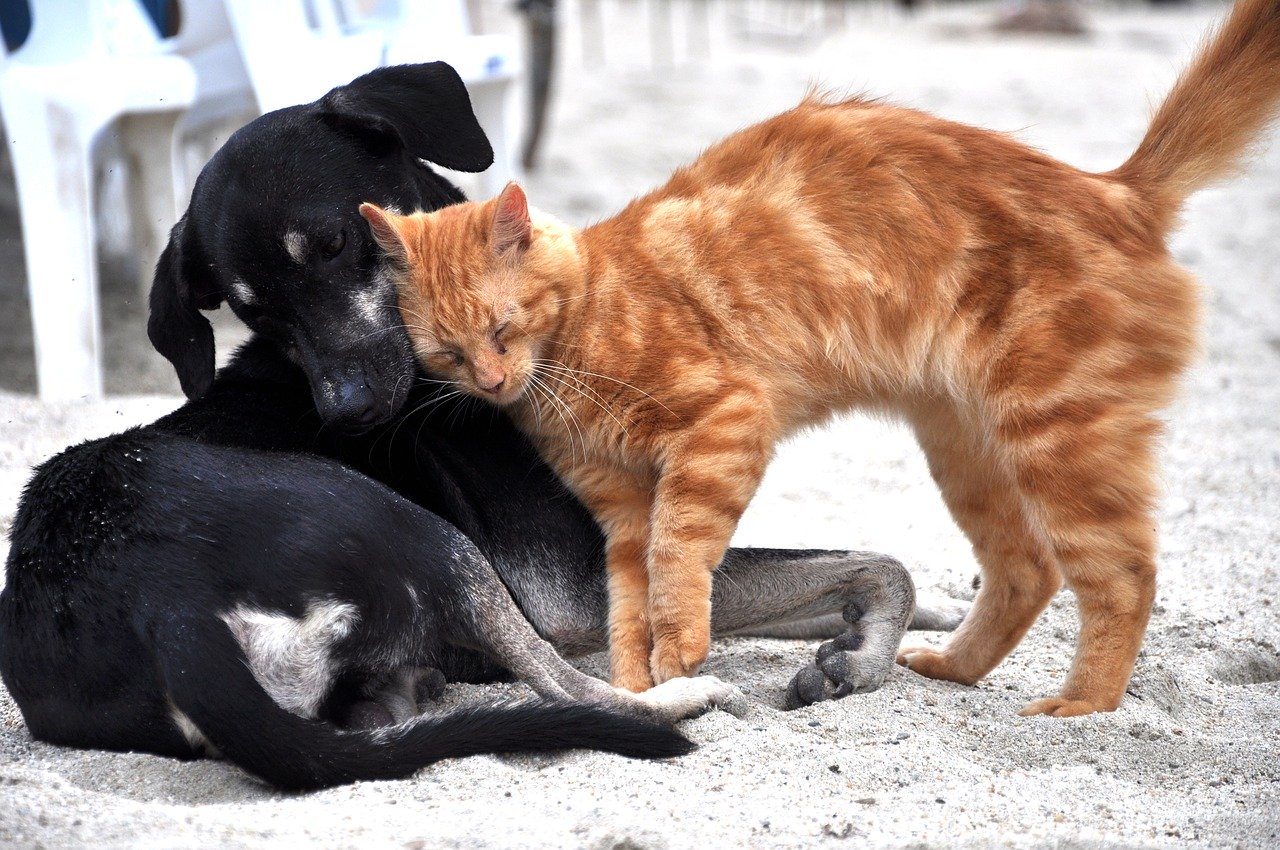 Like humans, many animals have been observed displaying altruistic behaviors. Altruism essentially means selfless concern for the well-being of others. Sometimes animals put themselves in harm’s way to help a creature in need and sometimes they simply provide comfort and attention when another animal is stressed out. Although we may not always understand exactly what motivates animals to behave altruistically, these behaviors demonstrate the complexities of animal behavior and cognition. They also make for inspiring and heartwarming content! Below are 10 adorable examples of animals helping each other out!

Sriracha the kitten suffers from a rare neurological disorder that causes balance problems and seizures. Some days she’ll experience particularly bad seizures that will leave her feeling off for a couple of days. During one of these periods, Batman the orphaned piglet became attached to the kitten. As shown in the video, any time Batman sense Sriracha is having a rough time, he cuddles up to her and keeps her company. While Sriracha might not ever have the “normal” cat experience, she has something much greater – the friendship of Batman. We all need a friend as intuitive and comforting as Batman! The best part is, Batman is likely not an anomaly – pigs are known to be incredibly intelligent and social creatures! Check out the video on Rancho Relaxo’s Facebook.

2. Geese Protect Piglet from Being Bullied by Other Pigs

If you’ve ever felt like the odd one out in your friend group then you can probably sympathize with this piglet! Naldol the piglet was weak since birth and often bullied by the older pigs. Luckily, Naldol found solace and safety in another, more unlikely group – a gaggle of geese! As shown in the video, these geese surround the small piglet and honk and peck at other pigs who threaten their friend. Although the piglet has trouble keeping up with the geese sometimes, they always wait for him patiently. They even groom Naldol and let him eat out of their food bowl! Check out the video on Kritter Klub’s YouTube!

Stray puppies are hard for anyone to resist and this Rhesus macaque is no exception! The pair bonded on the streets of Rode, India when the monkey took the puppy into his care. The monkey displays various protective behaviors towards the small puppy. For example, he grooms him, defends him from other dogs, and even lets him eat first. The puppy is always being toted around by this caring monkey and the two have made quite the spectacle in Rode!

At a zoo in Dublin, onlookers looked in awe and filmed an orangutan engaging in unusual behavior. Jorong the orangutan noticed a baby bird who was struggling to stay afloat in the water and miraculously, stepped in to lend a hand. Carefully, he used a leaf to give the bird something to grasp onto for leverage. Then, he gently picked up the bird and guided the tiny creature to the shore. As the cheers from the onlooking crowd signify, this behavior is astounding to watch! Because orangutans and many other animals are such complex beings, we should think twice before confining them in cages to be made a spectacle!

In quite a similar instance, a bear at the Budapest zoo noticed a crow drowning in the habitat’s surrounding water. The bear peered over the edge and gazed curiously at the bird frantically flapping for help. At one point in the video, the two animals make eye contact as the crow calls out. The bear then reaches a robust paw into the water and helps the bird out onto the edge. After rescuing this crow, the bear goes back to eating and meandering around, paying no mind to the crow. Seemingly, this bear could sense the distress of the crow and acted out of a pure desire to help the animal. Much like in the video of the orangutan saving the baby bird, the complex, compassionate nature of animals is enough reason to not want them to suffer in small, artificial enclosures for people to gawk at.

When Owen the orphaned baby hippopotamus was first rescued, he was shy and nervous. However, when he saw Mzee, the 130-year-old tortoise, he immediately knew he’d made a friend! Although at first Mzee was reluctant to accept the love of this exuberant little hippo, the two are inseparable now! While hippos are naturally very social animals, tortoises typically like to stay by themselves. However, Mzee was not immune to Owen’s charm. Ecologist Paula Kahumbu claims that Owen follows Mzee around like he would his mother and that the two swim, eat, and sleep together! Mzee even extends his neck to receive kisses from Owen.

Fred the 10-year-old labrador took on quite the responsibility when a flock of ducks was found without a mother at Mountfitchet Castle near Essex, England. Intrepidly, Fred took on the role of protector for these ducklings, who love to catch a ride on his back. He often takes the 9 ducklings down to the castle moat so they can practice swimming. As shown in the video, Fred has a calm, reserved demeanor around the ducklings which is perfect since these creatures are incredibly tiny and fragile. Despite the differences between ducklings and dogs, Fred displayed a seemingly intrinsic desire to help these orphaned birds.

8. Whales Save Seals from Orcas

Some of the most consistent and well-documented cases of animal altruism come from humpback whales defending smaller animals against orcas. These whales have been known to fight orcas to allow the prey to escape and sometimes humpbacks will even hide the prey in their fins and carry the creatures to safety. In any case, the whale doesn’t get much out of the exchange, and in fact, they put themselves in danger trying to defend these other aquatic animals. The exact reasons for this altruistic behavior are unclear, but this evidence supports a larger body of ongoing psychological research surrounding animal altruism.

Joule the rescue dog was always a bit anxious and clung to her human Brenna Eckert. When Eckert adopted Kelvin the cat she quickly realized the two made a great pair. But she did not realize the full extent of their bond until she installed cameras in her home to monitor what her companions got up to during her 8-hour workday. Joule became anxious anytime Eckert left for work, but the videos revealed that each day Kelvin routinely climbed up on the couch next to Joule to snuggle her and mollify her anxieties. Even more remarkably, this does not last for a few minutes or hours, but the duration of Eckert’s workday! Kelvin is the type of perceptive comforting friend we all need!

While on a surface level, these videos are simply heartwarming and sweet tales of animals helping each other, they actually elucidate the complexities of animal behavior. We still know so little about why animals behave in various ways. This uncertainty causes many of us to rely on anthropomorphizing wild animals or even our companion animals at home. This problematic anthropomorphism fails to grant animals a rich, nuanced inner life and instead judges them in terms of human standards. Species ranging from whales to bonobos to rats have all demonstrated what scientifically constitutes altruism, so the idea that this behavior is exhibited by a variety of species is definitely possible. After all, scientists once maintained that tool use was a skill unique to humans. So in between tearing up while watching animals caring for each other spend some time and think about how complex these creatures are and how we still have so much to learn about their cognition and behavior!

For related content on how intelligent and inspiring animals are, check out the articles below!