Last November, the ASPCA assisted the Animal Rescue League of Iowa in rescuing more than 500 neglected dogs from multiple sites across the state operated by Daniel Gingerich, a USDA-licensed breeder. Upon their rescue, many of these dogs experienced fresh air, healthy food, and clean water for the first time. With the support of other animal welfare groups, we helped remove and care for these dogs, some of whom still require specialized medical and behavioral support months later. An unknown number of dogs perished before we could help them, and all the damage inflicted on these dogs was entirely preventable.

Gingerich pled guilty to two animal neglect charges related to his now-shuttered commercial dog breeding facility. But while he is responsible for the cruelty inflicted on these vulnerable dogs, many other individuals and entities who ignored, enabled, and profited from Gingerich’s actions were not held to account whatsoever—from the Iowa dog broker who transferred 600 dogs to Gingerich in a single month to the 49 pet stores in New York and Florida alone who bought puppies from him and resold them to customers as “responsibly bred pets.”

A 2021 complaint filed by the Department of Justice details the horrific treatment of dogs at Gingerich’s licensed operation and illustrates the cruelties of commercial dog breeding and the inability of the USDA to stop it.

When Cruelty Gets a Pass

Daniel Gingerich and nefarious operators like him are part of an industry that relies on commercial breeders to mass-produce puppies at the lowest possible cost behind the scenes so others—including brokers, transporters, and retailers—can make the highest possible profit. The federal agency entrusted with the legal responsibility to oversee this heartless industry and ensure humane care for dogs in commercial breeding facilities—the U.S. Department of Agriculture (USDA)—needs significant and immediate reform.

For decades, insufficient oversight and enforcement by the USDA has encouraged large-scale cruelty to proliferate. Last year, while the USDA conducted more than 2,000 inspections of licensed commercial breeders—documenting sick and injured dogs, dogs living in cages too small to turn around with wastewater draining into them, and dogs suffering outside in freezing temperatures and searing heat—not a single facility lost its license or even paid a fine. The USDA did not remove a single dog from any of these licensed operations, even though they have the authority to do so. The agency has not revoked a license, issued a fine, or confiscated a dog from a commercial breeding facility in the last five years.

The Gingerich case illustrates how broken the system is. The USDA licensed Gingerich in 2019, and even though he failed to give USDA inspectors access to the property, they renewed his license a year later. 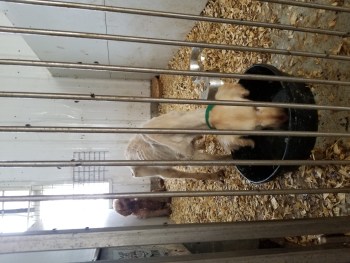 When the USDA finally inspected his property in April 2021, they found more than 300 dogs, including Golden Retriever #142, who were described as emaciated. Inspectors saw Golden Retriever #142 again the following month, reporting that she was in “even worse condition and had not been re-examined by a veterinarian.” In July 2021, Golden Retriever #142—later named Goldie—was found suffering in a barn with dead dogs. She had pressure sores, protruding bones, and no body fat. Gingerich ultimately surrendered hundreds of dogs to the Animal Rescue League, but Goldie sadly died at Gingerich’s facility.

It’s been more than a year since Goldie’s life was tragically cut short, but there is no sign of reform at USDA, which continues to look the other way. In May, the U.S. Department of Justice (DOJ) intervened to stop another USDA-licensed business, Envigo, from continuing to harm over 4,000 beagles. Similar to how they responded to the Iowa puppy mill where Goldie died, the DOJ presented evidence of horrific cruelty, including dead dogs, starving dogs, dogs in dangerous conditions, and dogs in need of veterinary care—all of which were documented by the USDA during “routine inspections” over months.

Despite this evidence, Envigo not only remains licensed to operate but had its license recently renewed by the USDA for another year, allowing them to continue operating other locations with impunity, leaving thousands of other dogs at risk in those facilities.

One Bill That Can Make a Difference

It’s unconscionable that while taxpayers are footing the bill for the USDA’s budget, the agency refuses to do its job. Thousands of dogs are languishing in puppy mills right now, and they will continue to suffer if the USDA continues to sit idly by. We can’t let that happen, so—in the spirit of Puppy Mill Awareness Month—we’re calling on Congress to support and pass Goldie’s Act, which was introduced by Rep. Cindy Axne (D-Iowa).

Goldie’s Act would institute meaningful penalties for animal welfare violations and require that conditions involving animal cruelty and neglect be shared with local law enforcement. Put more broadly, Goldie’s Act would ensure the USDA enforces the Animal Welfare Act, giving dogs in puppy mills the protection they are entitled to and the compassion they deserve.