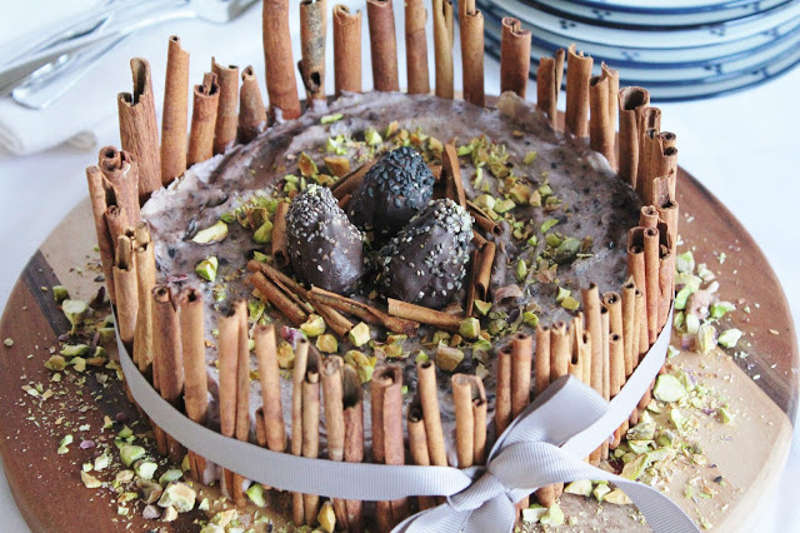 Here is my Easter gift to you! I actually had no idea what I was going to make until I began getting out ingredients yesterday morning and even as I was making it, I still didn't have a clear idea what it was going to end up being. But look how it turned out! It's just a sign of how easy raw food recipes are. Yeah, man. Yeah. I'll give it to ya straight: this recipe is an ice cream cake made of bananas and cashews with different layers of strawberry and blueberry. On top is a nest of cinnamon sticks surrounding coconut cream eggs. The "eggs" are simply dates filled with coconut oil, covered in raw chocolate. I also sprinkled on some chopped pistachios for colour and edged the cake with more cinnamon sticks.

Emily von Euw is the creator of the award-winning recipe blog, This Rawsome Vegan Life, and the best-selling author of four cookbooks: Rawsome Vegan Baking; 100 Best Juices, Smoothies and Healthy Snacks; The Rawsome Vegan Cookbook; and Rawsome Superfoods. Em’s passion in life comes from friendships, food, wilderness, mindfulness, art, and lots of dark chocolate. They have presented at expos and festivals across Canada and the US, and their work has been featured in publications around the world. Em lives in the lower mainland of British Columbia, Canada, on the traditional and unceded territories of the First Nations.