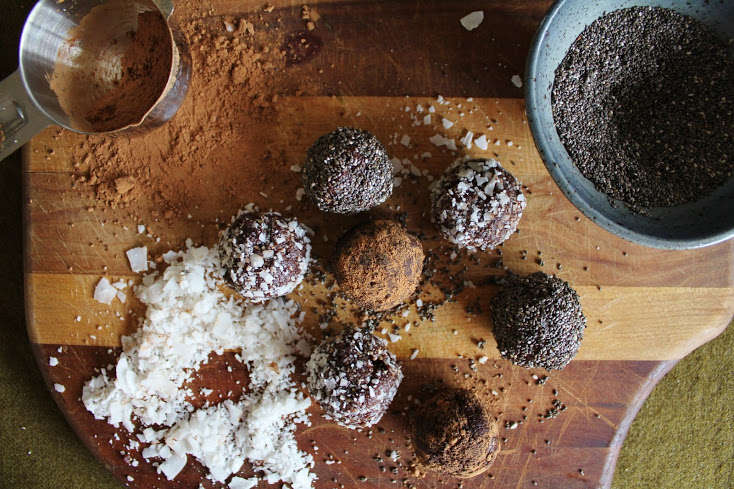 In addition to the hottest plant-based food trends that heated up 2013, one can’t forget the foods themselves. On top of acclaimed superfoods that continue to shine, this year brought more plant-based health foods into the light. Foods that for one reason or another were the subject of much talk. Although each certainly had its individual time of well-deserved attention, it’s only fair to give 5 of the Hottest Plant-Based Health Foods of 2013 a loud round of applause as the year comes to a grand finale.

If there’s one food you should have heard of, if not tried out this year, it’s jackfruit. While on the outside it may look prickly and intimidating, on the inside, it’s filled with fleshy bulbs, or pods. In May, E! gave a shout out to jackfruit, noting it as the new go-to in the meat substitute world. The first time I spied a photo of a jackfruit dish this year, I was equally puzzled and intrigued. This fiber-licious fruit is a substantial source of vitamins A, B, and C; is packed with isoflavones, antioxidants, and phytonutrients; and is already giving seitan, tofu, and tempeh some healthy competition. Much like these substitutes, jackfruit willingly takes on the flavor of whatever it is cooked in or with.

Expect to see this wonder fruit popping up on more menus in 2014, and hopefully making its way into your kitchen. If you’re not ready to get your hands on fresh jackfruit quite yet, it can be purchased frozen, dried, or canned.

Looking to get your jackfruit fill? Try out this recipe for a Jackfruit Philly Cheesesteak sandwich.

The United Nations designated 2013 as the International Year of Quinoa. Although the dialogue remains open regarding the impact on the origin nations from which quinoa is harvested, there is no doubt that this powerful grain-like seed has received much attention and praise in 2013. It’s proven itself as a versatile staple that works wonders in just about any dish. It is simple to prepare, serves as a whole form of protein, and is an ideal substitute for pasta or rice to accompany your vegetables.

Didn’t get enough quinoa this year? Challenge yourself to get a bit more creative with it in 2014. Here’s a look at how to achieve 7 Days Full of Quinoa to get you started.

Coconut is certainly not a new food. Ancient cultures appreciated it and recognized its features long before we did. Over the last few years, we’ve seen coconut take on newly appreciated forms, from the hype of coconut water, to coconut milk serving as a dairy-free alternative across a growing number of entities, and coconut kefir, a go-to probiotic drink for those who avoid dairy milk or simply enjoy the rich flavor of this drink.

Now on the front line, is coconut oil. This year, coconut oil has become something herbivores just can’t live without. Nearly every week it seemed to be receiving some form of praise amongst the natural health world and beyond, for any one of its overwhelming health benefits, and has made itself valuable as a remedy for just about everything. On top of supporting overall heart and brain health, coconut oil helps to fight various bacteria, viruses, and fungi, internally and externally. The topical uses for the oil range from skin moisturizer to hair conditioner. Coconut oil has quickly become a staple in many households and promises to continue to gain an even greater presence in the food and natural health world in the new year and beyond.

Chia seeds are proof that something oh so tiny can be of great value. Early in the year, ABC News called chia seeds the “it” food of 2013.

This year, chia seeds have taken over flax as the number one “work into any and every meal possible wonder seed.” Unlike flax seeds, they don’t need to be ground for use. With an unmatchable omega-3 content, plus being loaded with minerals and fiber, how could anyone not love these seeds? They have been praised for serving as disease managers and for their role in disease prevention.

Chia seeds are so small you can work them into your daily meals in endless capacities. Chia pudding works great for a powerful, fiber, and protein rich energy boost at any time of the day. For more chia reassurance, plus a few product suggestions, read up on all the chia glory here.

True, when comparing faux meat and cheese substitutes to a whole fruit or vegetable, one might be hesitant to call these products health foods. But compared to the alternative, actual meat and/or cheese, it’s another story. And for that, the companies we’ve seen step up and offer the latest and greatest in faux meat and cheese this year deserve recognition.

Still in its infancy, Beyond Meat expanded its foothold this year with increased visibility and an increased number of products landing on grocery shelves. To add to its popularity, chef, best-selling author, and Food Network host, Alton Brown, wrote an in-depth piece for Wired Magazine’s food issue this Fall, titled “Tastes Like Chicken,” recounting his visit to Beyond Meat’s factory, where he raved about the taste and texture of the products.

“As I feel it breaking down meatily in my mouth, I think: these guys may be on to something,” he said, after sampling the product.

The piece closed with a thought-provoking quote from Beyond Meat CEO, Ethan Brown (of no relation to Alton):

“In a few generations, vegetable-based meats may be the only meat some young people have ever experienced,” he stated.

That’s what we herbivores love to hear.

Meanwhile, over in the cheese department, this summer Daiya launched new products to accompany their shreds and wedges already on the shelves. The lineup now includes slices and cream cheese style spreads. And Daiya even jumped into the frozen food world with pizzas.

What will be the latest and greatest in 2014? Maybe an artificial egg? Only time will tell.

In the meantime, if you are looking for more plant-derived health foods to munch on to jumpstart your diet in 2014, check out The Ultimate Superfood Guide.