Global Vegan: Traditionally Vegan Dishes From Around the World 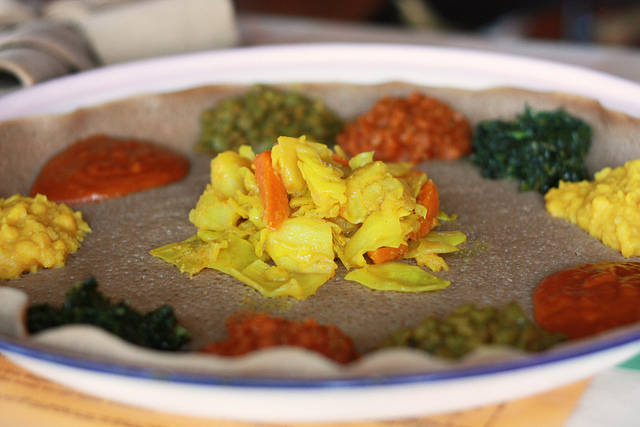 In the United States, the vegan population is growing larger by the minute. All-vegan restaurants are popping up everywhere, and in places like New York City you could probably eat at a different veg restaurant every day. A lot of non-vegans make the claim that humans are naturally a meat-eating species, but many cultures have traditions that make finding vegan dishes anywhere quite simple.

Most of us know that it’s easy to find traditional Thai, Vietnamese, or Mexican dishes that are vegan, but many other parts of the world serve up vegan food regularly despite a lack of vegan culture.

In Ethiopia there is a large Orthodox Christian population who avoid animal products during Lenten fasting times. Therefore, many of their dishes are inherently vegan. Ethiopian dishes are generally based on grains and spices and wats, onion-based stews, are also very popular. Berbere, an Ethiopian chili powder, provides flavor in many of these recipes. My favorite dish to order at a restaurant or cook at home is chickpea Wat. Ethiopian dishes are generally served communally and eaten with fermented flatbread called injera because it is believed that people who eat from the same plate and break bread together will create a bond of friendship and personal loyalty. Gather some friends and break bread together, it will be delicious and cruelty-free!

The majority of the population in India practice Hindu, Buddhist, or Jain faith. Hinduism holds cows as sacred, and killing animals is seen as an obstruction of the way to heaven. Hindus and Buddhists believe in reincarnation and therefore the fact that the human soul may inhabit an animal in the future. In the Jain religion, the taking of life is prohibited. It is estimated that one quarter of the Indian population is vegetarian, and finding a vegan meal is hardly difficult. My favorite Indian dish is the spicy and hearty Aloo Gobi, made of potatoes and cauliflower and often served with rice or bread.

Since most of the Indonesian population is Muslim, there is no vegan culture as there is in Hindu or Buddhist areas. However, since Indonesia is rather poor, animal products are a luxury and soy products are a major protein source. In fact, tempeh is an invention of Indonesia. As in many Asian cultures, the dietary focus is on rice, a bland food by many standards. The flavor in these dishes is imparted by the accents, often highly spiced vegetable sides. Shallots and garlic find their way into most Indonesian recipes. For a simple Indonesian dish that’s sure to please try Ketoprak, a cooked vegetable dish with vermicelli noodles topped with a delicious sweet soy peanut sauce.

As in Ethiopia, Greece has a large Orthodox population who fast during Lenten times, meaning they eschew animal products. Though when you think of Greek food it’s likely that heavy meat dishes come to mind, a food cart favorite is actually traditionally vegan. Falafel with tahini sauce, sometimes served in a pita, is chickpea-based with a complex blend of herbs and spices. The tahini sauce is creamy and tangy and makes a pleasant mess when dripping out of a pita.

What if you want a traditional vegan dessert recipe? Look no further than haroset. Haroset is a Jewish dish served during Passover in contrast to the bitter herbs often present in Seder dishes. Since Judaism demands both humane treatment of animals and protection of human health, it comes as no surprise that there are a few inherently vegan recipes.

Don’t let anyone tell you that veganism is limited to the United States. Finding a vegan meal in most traditional cultures is easy and delicious!