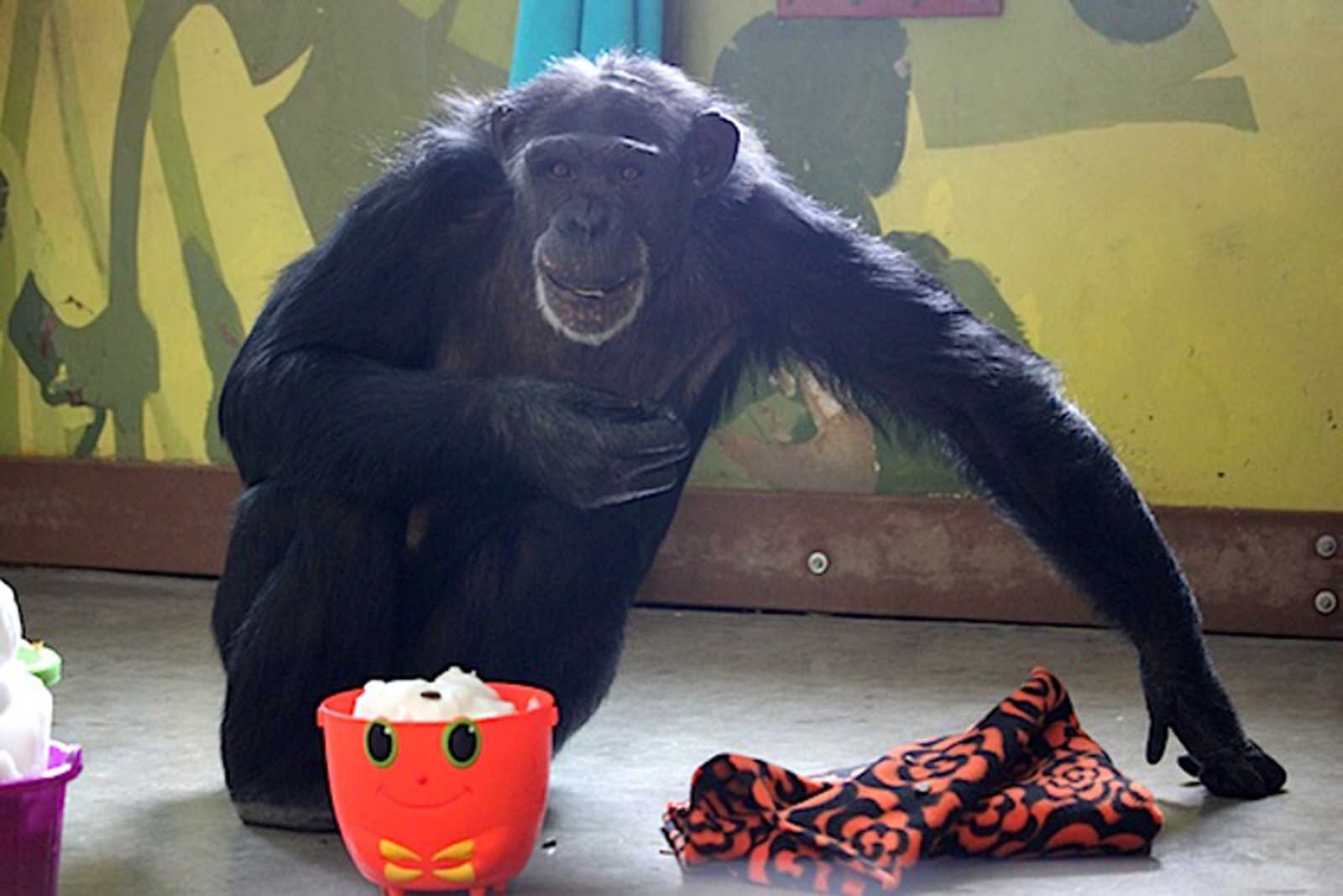 Have you ever been somewhat wary about trying a new food for the first time, before coming to realize that it is, in fact, the best thing EVER, and you can’t get enough of it? This was what recently happened to a group of rescued chimps at the Chimpanzee Sanctuary Northwest (CSNW) when they woke up to find the ground covered in snow.

Three of the chimps – Missy, Burrito, and Annie – bravely ventured to try out this strange new substance first. Their carers reported, “They each took turns stretching out of the doorway to grab handfuls of the fluffy stuff.” The humans then decided to turn the snow into a specular treat, by filling up a number of buckets with a tasty mixture of snow, sunflower seeds, and pumpkin seeds. Having never seen snow before, the rest of the chimps were alight with curiosity, and immediately set about investigating it!

They were initially bewildered by the strange new snack food before them. 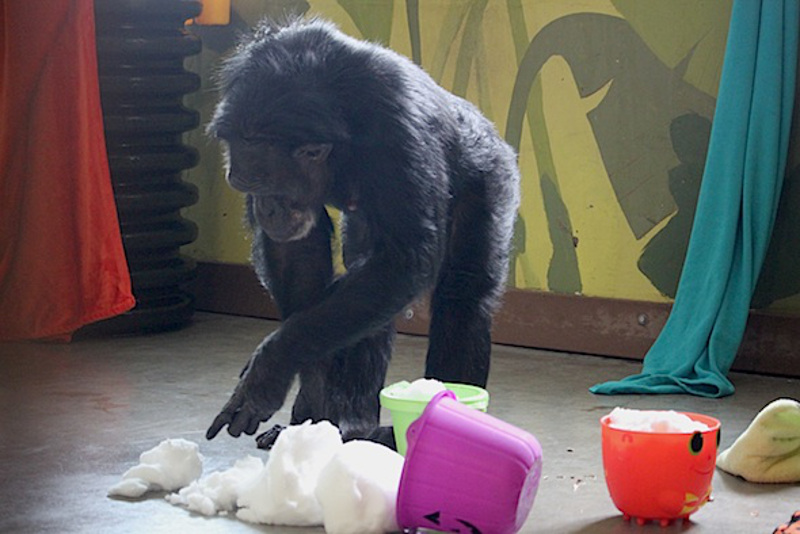 At first, there were a few tentative nibbles… 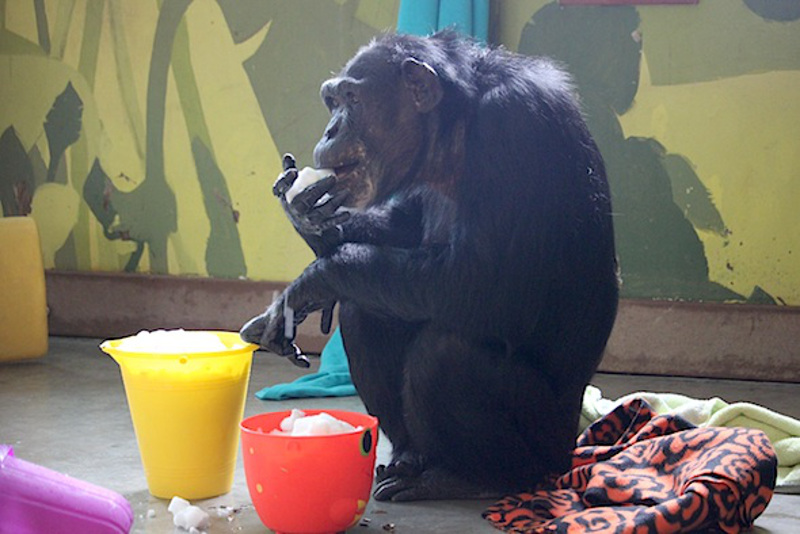 … but the chimps soon realized that they were in for a treat! Have you ever seen a cuter smile? 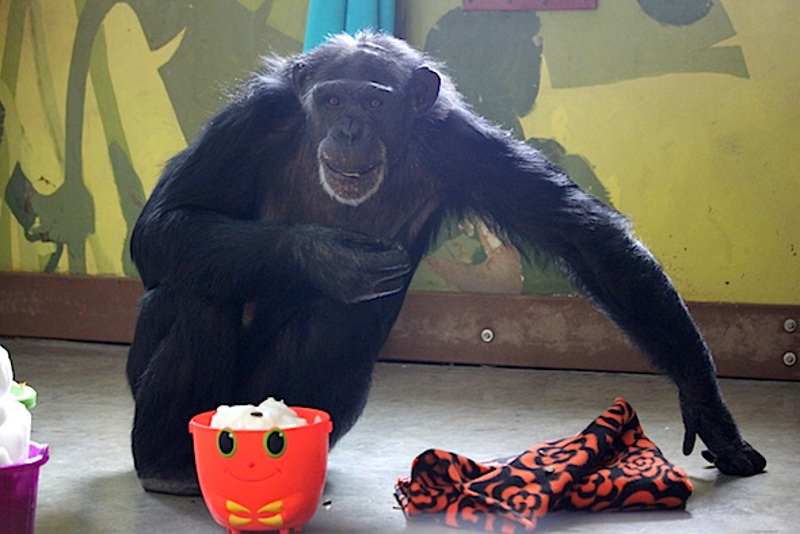 A chimp named Jody “inspected her options before relaxing with a big mouthful on the stairwell.” 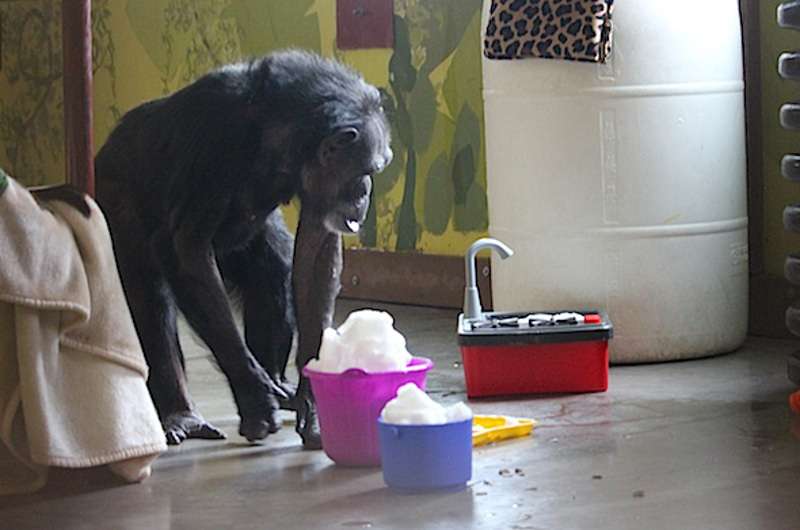 She wasted no time in gobbling down as much snow as she could. 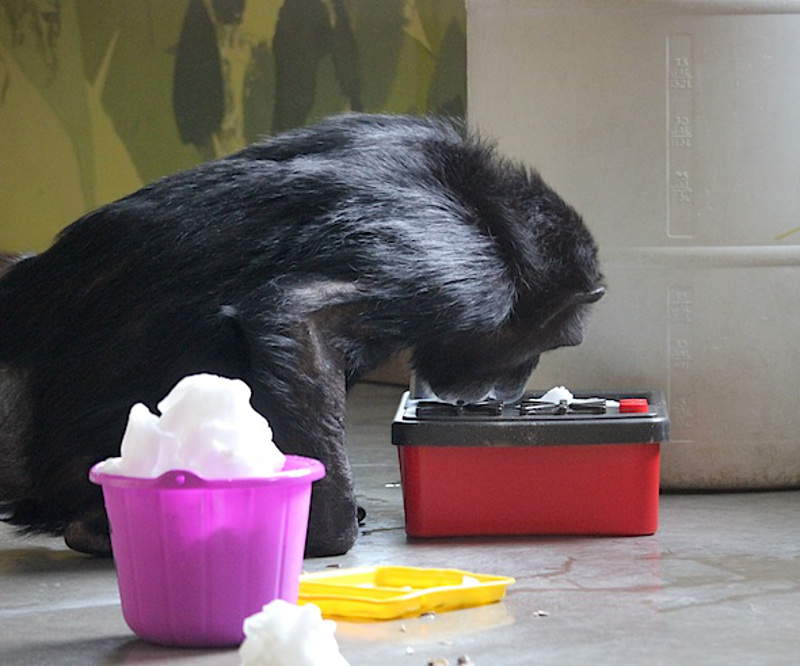 “Hmm … what’s the best way to deal with all this excitement?” 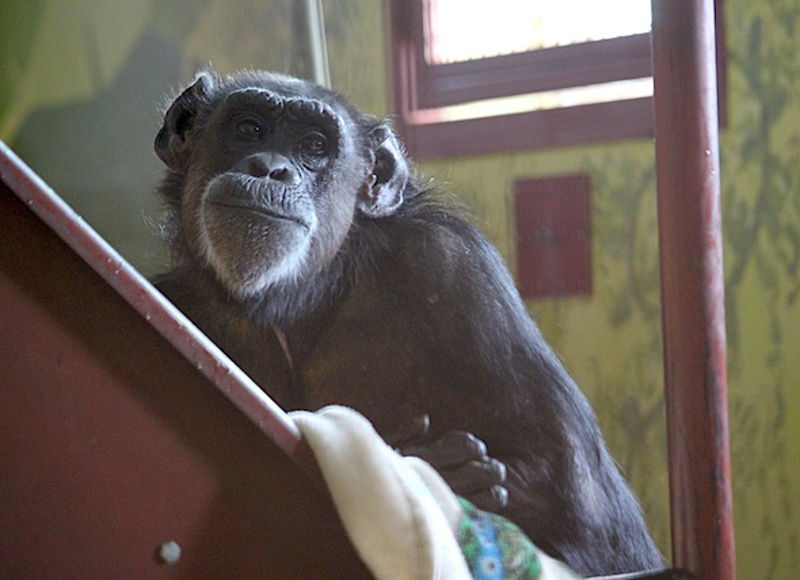 One of the chimps, Burrito, decided that the best course of action would be “to just grab a bucket and shovel in as much as possible.” 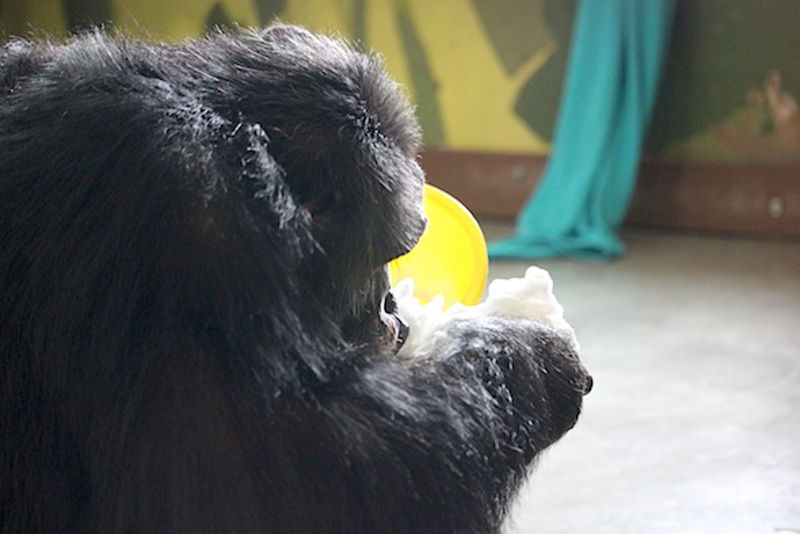 Foxie took the time to explore her options thoroughly. 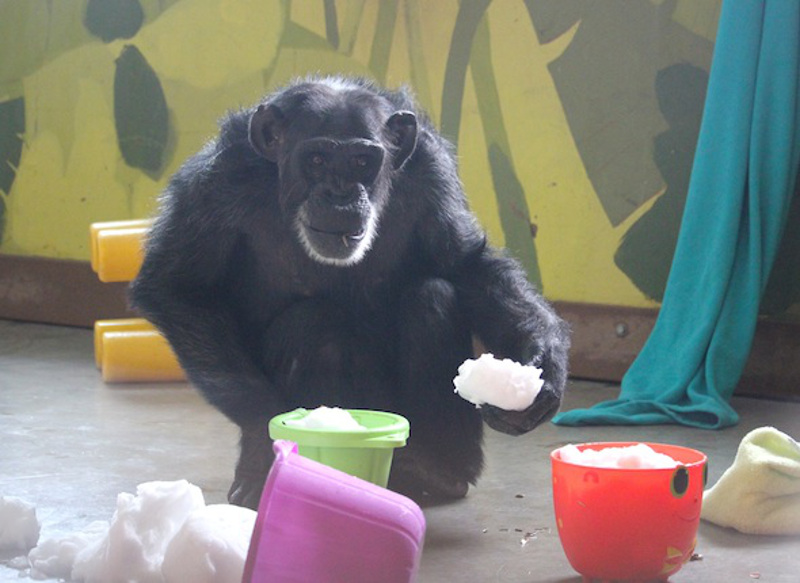 She investigated all of the buckets, keen to discover which one contained the tastiest snow. 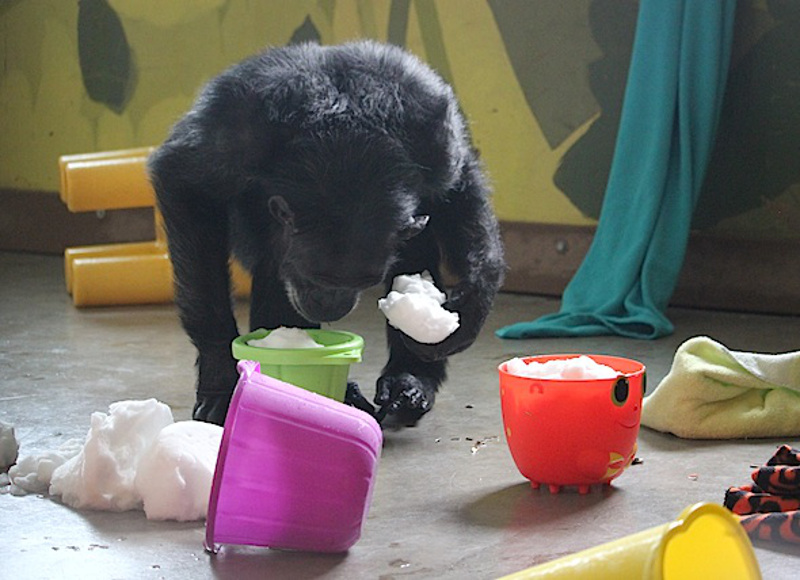 After all the excitement, the chimps were in need of a much-deserved rest! 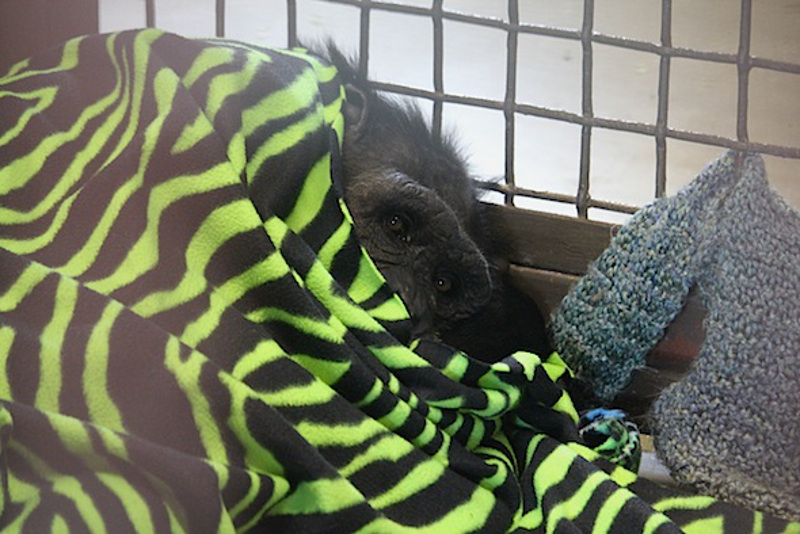 This sweet story shows that these curious, intelligent, playful animals deserve to be free – not imprisoned in zoos, or used as research subjects for human purposes. Thanks to the kind people of CSNW, the chimps featured in the photographs get to enjoy a relaxed, joyous standard of living, free from the threat of human interference. To learn more about the organization’s work, visit their website or Facebook page. You can find out how to help them here.