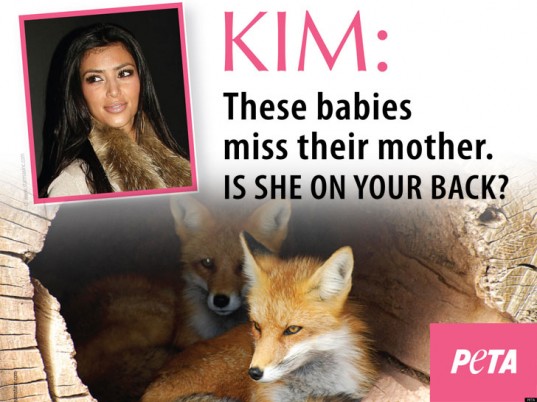 The billboard shows an image of Kim Kardashian wrapped in fur next to a pair of young foxes and a message that reads: “KIM: These babies miss their mother. Is she on your back?”

“Kim knows that animals on fur farms are beaten, electrocuted, and often skinned alive,” said PETA Senior Vice President Lisa Lange. “We’ve explained it to her, and she’s watched a video expose that was filmed inside fur farms. When Kim is ready to put an end to her relationship with fur, PETA will be happy to take her discards and donate them to the homeless.”

Ironically Kim’s sister, Khloe Kardashian starred in PETA’s “I’d Rather Go Naked Than Wear Fur” campaign back in 2009. After Khloe sat down with PETA representatives and watched videos of how animals are skinned for fur, she immediately agreed to pose naked for their campaign. She explained that once she understood how the animals were treated, there was no doubt that she wanted to help PETA’s campaign by starring in their campaign.

Maybe someday Khloe will convince Kim Kardashian to do the same.