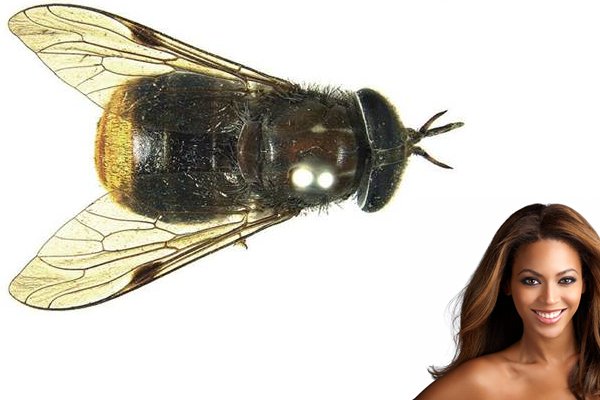 Celebrated recording artist Beyoncé has a new honor to put on her mantle piece next to her Grammys and other music awards. She will have the distinction of having a species of Horsefly named in her honor!

This “bootylicious” [couldn’t resist!] fly has been given its moniker due to its distinctive golden butt. The Commonwealth Scientific and Industrial Research Organisation‘s Bryan Lessard believes that this peculiar feature makes it the “All time diva of flies.”

Lessard hopes that this honor will “demonstrate the fun side of taxonomy” and it does add a little flair to the science.

The rareScaptia (Plinthina) beyonceae species of horse fly was collected in the same year as Beyoncé’s birth, 1981, from north-east Queensland’s Atherton Tablelands. It is one of almost 4400 species of horse flies have been described from all biogeographic regions of the world.

As of today, Beyoncé has yet to respond to CSIRO’s attempts to inform her of the honor, but hopefully it’s only a matter of time before the new mom gets a chance to speak about her recent namesake.