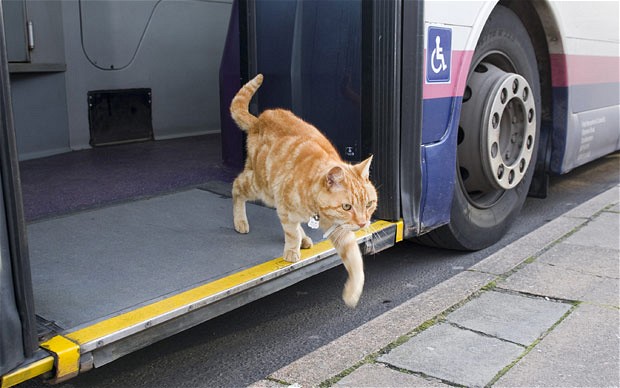 The environmental benefits of public transportation versus our beloved cars are a well known fact, but it’s nice to know that even our feline companions are putting their money where there bus pass is.

According to The Telegraph, the “Artful Dodger” a 15 year old ginger cat from Dorset makes up to 10 mile round trips from Bridport to Charmouth.

The cat is happily welcomed among locals and according to owner Fee Jeanes, 44 “He is an old boy and is very friendly. At first Dodger kept going to the bus station because people there fed him tit-bits and scraps of food. But then he started climbing on board the buses because they are almost like greenhouses when it is sunny.”

The missing cat originally alarmed Jeanes who said “I couldn’t believe it and panicked. I got into my car to go off and look for him and then at that moment the bus pulled up near our house and low and behold he got off.”

The cat peacefully rides the bus sometimes sitting on the laps of patrons. The public transportation officials find him to be more of an amusement than a nuisance even joking that “Given this cat is elderly we suspect it would be eligible for free travel, perhaps a bus puss, if such a thing existed.”