Sprouted Grains: Are They a Healthy Choice? 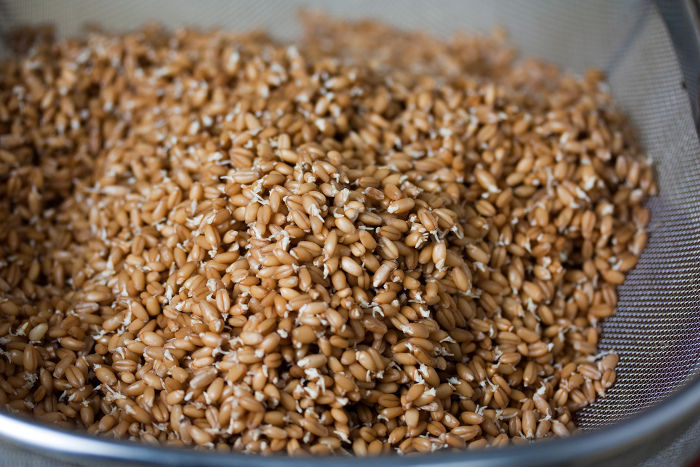 Sprouted grain products are sproutin’ up everywhere. You’ve probably heard of them — maybe in sprouted-grain pasta or flour at Whole Foods — but are they really a healthy choice?

To answer this question, first, let’s talk about grains in the human diet …

Humans have been eating grains, like wheat, corn and rice, for about 10,000 years (or about 7,000 if you’re of European descent and much less time for some American populations). Some experts argue that grains aren’t ideal for our bodies because they contain toxins, and our bodies haven’t been eating them long enough to adapt to them.

But others believe whole grains can be great additions to your diet. After all, grains are rich sources of nutrients. However, they can be difficult for human bodies to digest. Plus, our bodies have a hard time obtaining all their nutrients because their goodness is wrapped beneath a hard shell (the seed coat).

To get the most possible nutrients and antioxidants in your body, try soaking or sprouting grains before cooking them. Here’s how it works: Sprouting jumpstarts the germination process, making grains more digestible (and less toxic), enhancing their nutritional availability, increasing their antioxidant content and more — all good things for your health.

A brief history of grain consumption

Non-industrial cultures prepared grains in a variety of ways including sprouting, soaking and fermenting. Some cultures would even sprout their grains unintentionally by harvesting grain, tying it into sheaves, and then leaving it in the field exposed to the weather a while before gathering the grain, which would begin the sprouting process.

When looking at the diets of traditional cultures, it’s clear that all cultures had some method of preparing grains — practices that did not make it into our modern way of eating due to our desire for quick consumption.

Should we still prepare grains?

Sprouted grains are healthier. Here’s some research that shows why:

Sprouted grains also reduce greatly phytic acid, gluten and lectin. Phytic acid is a chemical in the bran of all seeds that inhibits the absorption of calcium, magnesium, iron and zinc. Lectins are harmful to our bodies because they disrupt our immune systems.

On the other hand, some people say that the difference in nutrients and antioxidants is too small to improve the health of a person. Plus, at least some sprouted grains produce other toxins, like benzoxazinoids (although not much research exists about them).

So are sprouted grains it really worth the extra trouble and cost?

Sprouted grains do cost a considerable amount more than regular whole grains, so people on a budget may not be able to afford them; but, people could sprout their own grains rather than buying already sprouted products (here’s a sprouted product review or keep reading for more product recommendations).

Vegetarians and vegans may choose to consume sprouted grains because they deliver all the amino acids necessary to make a complete protein, and they help ensure iron and zinc needs are being met.

Other people who should at least try sprouted grains include those who complain of GI distress after eating cooked grains and legumes and people who are sensitive to gluten. (However, people with celiac’s disease should not consume sprouted grains.)

Overall, further research is needed in this area, but if you can afford it or you want to spend some time to sprout your own, most of the current research seems to suggest that sprouted grains are the healthier option, especially for vegetarians and vegans. (Now that you’re caught up on sprouted grains, read why you should bake with sprouted whole grain flour.)