Guarana: Get Energized with this Amazonian Superfruit!

Guarana (gwa-ra-NAH) is the fruit of a climbing, flowering shrub native to Venezuela and northern Brazil in the Amazon rain forest. The small fruits range in color from brown to red, and contain black seeds which are partially covered by a white fleshy, covering, or arils. The appearance of the open fruit has been likened to eyeballs.  Yum!

When the guarana bean is roasted it takes on a remarkable likeness to that of a coffee bean, and as far as taste goes, well, it’s quite bitter if consumed as is.  However, with the addition of some serious sweetening, the mild apple-berry like flavor is quite pleasant.  That explains one reason why the fruit has long been used as a flavoring ingredient in beverages and candy;  guarana drinks and sodas are very popular in Brazil, almost as popular as cola-based sodas.  In North America, guarana has recently become a popular ingredient in energy drinks and teas.

Another possible reason that guarana has made its way into, and become such a popular base for soft drinks?  The seeds are super rich in caffeine, even more than coffee beans!  It is also reputed that the seeds can enhance athletic performance and stamina, reduce mental and physical fatigue, and improve memory and alertness.   To note, some folks do experience jitters after consumption of this high powered plant food, and is advised that guarana not be used by people who are sensitive to caffeine or xanthines.

Looking for an alternative to your daily cup of joe?  Maybe give guarana a go! 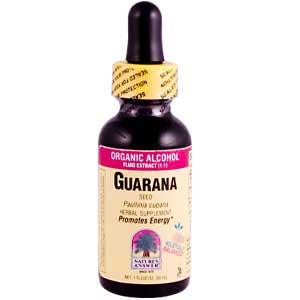 Liquid extracts can be absorbed by the body faster than tablets or capsules and are more potent than tinctures. Holistically Balanced guarantees that the constituents of the extract are in the same synergistic ratios as in the plant.