There is no denying that the list of superfoods is growing and growing. These foods have gained their “super” title for their ability to pack a huge amount of nutrients and health benefits all in a tiny – often delicious – package. From moringa, maca, quinoa, amaranth, spirulina, and beyond, superfoods are becoming a much more regular part of many people’s diets, however, there is still a wealth of these nutritional gems that haven’t been given the recognition they deserve. One of such being the leafy wonder known as Chaya.

Chaya sometimes referred to as tree spinach, and it is yet another powerhouse that we should all be happy to welcome into the fold, especially if that fold happens to be some sort of delicious wrap.

What? People Have Been Eating This for Centuries!

It should not really be all that surprising, considering that all of the aforementioned superfoods were commonly used in ancient civilizations, but for the sake of a gasp, chaya’s amazing nutritional punch has been recognized for centuries, millennia even. The Maya were onto this leafy vegetable long ago, and it once featured regularly in their daily diets.

What are the Benefits of Chaya? 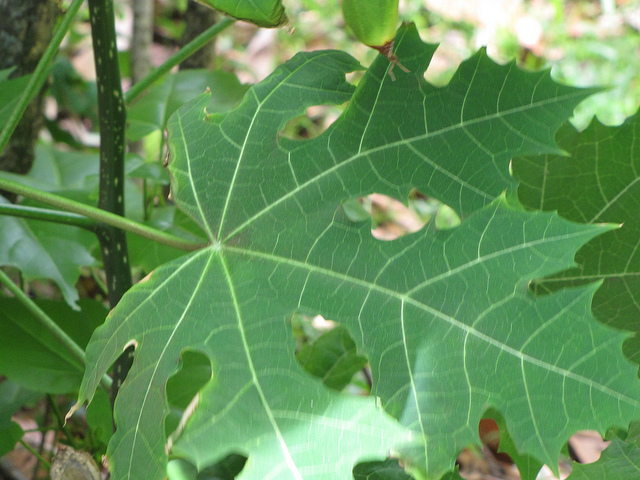 Chaya comes from the Yucatan area of Mexico, and in conversation, people often mistake it for another Mexican treat: chia, an integral part of the Aztec diet. However, like chia, chaya is packed with vital nutrients and dwarves the amounts in other, well-respected veggies.

Here are some of the goods. Chaya has high levels of protein, calcium and iron, nutrients many people are concerned about. The leaves are also chocked with carotene, potassium and vitamin C. Studies have shown the nutritional content of Chaya to be two or three times that of foods like spinach and Chinese cabbage.

For those of us into permaculture and growing our own eats at home, the news gets even better. Unlike spinach and cabbage, Chaya is a large perennial shrub that, un-pruned, can grow up to twelve feet high. Because it’s perennial, we won’t have to plant it repeatedly, dealing with all of the things and costs that go with that. What’s more is that such a large bush, of which we can take up to 50 percent of the leaves, yields a much larger crop.

Chaya has already migrated to Florida and south Texas, where climates remain a bit more sizzling and steamy. It does not like freezing, thus may not work well in many gardens throughout the U.S. However, for those of us growing indoors, it might prove to be quite a nice container plant, moving it in in the winter and out in the summer, with a good edible contribution to make.

How Can You Put Chaya on the Dinner Plate?

Most likely, the biggest challenge to getting chaya onto the dinner plate, barring those who live in Florida and South Texas, will be finding some to use. For those interested in trying chaya, plants are available online, and from there, a replenishing source can be enjoyed.

The last, and very important thing, to be aware of is that Chaya must be prepared with some caution. Like many foods, including spinach, cassava, almonds, there is a toxic substance — a form of hydrogen cyanide — that most be neutralized before consuming the leaves. It sounds scary, but this issue is solved quite simply by boiling, frying or drying the leaves. Cooking gets rid of the compound.

After that, treat the leaves as a replacement for spinach. It’d sub in well in any of these recipes: