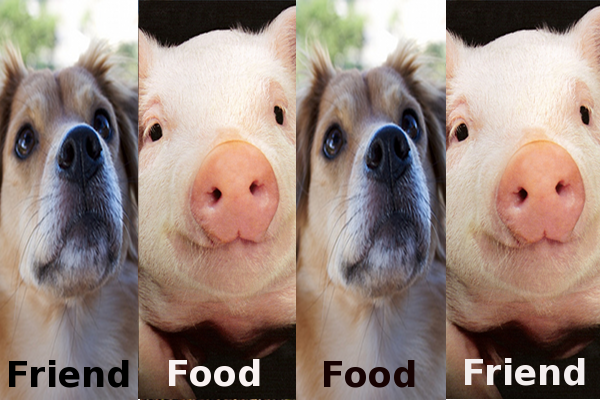 Why do people who care about the welfare of animals continue to eat them? This seemingly simple question often leads to spirited debates about morality, nutrition, sustainability, and can even upset and enrage people who have barely spent much time thinking about the issue. When most of us find out about the dark realities of industrial animal agriculture, we typically respond to such an obviously flawed industry in ways that range from deciding to buy humane/sustainable animal products to doing absolutely nothing. What’s stopping more rational and empathetic people from just opting out of the entire system that is responsible for such products as the most obvious solution? The answer may go beyond conflicting opinions we have about morality, health or environmental issues.

“We need to eat animals”

Granted, we (at least an overwhelming majority of us) love the taste of meat and by-products of animals. There’s no denying this fact and although we may arbitrarily choose to live with some animals and eat others due to traditions and social norms, our appreciation for the taste of animal-based foods in general, has not diminished over the ages. To make matters worse, we’ve been culturally conditioned to believe that there were no alternatives to eating certain animals or that the alternatives were not practical or healthy enough. Psychologist and acclaimed author, Dr. Melanie Joy calls this invisible belief system “carnism” and points out that “There is a vast mythology surrounding eating animals, but all myths fall in one way or another under the Three Ns of Justification: eating animals is normal, natural, and necessary.”

Surprisingly, even after being presented with extensive facts on the negative animal welfare, environmental and human health consequences of eating animals, a majority of us continue to cling on to this belief system by claiming that not consuming them could somehow be more harmful to our health or the environment. In a fascinating new article, Dr. Joy examines these new carnistic justifications (or “neocarnism“) that acknowledge the three pillars of the argument against eating animals (animal welfare, the environment, human health), but seek to invalidate them by presenting humane and sustainable animal products as the real solution.

The choice to not eat animals seems like such a challenging one because not only does it go against what our taste buds have grown accustomed to, but it also conflicts with our deep-rooted cultural conditioning.

It’s easy to dismiss anyone advocating avoiding animal products as a purveyor of a conspiratorial agenda to rid the world of happiness! This is because, over the years, animal products have become independent cultural symbols that are disassociated from the raw materials that they rely upon. For instance, ask anyone who enjoys eating hot dogs and they will tell you that they enjoy the taste, smell and look of the food and aren’t thinking of, or necessarily associating it with the animal it came from. If anything, people generally don’t want to be reminded about what went into the production of their animal-based food (especially hot dogs!) when they are consuming it. In this case, the hot dog has acquired secondary meaning in the mind of the consumer and the fact that an animal is involved is merely incidental to the idea of what they are consuming. Therefore, when someone challenges another’s choice to eat a hot dog, citing morality, health or the environment as a concern, it’s perceived as a threat to the idea of a hot dog (the cultural symbol), more than a threat to their choice to kill and eat living beings.

In addition, the consumption of animal products has been associated with religious traditions and can often be tied to gender and social identity as well. For example, meat eating is regarded as a symbol of affluence in the developing world and is generally associated with strength, virility and masculinity in western culture. Carol J. Adams, author of the groundbreaking book The Sexual Politics of Meat, recently wrote an excellent article examining how this stereotypical connection between meat eating and manliness continues to be reasserted even today by cultural arbiters ranging from magazines, fast food restaurants and cologne makers.

Therefore, it should come as no surprise that most meat eaters don’t react positively when their choice to eat meat is put into question, especially because the choice is perfectly legal, socially acceptable and in many cases, tied to their own cultural identity.

“Humans have conquered the food chain”

We have indeed, but where has it gotten us? Our exploitation of land, animals and people as economic resources is part of a long-standing human culture of domination. This cultural mindset has led to the unabashed use of animals like commodities, with complete disregard to their interests, human health or the impact on the environment. Although we may all not be directly involved in such patterns of exploitation, each and every one of us (as members of human society) implicitly participate via our consumption choices.

If we (whether we consume animal products or not) are truly concerned about creating a better future for ourselves, animals or the environment, we have to begin by challenging our culture of domination and fostering genuine respect for the interdependent nature of all life on this planet. Lee Hall, author of the book “On Their Own Terms: Bringing Animal-Rights Philosophy Down to Earth” puts it eloquently: “The deepest and most comprehensive question for our social movement is why and how modern human society has developed through patterns of domination; and the greatest challenge we face is imagining humanity without the master role.” She’s right in pointing out that this is a great challenge, but if we manage to rise and meet it, we will realize that relinquishing our position of perceived superiority over the planet may in fact be more beneficial to us in the long run.

Once we as a society recognize that we ought to extend our duty of care beyond our individual selves and our communities, into the environment and every living thing, issues such as environmental consciousness, wildlife conservation, human rights, animal rights and veganism turn into more than choices, and become the logical outcome of the ecologically ethical lens through which we view the world.

The real question is if we genuinely care about the lives of animals, can we reconcile that notion with a choice to harm them? In a state of denial, even the most rational argument for avoiding animal products will likely seem extreme, impractical or unhealthy. However, if we accept that a better way exists, and the only thing stopping us is a cultural veil that obscures our thinking, we may be able to lift it eventually. This doesn’t mean that the cultural symbols associated with animal based foods have to die — they just have to be transformed! Animal-free alternatives are not restrictive and can taste just as good (if not better) than what we’ve grown accustomed to over the years. In fact, most people find that the experience of aligning their choices with their virtues can be truly liberating.

We may argue till the cows come home (no pun intended) about the moral, health and environmental reasons why we should or should not consume animals, but we can’t ignore one undeniable truth: eating animals is a choice….a choice we can learn to live without.

This article was also featured on The Huffington Post