Going Green Begins With What’s On Your Plate 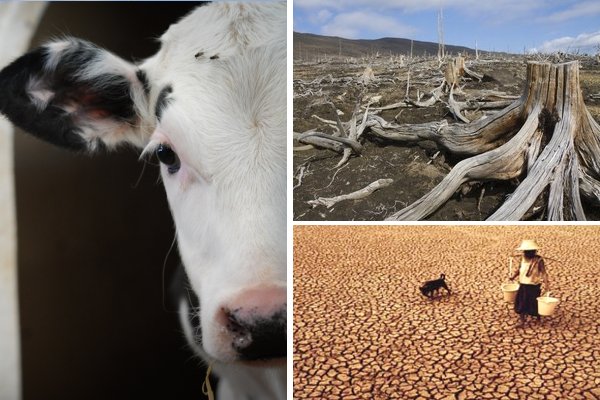 The food and drink an average person consumes are the single largest determining factor of one’s overall ecological footprint. Why is this good news? Because knowing this, it’s easy and affordable to make important improvements to our global impact. You don’t need to buy a hybrid or get solar panels to make the biggest difference; just changing our shopping and eating habits to delicious plant-based choices can have positive effects.

Our food choices have dramatic consequences on the environment. Reducing or eliminating the consumption of animal products is one of the most powerful ways an individual can reduce his or her carbon footprint. What we put into our bags at the grocery store actually has more environmental impact than whether we bring a reusable shopping bag or drive a hybrid to the store.

Animal agriculture is responsible for many of the world’s most serious environmental problems — global warming, water use and pollution, massive energy consumption, deforestation, loss of biodiversity and species, as well as the deep impact of fishing on our oceans. A 2010 Report from the UN International Panel of Sustainable Resource Management strongly urges a global shift to a plant-based diet to both feed a hungry world and greatly reduce environmental impacts like global warming.

Unfortunately, recognizing animal products for the global warming culprits they are is an abstract concept. Identifying carbon emissions from, let’s say, a car, is much more observable. The fossil fuel gets pumped in and emits from the tail pipe — how much fuel you burn is the calculator of your impact. On the other hand, an animal product sits innocently concealed in a plastic-wrapped package, with no way to tally its heavy environmental toll.

So how does an animal product come to have such a profound carbon footprint? It’s a combination of factors. Producing animal products wastes enormous amounts of energy and fossil fuels, and emits greenhouse gasses in the process. Throw in the destruction of the Amazon Rainforest for cattle grazing and raising soy beans fed to animals, and you have a recipe for serious impact on climate change.

When it comes to global warming, farmed animals and their byproducts, The United Nations Food and Agriculture Organization (FAO) estimates that livestock production is responsible for 14.5 percent of global greenhouse gas emissions, while other organizations like the Worldwatch Institute have estimated it could be as much as 51 percent.  Based on their research, the advisors from Worldwatch conclude that replacing animal products with plant-based foods would be the best strategy for reversing climate change. They advise that this can reduce emissions even more than the actions currently taken to replace fossil fuels with renewable energy (see Livestock and Climate Change, Robert Goodland and Jeff Anhang, World Watch Nov./Dec. 2009)

The United Nations Food and Agriculture Committee looked at the global impact of animal agriculture and found that farming animals emits more greenhouse gasses then all the world’s transportation— that’s all the automobiles, planes, trains and any other form of carbon-emitting transportation combined. So when you are contemplating how to significantly reduce your carbon footprint, often what comes to mind first is driving less or getting a more fuel-efficient vehicle, and while that certainly helps, your impact can be even more powerful by reducing or eliminating animal products from your diet.

A study by the University of Chicago found that consuming no animal products is 50 percent more effective at fighting global warming than switching from a standard car to a hybrid.

Most of the world’s water is used for irrigation. Agricultural production, including livestock production, consumes more fresh water than any other activity in the United States (See Sustainability of Meat-Based and Plant-Based Diets and the Environment, American Journal of Clinical Nutrition, Vol. 78, No. 3, 660S-663S). In fact, over half the total amount of fresh water consumed in the U.S. goes to irrigate land to grow feed for livestock. Huge additional amounts of water are used to water the animals, clean the equipment, etc. A dairy operation that utilizes an automatic “flushing” system can use up to 150 gallons of water per cow per day (US Department of Agriculture, Soil Conservation Service. “Agricultural Waste Management Field Handbook.” USDA. April 1992: p. 4-8).

It takes less water to produce one year’s worth of food for a completely plant-based diet than it does to produce one month’s worth of food for a diet with animal products. Producing 1 lb. of animal protein requires about 100 times more water than producing 1 lb. of grain protein (See Sustainability of Meat-Based and Plant-Based Diets and the Environment, American Journal of Clinical Nutrition, Vol. 78, No. 3, 660S-663S). It has even been said that a vegan can leave the shower running for a year and still not waste as much water as a meat eater in the same year.

Animal agriculture destroys thousands of acres of forests that help purify the air, reduce carbon dioxide, and that are home to many species of animals, birds, and plants. According to the UN, “In the Amazon, cattle ranching is now the primary reason for deforestation.”

Large-scale dietary change to a plant-based diet could actually reverse deforestation. In the US, over 400 million acres of pasture and range land could be reforested (See Livestock’s Long Shadow: Environmental Issues and Options Food and Agriculture Organization of the United Nations, Rome, 2006).

Hundreds of millions of additional acres goes to growing feed for livestock, most of which could be reforested if the land was used directly to feed people instead of animals. It is estimated that one acre of trees is preserved each year by each individual who switches to a completely plant-based diet.

So while celebrating this beautiful planet during Earth Day, remember that reducing or eliminating the consumption of animal products is one of the most powerful ways we can reduce our impact on the environment. A plant-based diet is by far the most ecological dietary choice we can make.