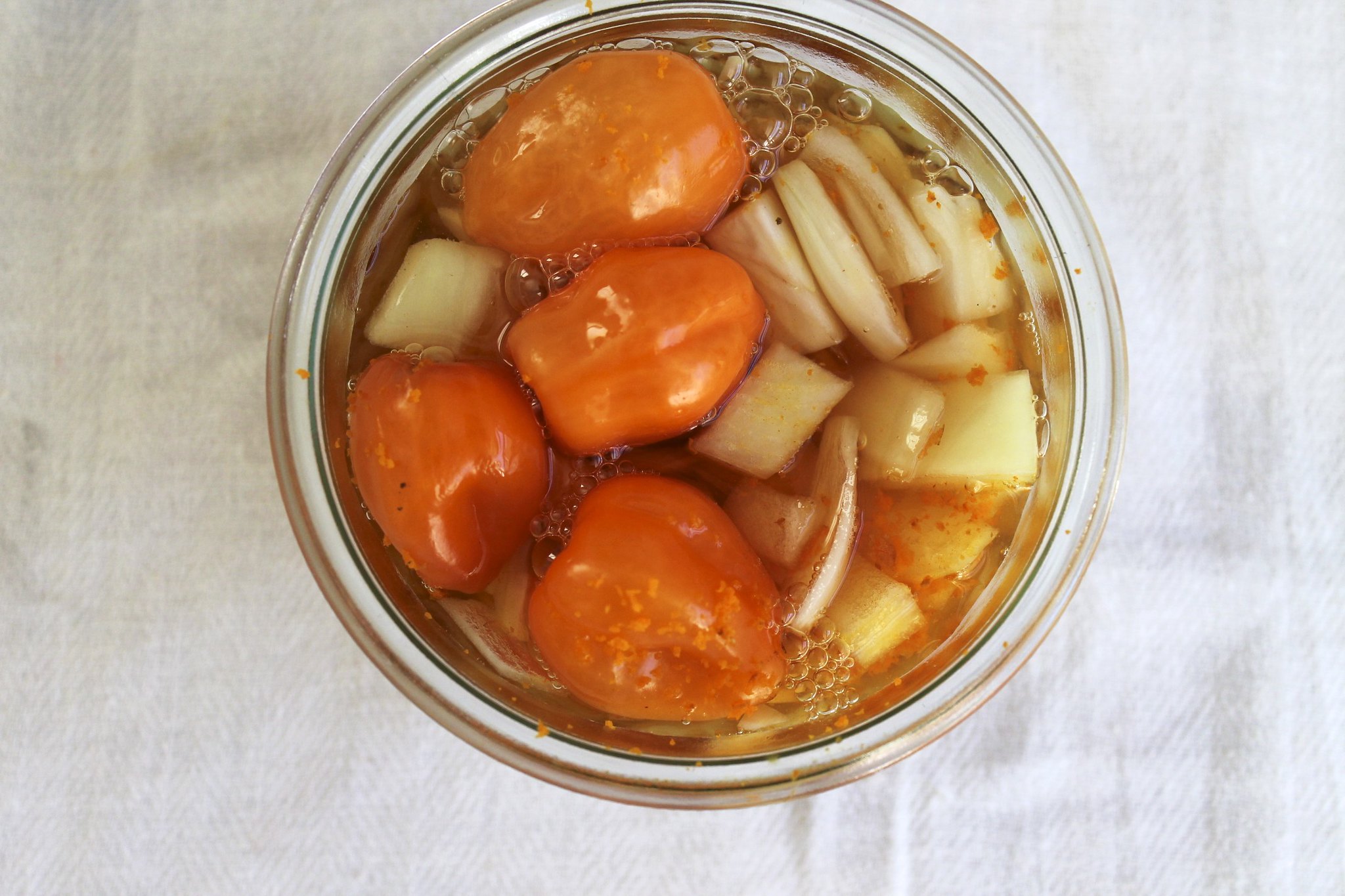 While the old adage may be that an apple a day keeps the doctor away, the reality is that a good shot of apple cider vinegar might get the job done all the better. A daily dose of apple cider vinegar is associated with a world of health benefits, everything from pH balancing to regulating blood pressure to digestive assistance. This can all be gotten by including a simple elixir of raw ACV (1-2 spoonfuls) and water (12-16 oz) every day.

But, why stop there when there is more to be gained? Fire cider (vinegar) adds a host of other medicinal herbs and spices to the mix, all the while making it a sight tastier. Infusions of herbalist mainstays like horseradish, ginger, and cayenne pepper put some flame to the flavor. In the chilly winter months, when healthy tonics are most needed, the fire can help with warming up internally as well.

So, here’s a little guide to take you from organic apples to full-blown fire cider.

While this step and the next can be skipped (just buy raw unfiltered apple cider vinegar), it can be a fun part of the process, and for those of us with access to cheap or free apples, DIY ACV can save us some cash.

With just water, apples, and sugar, as well as a healthy dollop of time, it’s possible to produce gallons of apple cider vinegar right at home. Cube up a load of apples, put them in a glass or ceramic container and add mixture of sugar-water, dissolving one cup of sugar for every gallon of water.

The mixture in this state will ferment for about week. It should be stirred once or twice a day. A couple of days into the process, bubbles will start to show up. That means it’s working.

After a week, that’s hard apple cider, the alcoholic drink.

Essentially, apple cider vinegar is just hard apple cider that has gone to vinegar, much like an open bottle of merlot make red wine vinegar. In this case, strain away the chunks of apples and let the somewhat cloudy liquid continue to mature. This can take a month or two but requires nothing more than storing it in the same glass/ceramic container in a cool, dark place.

If it begins to develop a disc-like blob about the surface, this is perfectly normal. That’s the famed “mother” so often advertised on store-bought containers of unpasteurized ACV. The bulk of the blob can be strained away at the end. Or, it can be used to speed up the process with the next batch of ACV on the go.

Now that we have made apple cider vinegar from scratch—That’s right! How badass are we!—we can get the homemade fire cider. The next step is to prep a bunch of health-boosting ingredients and put them in a Mason jar (or two, or three). Here are some fire cider staples, the stuff that brings the burn:

With the staples established, we have the opportunity to add more healthful components, as well as stuff to provide some flavor, maybe:

The amounts of these ingredients should be measured to taste. They’ll all aid in making the elixir something super special. After all the spices, herbs and fruits are tossed together ready to roll, they should be distributed equally amongst containers, filling them at least halfway. Pour in the vinegar to the top. Put on a lid, shake it up, stow it away to infuse for another month and strain the vinegar one more time, squeezing the pulp to get every last drop of goodness.

How to Take Fire Cider

The general idea is to have a spoonful of fire cider a day, the steady supply working on a preventative level versus curative. Fire cider is tasty enough to simply have a shot (spoonful) or make an elixir with a spoonful in water. Otherwise, the fire cider can be added to vegetable or tomato juice, maybe some celery sticks, olives, and pickled green beans for a Bloody Mary. Or, it can be combined with some extra virgin olive oil to make a tasty salad dressing. That’s food for medicine.