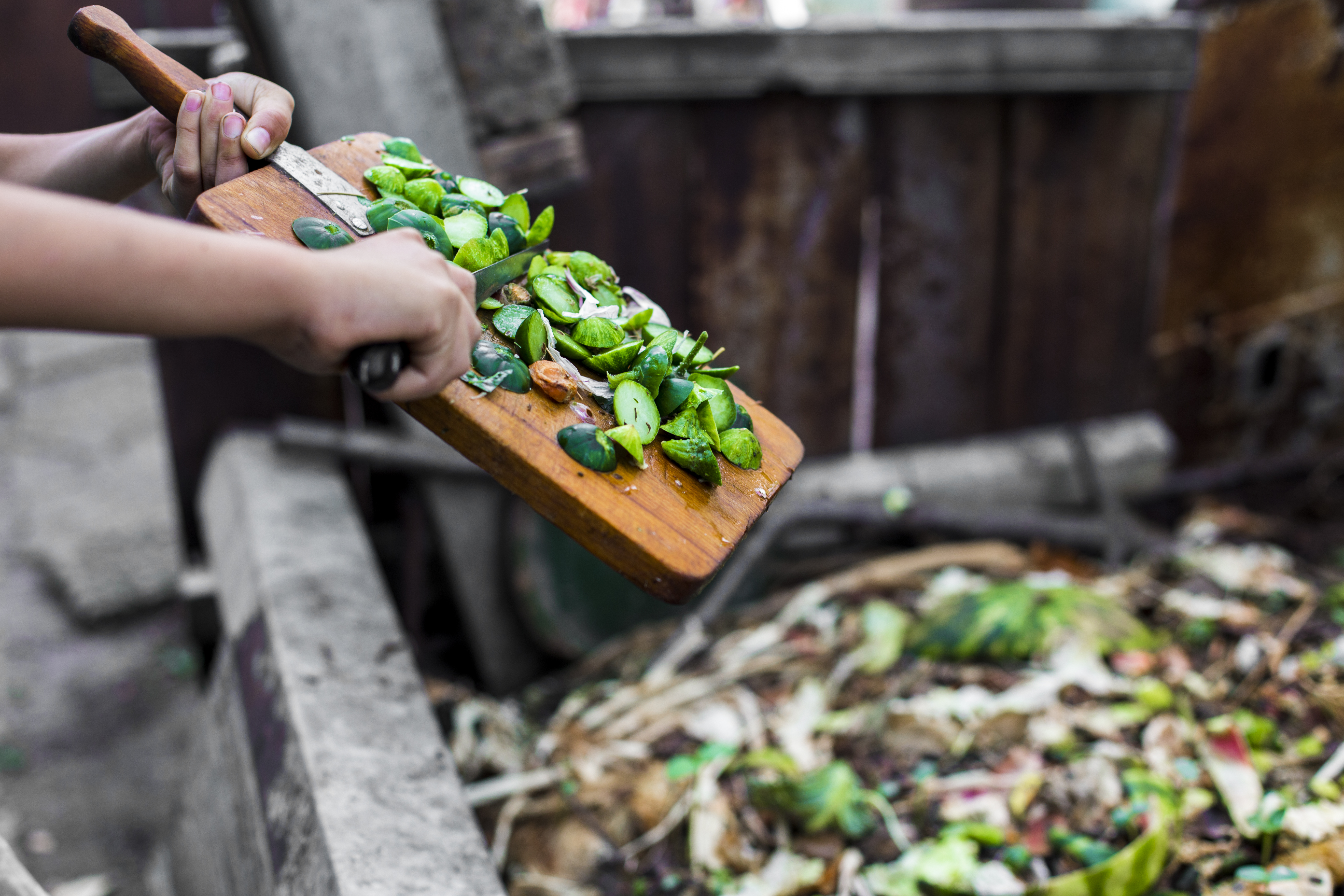 Composting is one the simplest, greenest ways we can change what we are doing for the betterment of the planet. It boils down to this: Rather than burdening our landfills with soon-to-be contaminated organic materials, we stack them at home to create rich, organic soil. That soil can be added to vegetable gardens, put beneath trees, sprinkled on the lawn or simply disposed of in forest. It’s natural and healthy. It’s what is supposed to happen to organic material.

Most of us want to do good things for the planet. It’s something we care about, but it can feel overwhelming. We buy the right lightbulbs. We do the reusable shopping bag thing. But, the thought of composting just feels a bit heavier. We have to sort out trash. Of course, we kind of already do that to recycle, so that isn’t so bad. But, where are we supposed put all these food scraps. Now, we’ve got to build a compost bin. We don’t garden, so what do we do with the compost?

Well, what if building that bin—the first step to a new green hobby—weren’t so tough? What if it required no construction chops at all? Would that help? 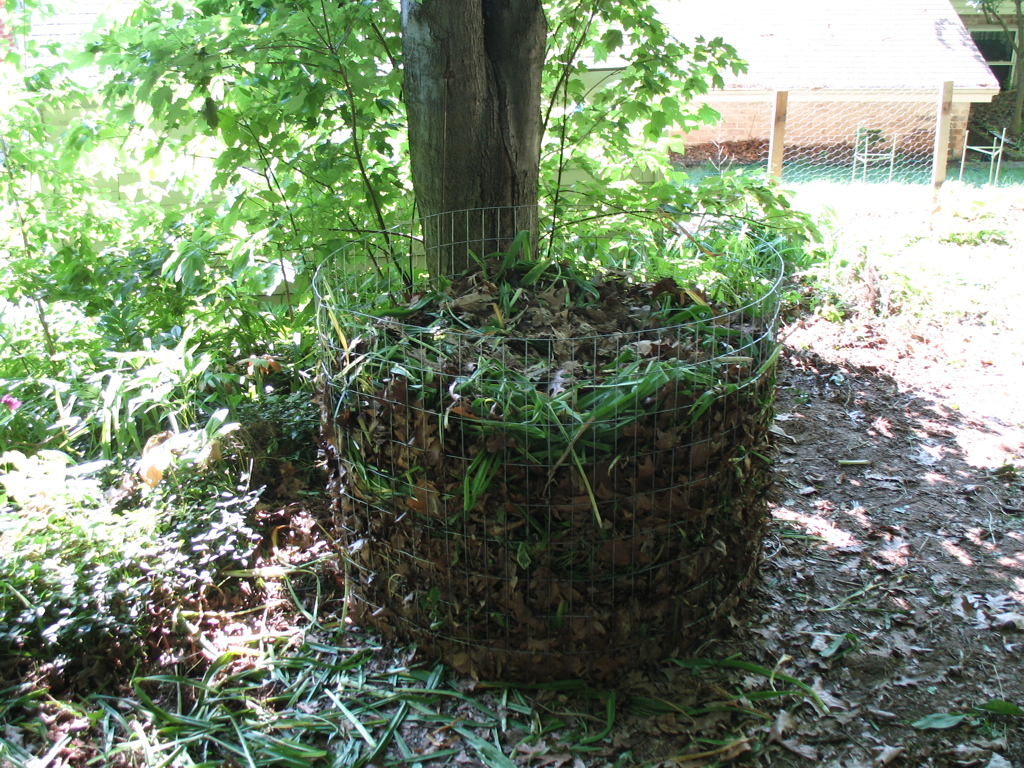 Wire cages are perhaps the simplest way to construct compost bins. Get about 10 feet of 3-foot tall fencing wire. Roll it into a tube and fasten the two ends together, either via bending the cut ends of the fencing or tie wire. Stand the tube vertically. That’s a decent compost bin. It’s roughly a cubic yard. For those worried about critters, the fencing wire could be replaced with something that has smaller openings, what is often called rat wire. When the compost bin is full, unfasten the ends and move either the compost or the compost bin to a new spot.

One of the easiest compost bins to build, particularly for those in rural areas or near forests, is the log cabin. We all know what a log cabin looks like: two logs going one way, two logs going another way, and vice versa until it stacks into four walls. Well, with compost bins, it’s even easier because the logs don’t need to create a solid wall. Just stack sticks that are roughly two inches—give or take an inch—in diameter and four feet long until they reach about three feet high. An ideal compost bin is at least a cubic yard, so this is perfect. This will take months to fill, and by the time it’s full, the sticks, which were free, will be fairly rotten as well. Let it all mellow until it’s soil. 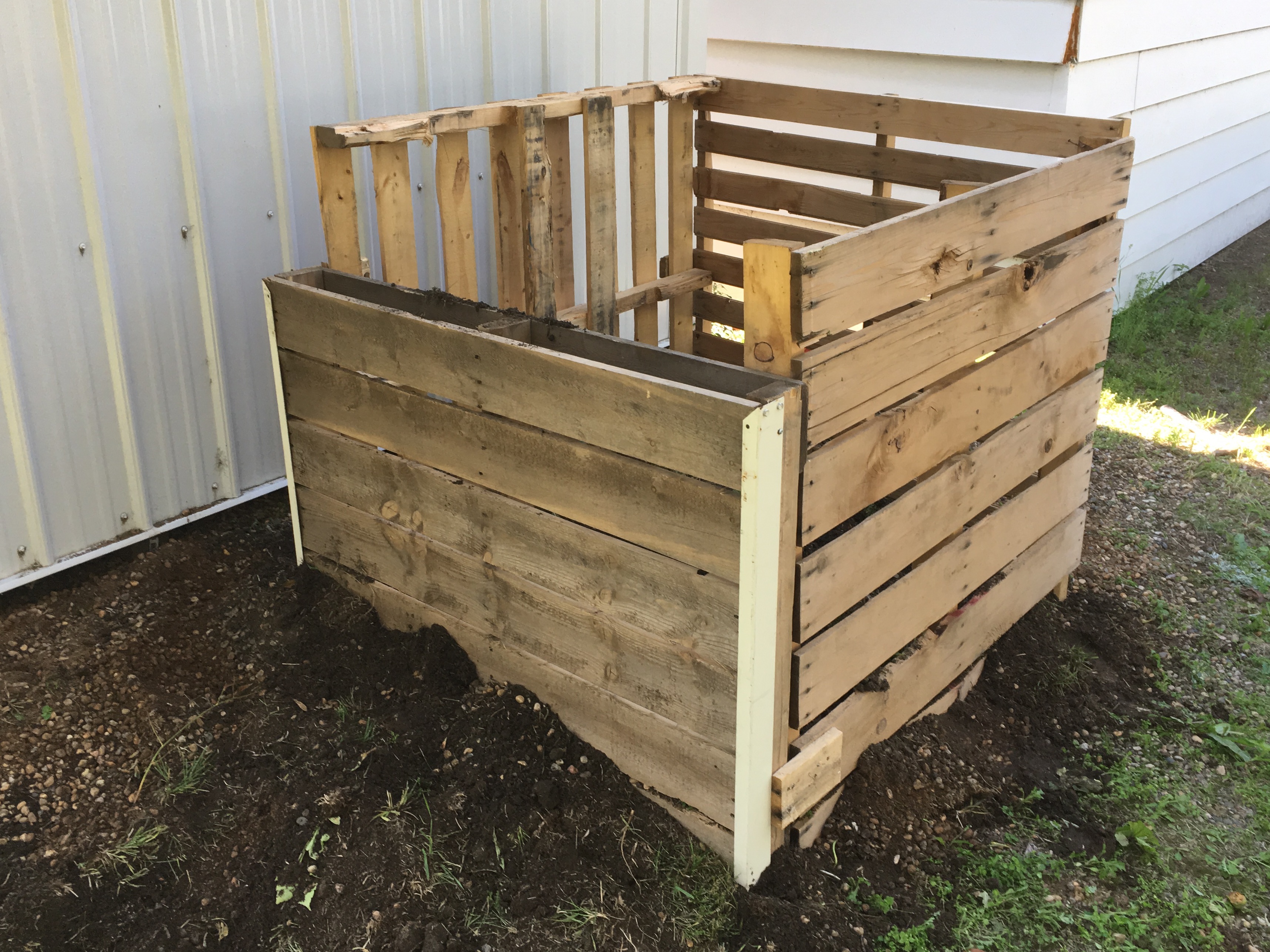 For those with access to pallets and looking for something a little more sculpted than a log cabin compost bin, pallets are an easy solution. With a handful of nails, five pallets and some string/twine/tie wire, a compost bin is but a half-hour away. Put one pallet flat on the ground and stand the other four into a cube around it. Hammer a nail halfway in to the bottom outside corners of each standing pallet and tie them together. Then, put nails in the top corner of each of the standing pallets and tie them together. Once the bin is full, months later, untie the sides, remove the compost (put it in a pile next to the bin if needs to decompose more) and begin the process again.

For those who are into straw bale gardening, this is a fantastic way to either prep the straw bales for planting or use old, intact straw bales after the season. Stack them on edge two or three high into a square shape. The compost goes in the middle, and it will help to breakdown the straw bales as it decomposes. Once full, unstack the bales, spread the bins contents—even if it isn’t quite finished—on the ground, cover it with some layers of wet newspaper or cardboard boxes, then mulch over it with the remaining straw. That’s a very fertile lasagna garden bed. Without ever having to turn the compost or till the ground!

The long and short of compost bins is that they needn’t be something costly or time-consuming to build. That don’t need to be another product we buy. They are there to hold organic waste while it rots. Keeping that in perspective and the world we be a happier, healthier, greener place for it.