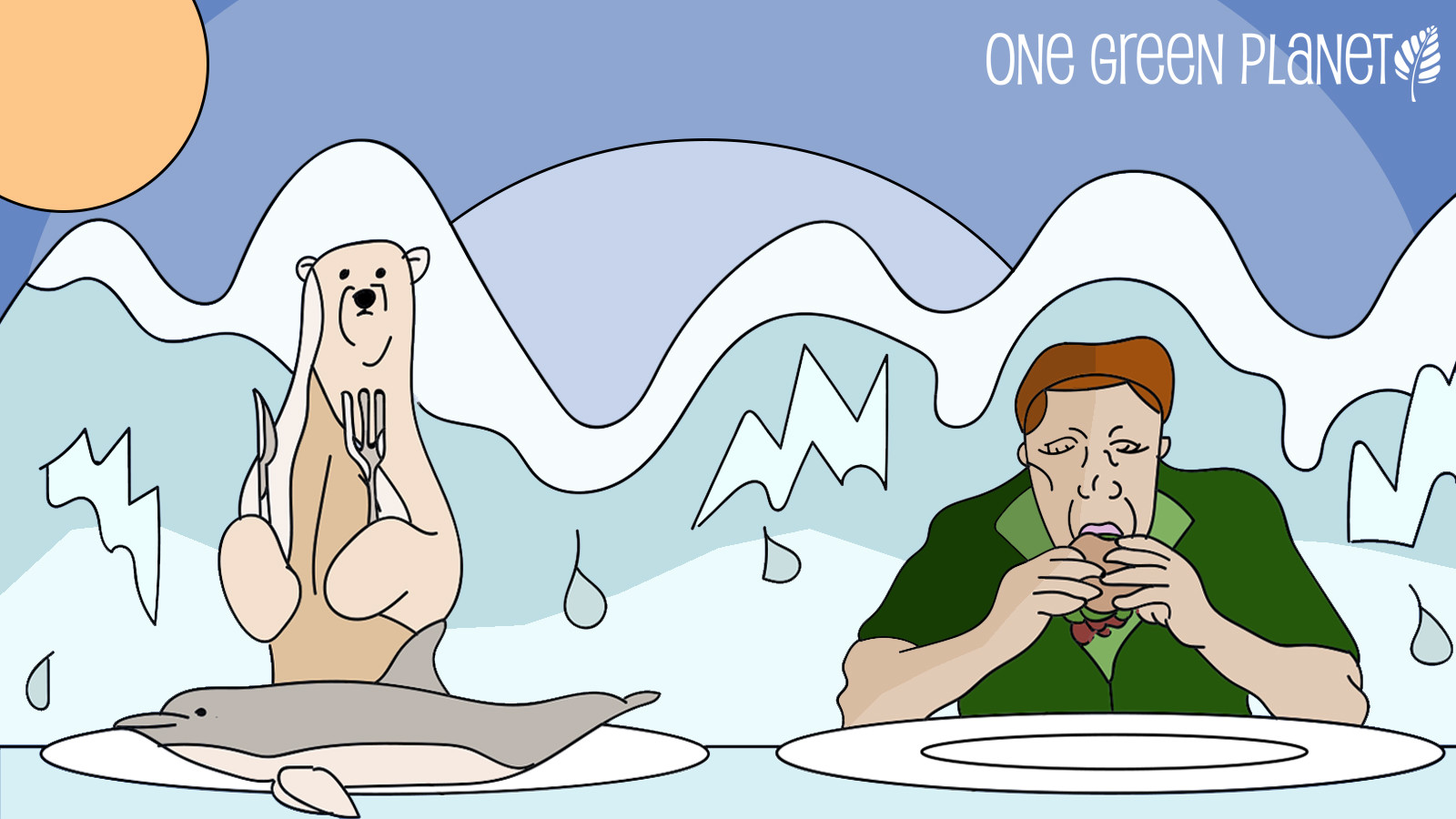 Polar bears have become the canary in the coal mine for the emerging problem of climate change. And while a changing climate threatens a variety of plant and animal species worldwide, it is the iconic face of the polar bear that has come to symbolize the plight of nature in the face of a damaged environment. An estimated 8.6 million acres of the polar bear’s native habitat disappear a year due to the rapidly warming temperature of the planet.

While there are many different factors at play at the loss of this ancient ice, greenhouse gas emissions associated with animal agriculture have been showed to play a major role in the loss of the polar bear’s home which is putting this species in dire straits. Polar bears rely on the ice to live and hunt for food, as we quickly melt away this habitat due to our greenhouse gas heavy diets, bears are being forced to sustain themselves in rather unusual ways.

Scientists have recently documented some shocking behavior exhibited by polar bears in Norway over the last year; several polar bears were seen consuming dolphins, an animal not typical in the bears’ diet. In total, scientists spotted six different polar bears feeding on the carcasses of white-beaked dolphins, and it appeared that the polar bears caught their prey when the dolphins surfaced in a hole in the ice pack and were then hauled out of the water by a hungry bear, just as they do with seals.

In addition to these new discoveries of a prey source for polar bears, scientists also noted a behavior that is not necessarily unheard of, but is still rare. Some of the polar bears had packed leftovers from their meals into the ice in an apparent effort to save it for later. Possibly a sign of concerns over food shortages for the bears?

What Do Dolphin Dinners Have to Do with Climate Change? 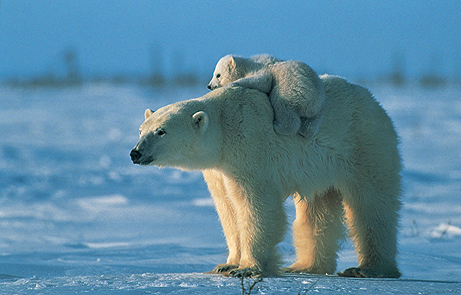 Polar bears typically hunt and feed on seals, gaining a massive payout in the calories that seal fat provides. They are also known to scavenge carcasses of whales and walruses they may find. However, this new observed phenomenon of polar bears actively hunting dolphins is very concerning.

The white-beaked dolphins were only available as prey due to ecosystem changes on by warming ocean temperatures. Usually, the icy Norwegian waters would be too cold for these cetaceans until the late summer months,  but scientists speculate that a lack of sea ice in the region caused them to journey northward earlier. A lack of sea ice also makes for choppy seas and stronger currents which likely pushed the dolphins into the hungry paws of skinny polar bears. 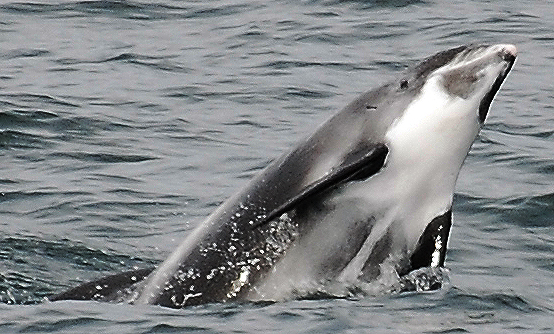 There are two points about this study that raise some major red flags: 1. Man-made greenhouse gases are warming ocean temperatures which is causing animals like dolphins to migrate farther north and 2. Polar bears are having to expand their diets to consider a variety of prey options is another. With less ice packs available for polar bears to hunt from, their chances of finding a seal den or a hole in the sea ice to catch a seal decreases – and then polar bears are forced to use what ice is left to hunt for anything, dolphins included, or swim longer distances in search of food and den locations elsewhere which can be extremely dangerous.

On one hand, we can praise the polar bear for its adaptability in a tough situation, but we must also recognize the detrimental impact that climate change is having on these animals, and the manner in which they are being backed into a corner to survive.

Climate change has and will continue to have detrimental impacts on ecosystems around the world, harming wildlife and plants alike. Migrations of animals such as birds and butterflies are changing in response to warming temperatures. Biodiversity is threatened by climate change as species are forced to face temperatures they cannot adapt to. Increasing temperatures may also cause some parasites to migrate to cooler locales, and possibly even increase in numbers making them a larger threat to their hosts. And extinction is predicted to threaten up to a quarter of the earth’s species as a result of climate change by 2050. This is certainly spelling bad news for the plants and animals we are surround by, and it’s all because the ecosystems they inhabit are under threat.

NASA has made some startling claims about the impact of climate change on ecosystems around the world. By 2100, the organization claims that roughly 40 percent of land-based ecosystems will shift in type due to climate change. That is, a forest may become a grassland and a grassland a desert. Not only is this a problem for the billions of people around the world trying to sustain life in their communities, it is also a major threat to the world’s plant and animal species that rely on healthy and unaltered ecosystems to support them. We already can see how arctic ice is melting and polar bears are losing their own ecosystems. Imagine what is happening to countless other animals around the world also wrestling with climate change.

Now, you’re probably wondering what you can do to help polar bears and others animals being impacted by climate change. Unfortunately, this is a massive issue that governments, scientists, and environmental groups are struggling to get a handle on. However, you need not wait for any of these bodies to act before you can start impacting the environment in a positive way.

Little changes in your everyday life will make a world of difference for polar bears and other wildlife negatively impacted by climate change.

Leaving meat and other animal products off your plate is the single most effective thing you can do as an individual to help polar bears and other animals under threat by climate change. Ditch the dairy and pass on the pork, replacing them with sustainably grown vegetable-based foods. Not only is this a delicious and healthy choice for you, it is also incredibly effective at reducing your carbon footprint. Going from a meat-heavy diet to a vegan lifestyle can reduce your carbon emissions from food alone by over half! Check out these life saving tips for transitioning to a plant-based diet, and of course, this amazing database of over 5,000 kickass recipes for your daily installment of eco-friendly meals and snacks. While you’re at it, join in our #EatForThePlanet campaign to learn more about the amazing power of your food choices.

Addressing the issues that are threatening polar bears and all wildlife may be a daunting and discouraging task, but when you get three chances a day to make a positive impact, suddenly this fight becomes much more manageable (and delicious!).