Could Your Hamburger be Killing Polar Bears? 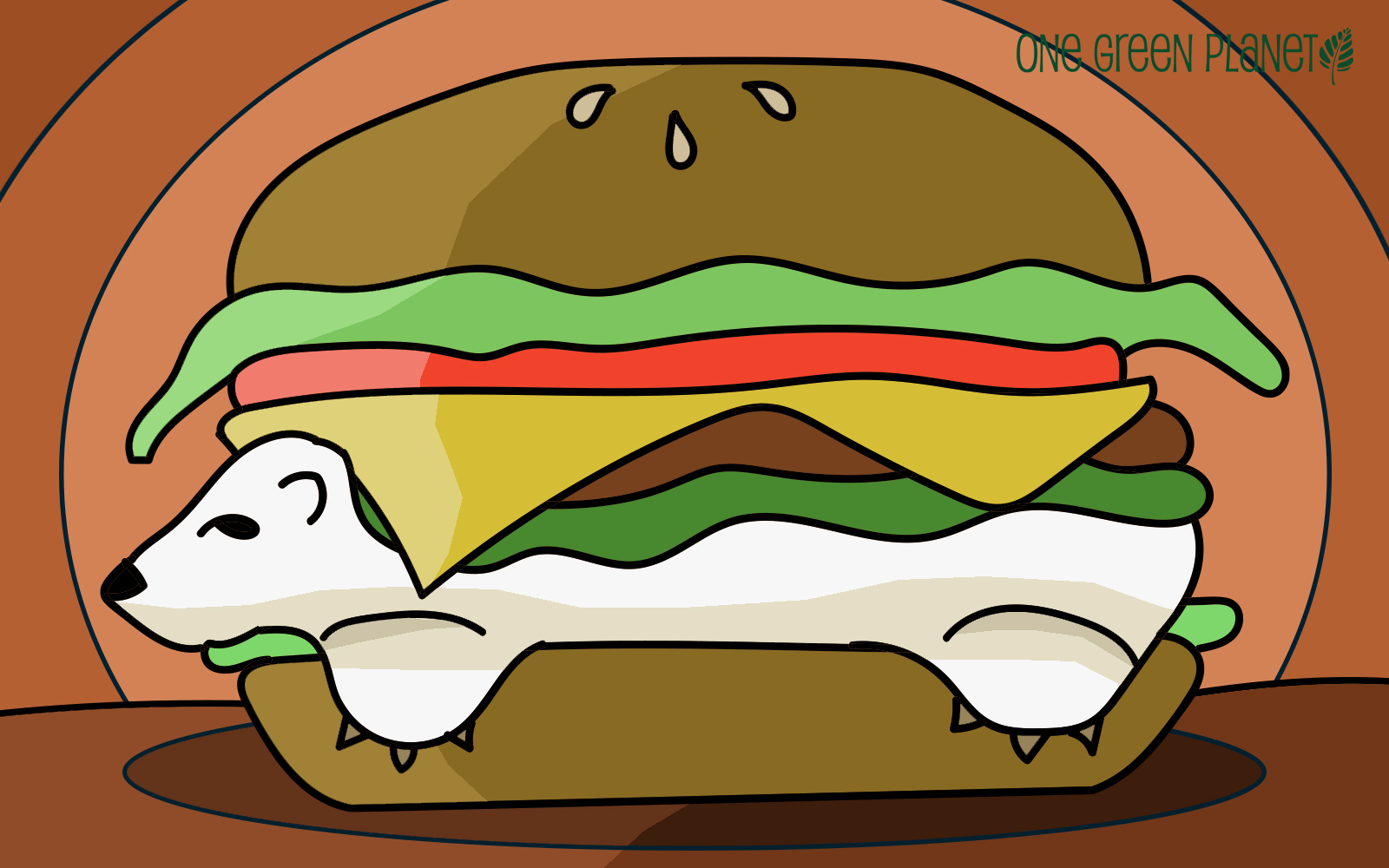 The image of a polar bear floating on a single sheet of ice has become synonymous with the discussion of climate change. As the polar bear’s habitat literally melts before our eyes, we are starting to recognize the direct impact that man-made greenhouse gas emissions are having on the other species we share the world with. The polar bear’s Arctic habitat is quickly diminishing, in fact, an estimated 8.6 million acres of ice disappear a year and this rate is only expected to increase along with the temperature of the planet.

With this in mind, many conservationists have begun to promote the need to cut greenhouse gas emissions to save the polar bear. Not driving your car and reducing your electricity use have been posited as two of the main ways that people can go about slashing their carbon footprints. While these are great things to do to limit your impact on the planet, but there is one other, incredibly simple, that can have an even more significant positive effect that many people don’t talk about … your diet.

More than any other industry, animal agriculture is responsible for an enormous amount of deforestation and greenhouse gas emissions, but many overlook the connection between the meat on their plate and the polar bear floating out in the Arctic.

There are currently around seven billion people on the planet and this number is only set to rise exponentially in coming years. Feeding this many people is a serious concern, especially considering that animal agriculture – which is becoming increasingly popular amongst the world’s populations – requires an enormous amount of land and water resources. Around 33 percent of Earth’s arable land is dedicated to growing feed for livestock alone and as the demand for meat grows, more land will have to be dedicated to this purpose. Sadly, the Earth’s arable land mass isn’t growing, so deforestation to make way for feed crops is increasing.

According to Rainforest Trust, “Rainforest deforestation is a driving force behind the increase in greenhouse gases warming the Arctic. Destruction of tropical forests accounts for at least 25 percent of human-caused carbon emissions; an amount greater than all emissions from trucks, cars, trains and planes combined.”

Considering the fact that an area of South American rainforest the size of the combined stretch of Germany, Belgium, the Netherlands, and France has been deforested to grow soy (of which, around 85 percent is fed to livestock), the impact of our meat’s food is incredibly significant on its own.

Deforestation might be where the emissions associated with livestock production begins, but it is hardly where they end.

The billions of livestock in the animal agriculture system are responsible for around 37 percent of the world’s methane gas emissions. These emissions come from animals “belching” as well as from their waste. Animals in the agriculture system produce around 131 times the amount of waste than the entire human population combined. Due to the high-volume of this waste, factory farms have little choice but to store it in giant open-air cesspools that release tons of carbon dioxide, methane, and other greenhouse gases into the atmosphere.

Adding insult to injury, when you total the amount of fossil fuels used in the process of running factory farms, slaughtering animals, and transportation, a single calorie of animal protein requires at least nine calories of fossil fuels.

Taking everything from greenhouse gas emissions associated with deforestation and those involved in the production of animals themselves, the The United Nations Food and Agriculture Organization (FAO) estimates that livestock production is responsible for 14.5 percent of global greenhouse gas emissions – but other organizations like the Worldwatch Institute have estimated it could be as much as 51 percent.

The bottom line, animal agriculture is a major player in the creation of greenhouse gas emissions and therefore a huge contributor to global climate change.

How Does This Affect Polar Bears?

Polar bears live on the sea ice and rely on this structure for everything from hunting and eating to breeding and creating homes. As the polar bear’s habitat shrinks, due to rising global temperatures, they are struggling to access food. According to National Wildlife Federation, “Exacerbating the problems of the loss of hunting areas, it is expected that the shrinking polar ice cap will also cause a decline in polar bears’ prey — seals. The reduction in ice platforms near productive areas for the fish that the seals eat affects their nutritional status and reproduction rates.”

In the absence of seal populations, polar bears are turning to eating dolphins, sea birds, and tragically, even each other.

Many polar bears will also drown as a result of the melting ice. Scientists have observed that when sea ice retreats, it creates larger gaps between ice formations which in turn leads to rougher wave conditions in the water. Between having to swim longer distances and rougher conditions, incidents of polar bear drowning are rising.

If the Arctic continues to warm as fast as it is, scientists predict two-thirds of the world’s polar bears could be wiped off the planet within this century. Some scientists have even said that climate change could drive this species to extinction by 2020.

Seeing the connection between animal agriculture and greenhouse gas emissions is the first step to realizing how our diets affect animals like the polar bear. Tragically, there are many other animals who are suffering as a result of our consumption habits, but the good new is that we can all help to ease their struggle by altering our food choices. While driving your car less and conserving energy are important, did you know that by leaving meat off your plate you can halve your carbon footprint? Pretty powerful stuff!

We can all make a difference right now, by choosing plant-based foods when we eat.