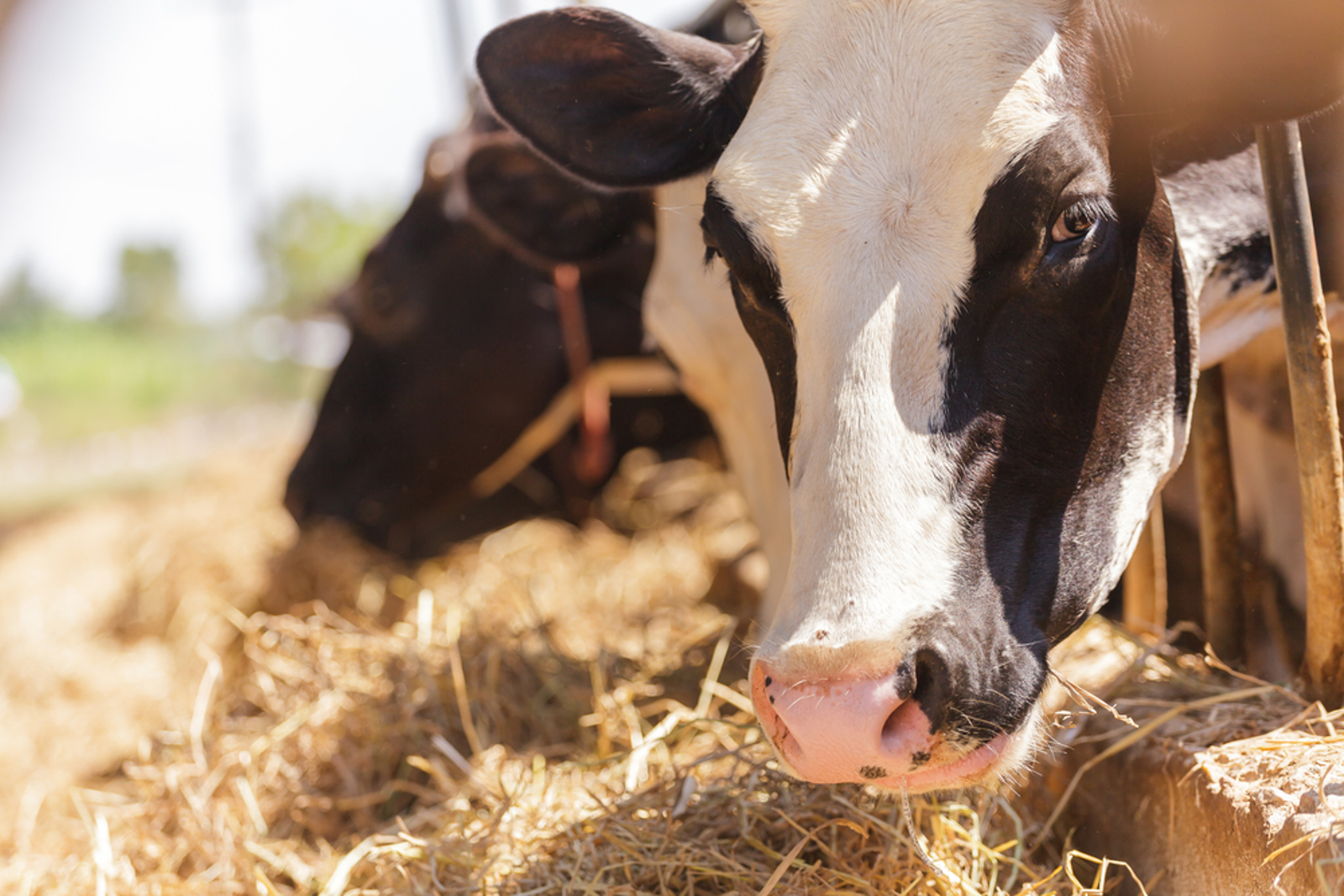 Nearly all farm animals — 99 percent — are raised on one of the 20,000 factory farms located in the United States. That includes an estimated 29 million cows that go through the factory farm system every single year. These “factory farms” or “CAFO”s (Concentrated Animal Feeding Operations) are minimally regulated due to ag-gag laws, which has led to a whole host of health and environmental problems. Sadly, this contamination of our air is destroying our planet and making us sick.

Animal farms may produce food, but they also produce massive amounts of animal waste like urine and manure that emit around 400 different harmful gases into the atmosphere. Some of these gases include nitrous oxide, ammonia, particulate matter, endotoxins, and hydrogen sulfide. Because thousands of animals are kept together in factory farms, the concentration of the gases produced can be extremely dangerous to the local community. For example, roughly 80 percent of ammonia emissions in the U.S. comes from animal waste.

Additionally, when factory farm waste decomposes, it releases airborne particulate matter along with harmful gases. These particulates can include dry manure, feathers, bits of feed, and animal dander. They can travel through the air for miles and turn the sky hazy near the factory farm. The antibiotics that livestock are given to protect them while living in a high-stress, filthy environment are also potent airborne matter.

In one experiment, researchers from Texas Tech placed air samplers 10 to 30 yards both upwind and downwind from beef and dairy feedlots throughout the fall and winter months. A stunning 100 percent of the samples tested positive for Monenisin, an antibiotic that is commonly used in human medicine. While this antibiotic is not thought to contribute to a surge of antibiotic-resistant bacteria; tetracycline antibiotics, which do contribute to bacteria resistance, were found in 60 percent of the downwind samples and 30 percent of the upwind. Tetracycline antibiotics are used to treat pink eye and urinary tract infections, both of which are becoming more difficult to treat as bacteria develop resistance.

The United Nations Food and Agriculture Organization (FAO) estimates that livestock production is responsible for 14.5 percent of global greenhouse gas emissions, while other organizations like the Worldwatch Institute have estimated it could be as much as 51 percent. Even in the more modest estimate, this is more than all the cars, trucks, planes, and ships in the world!

In fact, methane gas is one of the largest contributors to global warming and can trap up to 100 times more heat in the atmosphere than carbon dioxide over a five-year period. Most of the methane comes from cows on factory farms that are fed low-quality grains that their bodies were not made to digest, resulting in high levels of indigestion and flatulence. All of this gas then enters our atmosphere.

In addition, meat and other animal products have a huge carbon footprint due to the deforestation needed to grow feed, and graze animals, as well as all the transportation involved in both feeding the animals and distributing the products to consumers. That ends up being a lot of travel and tons of carbon output.

Living near an animal farm can be quite uncomfortable. Livestock in the U.S. produces 500 million tons of excrement every year. This is way more waste than factory farms could ever redistribute as fertilizer, so the majority of waste is left to fester in massive, open-air waste lagoons. When these cesspools get full, factory farms will frequently get around water pollution limits by spraying liquid manure into the air, creating mists of pollutants carried away by the wind.

Having to live with the awful smell and harmful gases released by farm waste can ruin people’s health and quality of life. The CDC has even reported that mental health deterioration and increased sensitization to smells can occur in people who live near factory farms. Sadly, many communities located near factory farms fall below the poverty level so they do not have the option to relocate to a place with cleaner air.

Another problem with the animal waste collecting in the massive lagoons is that the waste breaks down and forms ammonia gas. This then breeds bacteria, which combine with other pollutants in the air to form nitric acid. The nitric acid builds up in the atmosphere and then returns to the surface of the earth as acid rain, harming soil, forest habitats, and water ecosystems.

Given all of this air pollution, it is not surprising that animal farming causes several serious health problems for farmworkers and local residents. People tend to suffer from respiratory irritation, bronchitis, lung inflammation, dust toxic syndrome, asthma, and possibly cardiac arrest. Ammonia emissions can cause a variety of harmful health effects like dizziness, eye irritation, respiratory illness, and nausea. Releases of dangerous levels of hydrogen sulfide can cause sore throats, seizures, comas, and even death.

Asthma can be a real concern, especially for children living near these farms. According to the Centers for Disease Control (CDC), children raised in communities near factory farms are more likely to develop asthma or bronchitis.

Finally, the unsanitary conditions on factory farms, poor quality of animal feed, and overuse of antibiotics in livestock have resulted in diseases that are not always easy to manage. Swine Flu and Avian Flu, for example, can be distributed through the air, causing local residents to get sick.

They say once you know the truth, it’s your job to spread it. So in this case, it is up to you to share this article and educate others about the dangers of animal agriculture air pollution – and to look to solutions. The best way to lower the amount of air pollution caused by animal agriculture is to go to the source. If we all take action to lower our consumption of meat and dairy, we can help lessen the demand for these products and slowly stymie the industry.  By simply choosing more plant-based foods, you can effectively halve your personal carbon footprint and help mitigate some of the other negative impacts imbued by animal agriculture.

To learn more about how you can make a difference with your food choices, join One Green Planet’s #EatForThePlanet movement.