The debate over genetically modified (GM) foods has been a hot topic the last few years. From the uproar over the recent approval of GM salmon for human consumption to the ongoing concern over lack of labelling of GM foods for consumer education, the public has voiced its distrust in companies that are changing nature before our eyes.

Contrary to American distrust and skepticism for GM foods is the continued embrace of animal agriculture in America. While American meat consumption has declined slightly over the last few years, the country is still second in meat consumption per capita in the world, just behind Australia. There is a degree of irony, however, in Americans’ strong support of animal protein alongside its lack of support for genetically modified organisms (GMOs) –  in reality, you can’t actually support one industry without supporting the other. In fact, without GMOs, the animal agriculture industry might not even be able to meet the demand that American stomachs currently place on it.

The Business of Beef (And Other Meat)

The American diet, which averages 270.7 pounds of meat per year per person, demands that the U.S. produces a lot of meat. According to the North American Meat Institute, in 2013, the United States alone processed 8.6 billion chickens, 33.2 million cattle, 112 million hogs, 239.4 million turkeys, and 2.3 million lambs and sheep. Unfortunately, the life and death of these billions of animals did not take place on a sunny farm surrounded by lush green grass and a bubbling brook. Instead, the reality is that the majority of these creatures face cramped and atrocious “living” conditions over the course of the months or years they inhabit planet earth. 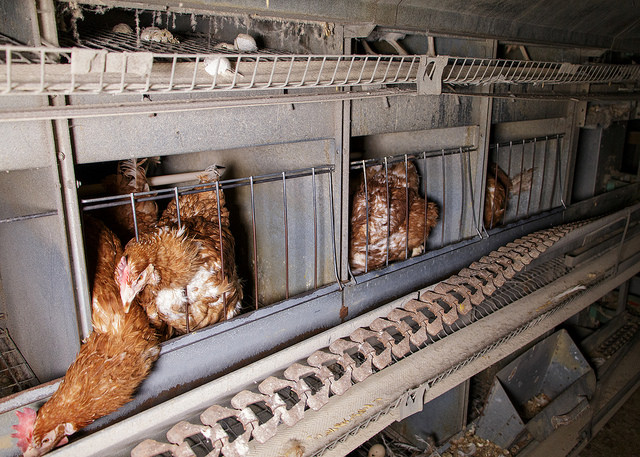 Concentrated Animal Feeding Operations (CAFOs), or factory farms, are often used to maintain a large collection of animals (like cows or chickens) in an enclosed building rather than open space. The animals are given feed instead of being allowed to graze and are often denied basic elements of life such as fresh air and sunshine. This is sadly the fate for over 99 percent of animals raised in the United States for food.

Your Food’s Food is Probably a Freak of Nature

To keep production up and turn out the billions of animals they do every year to fill American dinner plates, CAFOs demand an enormous amount of feed at an affordable price. So far, GMOs, and corn and soy crops, specifically, have been the most fitting choice for such an operation.

It is estimated that 88 percent of corn crops grown on U.S. soil are of the genetically modified variety, and about 36 percent of that goes to animal feed. That means over a third of the land and resources we dedicate to growing corn crops is actually eaten up by animals instead of people. Corn encompasses the majority of crops given to livestock, making up roughly 95 percent of feed mixes. If you consider the fact that the majority of animals raised in the U.S. are raised in CAFOs, and the majority of their feed on these CAFOs is composed of GM corn, you’ll be able to see the stronghold that GM corn has in the animal agricultural industry. 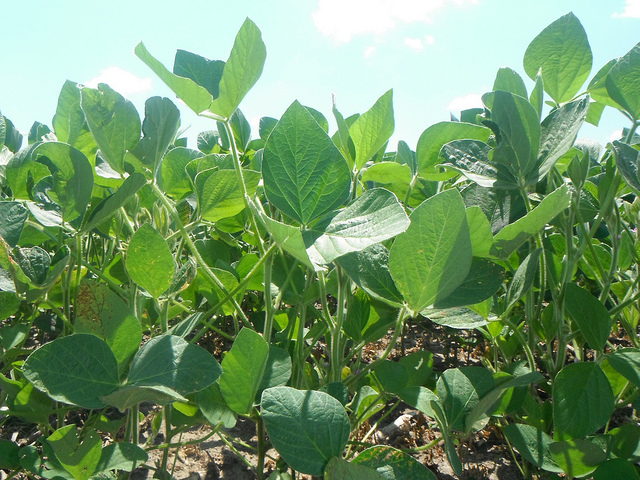 Once you consider how GM crops like corn and soy are married to animal agriculture in the United States, it’s hard to imagine the two without each other. Unfortunately, their well-established relationship is the source of all too much harm to our environment.

The waste stemming from animal agricultural operations is an obvious problem for the environment. From mutant bacteria to nutrient runoff, to greenhouse gas emissions, we can’t ignore the damage that billions of animals will do when crowded into a small patch of land. Expecting the environment to process the waste that hundreds or thousands of animals produce under one roof is simply too much to bear.

In addition, to the damage that agricultural animals themselves do to the environment, the crops that feed them are also a concern. A growing use of pesticides has been noted alongside GM crops, troubling neighboring waterways and endangering neighboring wildlife. There’s also the threat of genetic pollution as pollen drifts away from crops on the wind, meddling with plants growing in nearby farms and fields. And the use of monoculture and pesticides often associated with GM crops presents a challenge to biodiversity in and around the farm.

Our environment certainly faces too many issues to count. Threats seem to loom around every corner, but luckily, we do have some say as individuals in regards to how the planet is treated. We can make choices on a daily basis that remove support for destructive business models, instead choosing to embrace those that are more environmentally and sustainably minded.

The good news is that you don’t have to adhere to this industry. By saying “no thanks” to the steak that was a cow that ate GM corn and soy, and reducing your consumption (or eliminating entirely), you’re also saying “no thanks” to a host of issues this business model creates for the environment. Less water pollution, less air pollution, and fewer greenhouse gases in place of more biodiversity, more sustainable agriculture, and more guarantee of a healthier planet in the future is the result.

As the leading organization at the forefront of the conscious consumerism movement, it is One Green Planet’s view that our food choices have the power to heal our broken food system and pave the way for a truly sustainable future. By choosing to eat more plant-based foods, you can drastically cut your carbon footprint, save precious water supplies and help ensure that vital crop resources are fed to people, rather than livestock. With the wealth of available plant-based options available, it has never been easier to eat with the planet in mind.