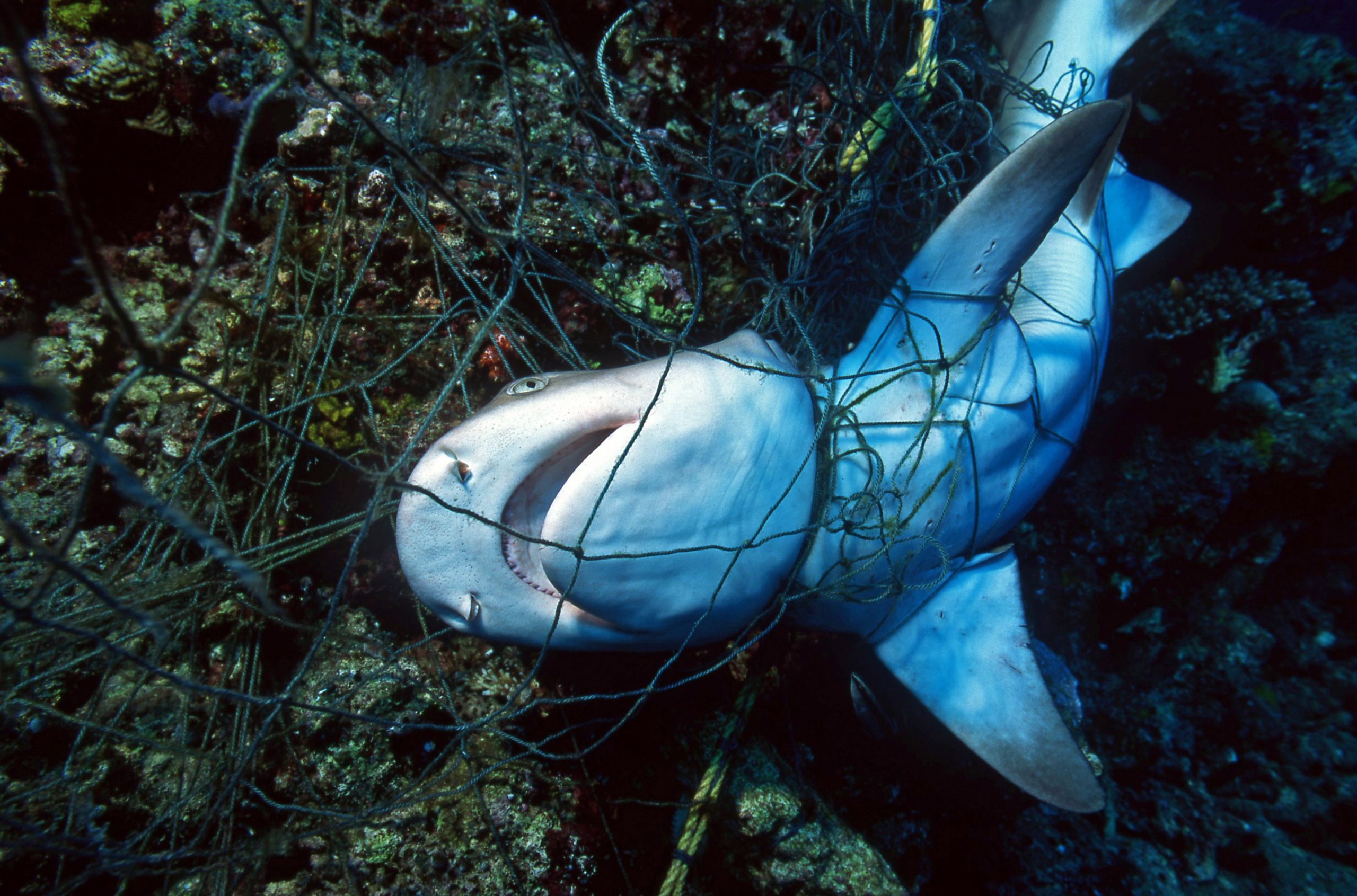 When people bring up ocean pollution and marine animal entanglement, they often think of plastic: straws, bags, containers, and so on. While single-use plastic pollution is a huge problem and does negatively impact marine animals as well as the underwater ecosystem, abandoned fishing gear makes up the majority of the ocean’s large plastic pollution, according to a report by Greenpeace.

The fishing industry is responsible for many more deaths than the animals it catches for food. Overfishing is disrupting the food chain and leading many marine animals on the road to extinction. According to one study, “if fishing rates continue at this pace, all the world’s fisheries will have collapsed by the year 2048.” The fishing industry is also responsible for destroying coral reefs and unsustainable aquaculture.

Two of the biggest issues with the fishing industry is bycatch and ghost nets. When fishing trawlers pull in their huge nets, there are so many more animals than just the intended fish that end up in their nets. Dolphins, sharks, whales, and other marine animals get caught in these nets and are often killed in the process. Additionally, More than 640,000 tons of commercial fishing equipment is discarded in the sea every year. Animals get caught in these nets, which prohibits them from swimming, eating, and ultimately, surviving.

We, as a society, need to start respecting and caring for marine animals. They are sentient, emotional, and intelligent beings that need more protection if we are to keep them from going extinct. To understand the horrors that the fishing industry is responsible for, here are 10 devastating videos of sea animals caught in fishing equipment.

When Christine Figgener and her team were out in their research boat, they came across an olive ridley sea turtle who was tangled in a ghost net. She was exhausted from dragging the tangled mess of fishing equipment around with her, so the team pulled her onto the boat and got to work cutting off the equipment. The ropes had cut deep into her neck, so they disinfected the wound with iodine and then released her back into the ocean.

When this huge Manta-Ray washed ashore, tangled in a fishing net, everyone started to take pictures of the helpless animal. While the fascination with such a magnificent creature is understandable, the poor Ray needed immediate help. Wildlife selfies have contributed to the suffering of so many animals and this could have been a scenario that was no different if one man had not decided to take charge. He worked on freeing the stranded animal from the fishing materials and called people over to help. Under his command, they all worked together and were able to get this amazing Manta Ray back into the ocean, finally free.

While on Operation Milagro V in the Upper Gulf Of California, the Sea Shepherd team found an old discarded net and brought it up quickly to save as many animals as possible. Unfortunately, despite the large number of animals tangled in the net, very few were still alive. They freed the animals that they could and tossed them back out to sea, but a large majority of the animals were already dead. Of the trapped animals, the team found fifty-seven dead sharks. When sharks stop swimming, they die, which makes them incredibly difficult to rescue once they get trapped in a ghost net.

When this diver was swimming with Manta Rays in Hawaii, a dolphin swam up to him to ask for help. The dolphin had a hook in its flipper with the fishing line wrapped around it. The man removed the hook and cut the line so that the dolphin could swim away, free from the uncomfortable fishing material. While this dolphin was lucky enough to find someone to help it, there are so many dolphins who are not so lucky and suffer injuries or get caught on other things, making it difficult to swim, find food, and thus, survive.

In February of 2019, Sea Shepherd was patrolling fishing areas in the Bay of Biscay. They found two French trawlers that used a trawling method, infamous for its destruction of sea bass and dolphin swimming areas. In the video, you can see the trawlers pulling up one of these nets with not only a large number of fishes, but also a dolphin trapped inside. While following the trawlers around for two hours, waiting for them to release the dolphin, Sea Shepherd came across a smaller dolphin with marks from fishing hooks and nets floating on the surface. Sadly, the deaths of dolphins at the hands of the fishing industry are incredibly common. As Sea Shepherd imparts in this video, more than 600 dolphins killed by fishing nets washed up in France over a period of 6 weeks and thousands of dolphins are killed as bycatch every year.

When the team from Ocean Conservation Namibia came across a group of cape fur seals, they saw a young seal pup, dragging a fishing line behind him. They were able to catch the pup and found that not only was a commercial fishing line wrapped around his neck, but it was also so tightly wound around his flipper, that it had sliced through almost half of it. The team cut the fishing gear off the seal, allowing him to finally start healing from the immense amount of pain that the gear likely caused him. If the team had not saved this poor seal pup, it might have lost its flipper or choked to death form the fishing line.

In June off the coast of the Aeolian Island in Italy, the Lipari coast guard helped free a sperm whale that was trapped in a fishing net. Its flipper was completely tangled in the net, which definitely was uncomfortable and made swimming difficult. The whale was visibly distressed, but after an hour, divers were able to remove the net and the coast guard made sure that whale was okay. It swam away and joined three others, free from the uncomfortable net that it had been stuck in.

Two brothers were out sailing near Mexico when they noticed four sea turtles that were tangled in a large wad of fishing gear. At first, they assumed that the turtles were dead, but after going out on an inflatable boat to retrieve the waste, one brother realized that the turtles were still alive. He started cutting away at the net to free the turtles and give them a chance at survival. One of them was just a baby and still had so much life ahead of it! He finally got to the last turtle, who was gasping for air. The net was extremely tight around the turtle’s neck and cutting off its airway. Finally, the brother was able to cut the net off of the turtle and save its life. These turtles were lucky to be found by someone who could help them before it was too late. The brother removed the nets from the ocean, so that no other animal would get strangled by the same net.

Footage recently emerged of a dead Vaquita an illegal totoaba gillnet in Mexico’s Upper Gulf of California. Vaquitas are the most endangered marine animal, with less than twenty left in the world. Unsustainable fishing practices are to blame for this species being so near to extinction. In this video, the poor Vaquita is completely entangled in the gillnet. Poachers poke the animal, but it is not moving so it is not clear whether the Vaquita survived. This video comes one year after Sea Shepherd found a dead Vaquita tangled in a gillnet and only a few days after their ship was attacked by poachers while they were removing illegal fishing gear in the Vaquita Refuge.

Iñaki is a scuba diving instructor near Byron Bay, Australia. While on a dive, he noticed a shark who had a fishing net hanging out of his mouth. The shark seemed weak and Iñaki knew that if he didn’t do anything, the shark wouldn’t survive as nets often keep entangled animals from being able to eat. Iñaki swam up and began his attempt to free the shark from the life-threatening net. The shark seemed to understand that Iñaki was there to help and stopped swimming so that Iñaki could help him. It took a few attempts, but finally, Iñaki was able to pull the huge net from the shark’s mouth. A few moments after, the shark returned with another shark and shared eye contact with Iñaki before swimming away. Now Iñaki educates people about the harm that ocean pollution causes and encourages people to protect marine animals by properly disposing of their trash.

If you haven’t already, eliminating fish from your own diet is the best way to protect marine animals. Encourage others around you to do the same to increase your impact and educate them about the havoc that the fishing industry wreaks on the underwater ecosystem. You should also avoid participating in sportfishing. If a fishing related event is taking place in your area, politely contact its organizers and sponsors to explain why angling is inhumane. Finally, avoid purchasing fish from pet stores. We need to protect marine animals and our oceans. Keeping fish off your plate is the best way to do so.

Sign this petition to Ban Gillnets that are Responsible for Killing Thousands of Dolphins and Other Marine Animals!

Ban Gillnets that are Responsible for Killing Thousands of Dolphins and Other Marine Animals!Click Here to Sign Petition