Meet William, the Clever Steer Who Learned How to Unlock His Own Barn Gate 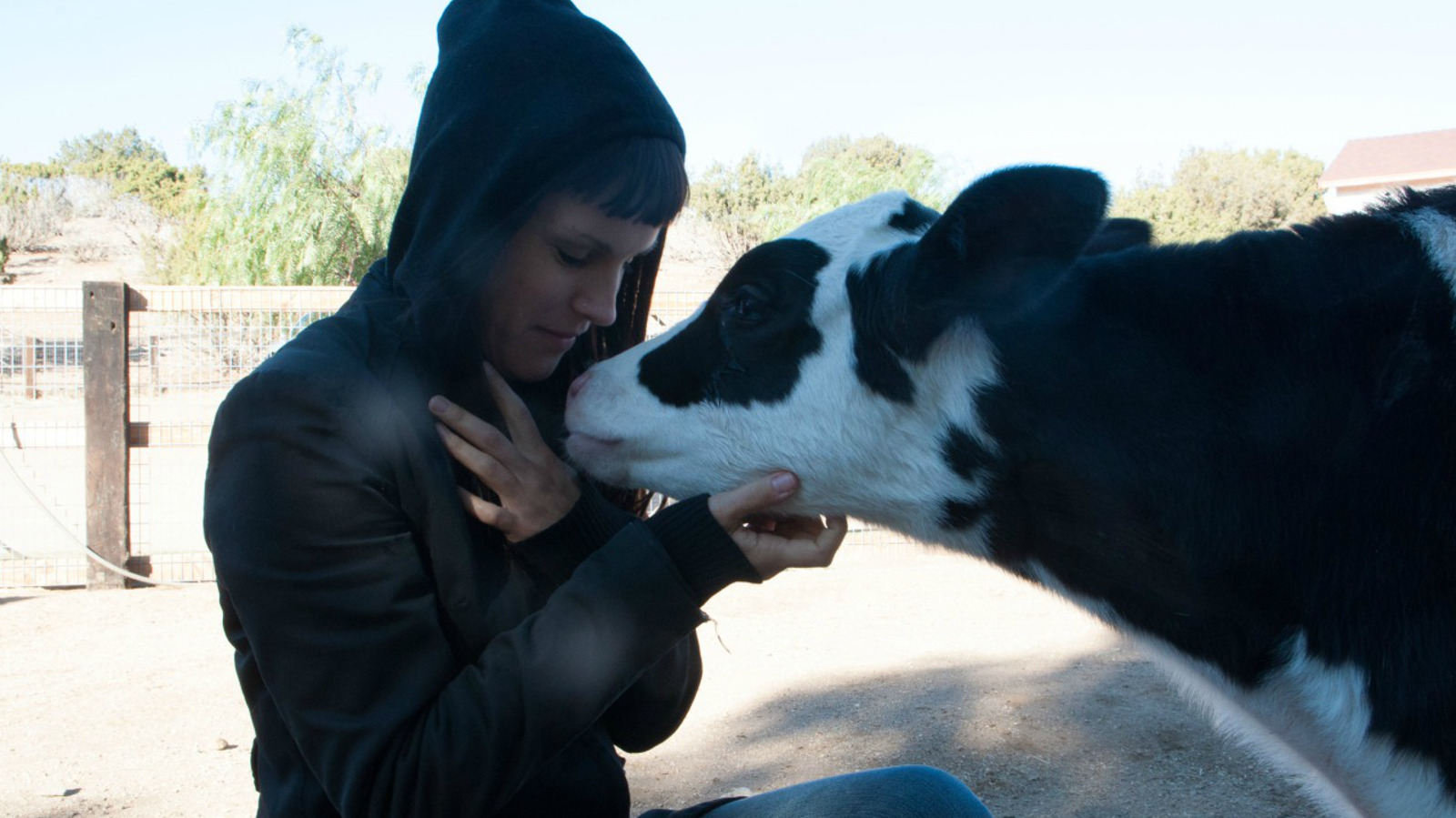 We were a bit surprised in 2011 when we received a call from a local Los Angeles wildlife rescue who were struggling to care for two young, Holstein calves named William and Harry. Wildlife rescues are an invaluable resource for raccoons, opossums, coyotes, and other feral friends, but not necessarily for cattle. Just how they landed there will always remain a mystery, but it was clear these two bull calves had been rescued from the dairy industry. Their story pre-wildlife rescue no doubt resembled that of millions of nameless bull calves, torn from their mothers and crammed onto a transport truck headed to slaughter. We were more than happy to welcome them to our Southern California Shelter.

Like so many calves rescued from stockyards and off of trucks, William needed a catheter immediately to provide both IV fluids and antibiotics. 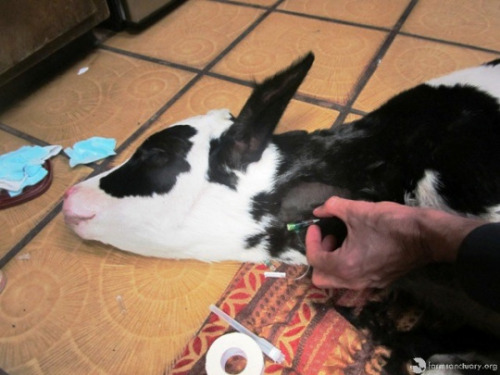 While both Holstein steer, the two calves couldn’t have been more different in temperament. Harry was terrified and bolted whenever we approached. Meanwhile, William seemed to settle in immediately, relishing his new life and basking in the affection of his doting caregivers. And he was comfortable being his goofy self, sucking leftover milk off of his Harry’s face. He’d jump, kick, run, and frolic about on the longest, lankiest legs that occasionally buckled under him like flimsy noodles, earning him the nickname “The Noodle.”

Noodle’s legs were growing  far faster than the legs of his buddy Harry. 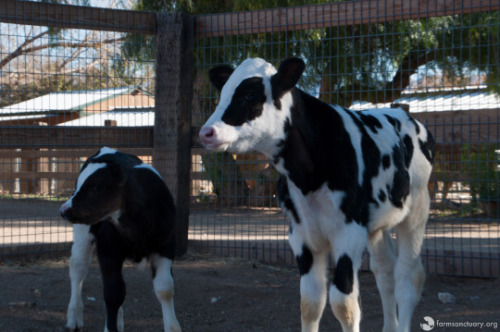 But as playful as he was, he wasn’t particularly interested in the rest of the herd. While Harry was immediately taken in by elders Paolo and Mr. Ed, William maintained his independence as somewhat of a loner. He slept and ate away from the herd. He would stay out at pasture alone in the winter, even as a very young steer, while the rest of the herd found warmth in the barn. He wanted to be out where there was action. Such was the case when he experienced his first snow. It’s a rare occasion for us to get any snow in the high Los Angeles desert, but when it fell on our Acton Shelter, William was still under a year old. He was so ecstatic that he forgot to eat!

He went out on his own, playing and kicking at the falling crystals and staring up at the sky, mesmerized as if he was trying to figure out what this white stuff was all about.

This was when we knew we had a thinker on our hands. All of those days and nights alone in the pasture… he had other things on his mind besides food, sleeping and play.

The Noodle wanted to know how everything worked. 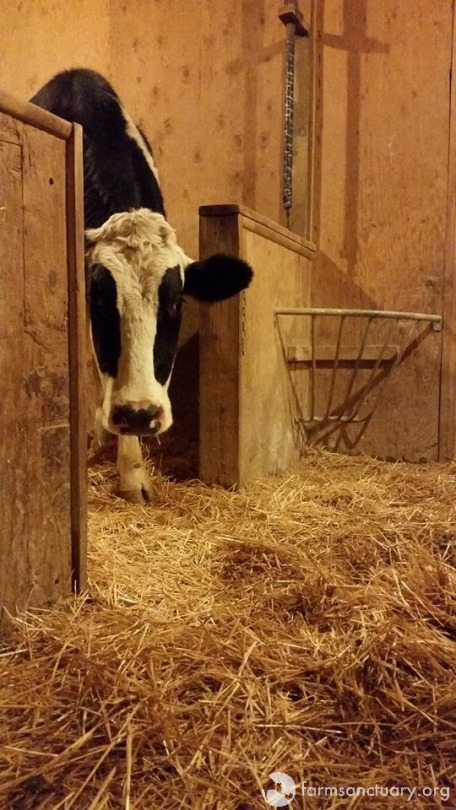 And of course, the one friend William did finally make was with Peanut steer, our resident troublemaker. Always with Peanut in the lead, William discovered the fun of making mischief – blocking the tractor, stealing cleaning buckets, sneaking into feed storage, and “managing” the human animals.

Peanut eventually moved to our Orland shelter, but William had learned enough – problem solving and trouble making made a great combination.

We came in one morning to find that the horse corral had been opened, allowing the horses to run freely into the cattle pasture, but most importantly, allowing the cattle access to the horse feed that was rich in orchard, alfalfa, and timothy – forbidden treats to all of the cattle. We quickly reorganized all of the cattle and horses, but would arrive daily to the same scenario. We knew who the culprit was. We knew who was smart and mischievous enough to figure out how to open gates, but we had no proof – until one morning when the cleaning staff arrived especially early, and the horses were still in their corral. We cleaned and waited, camera in hand, knowing that The Noodle would not be able to resist showing off his talents. And he did not disappoint. We have since learned how to “William-proof” the horse corrals and feed-storage gates; securing them with locks and bungee cords.

Hello, friend. I think I’ll just let myself in!

William continues to keep us on our toes, but sadly, at age four, he has begun to slow down. This is largely due to a condition called spastic paresis, which is quite common in the giant Holstein steer as well as in the females of the dairy industry. It manifested itself while he was still very young, and we assume it had been passed down from his mother. He is not as active as his brother (of another mother) Harry, and therefore, he has instead turned his attention to being a clever big brother to young steers Safran and Manolito. Through them, through the messes they make, the gates they have opened and the humanimals they “manage,” The Noodle’s antics continue…much to his delight. 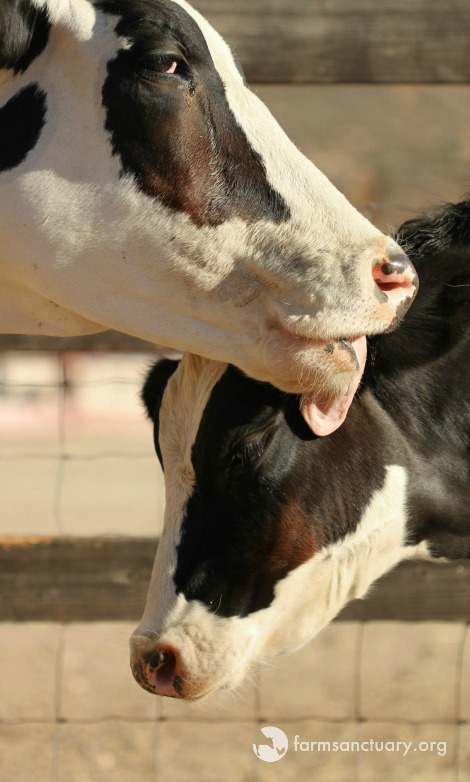 William continues to challenge us, entertain us and show us just how smart (and mischievous) cattle can be. He also serves as an ambassador for all bull calves who did not reach sanctuary; those babies who are as males considered of little value to the dairy farmer and are sold for meat. Millions of these calves are routinely taken away from their mothers to be raised for beef. Hundreds of thousands of other babies born into the dairy industry are raised for veal. Please share William’s story. Together, we can encourage awareness and understanding about suchunique individuals as well as the unfortunate truth about the dairy industry. With a growing number of delicious dairy-free and meat-free options and recipes, it’s never been a better time to make the switch. And it is one of the easiest ways to honor farm animals like William. With your support, we can continue to promote compassionate vegan living through rescue, education, and advocacy efforts. A compassionate world begins with you!