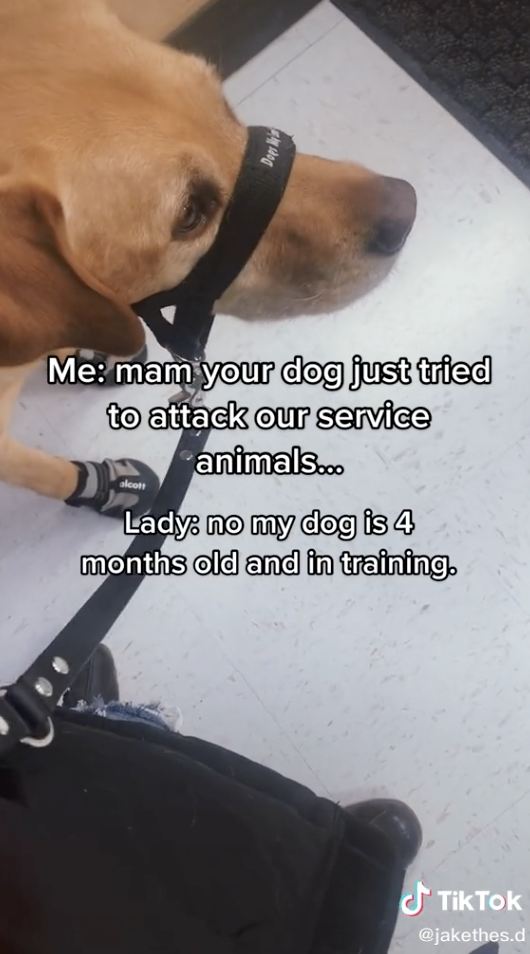 @jakethes.d This lady came at us with her dog, then countinue to harness us saying her ESA was allowed to be there in training. 🥺 #servicedog #serviceanimal #dog #fake #esa #disabled ♬ original sound – Jake❤️

A woman and her service animal were recently strolling through a store in Massachusetts minding their own business when they were lunged at by another dog. TikTok user @jakethes.d captured the incident and it now has over 9 million views.

The video shows a dog barking as it tries to run over to the dog’s owner Haylee and the service dog named Jake. The barking dog is in training to become an emotional support dog but was not officially certified at the time the video was taken. This sparked a debate about emotional support animals who are in training, and whether they should be given the same privileges.

“We have this dog for emotional support,” said the owner of the barking dog in the video. Haylee told this woman that emotional support animals are not the same as service animals, yet the woman claimed she has anxiety, severe panic attacks and suffers from anthropophobia, which is the fear of people. She also said she needs the dog for support even though he is four months old and in training.

TikTok user @jakethes.d  responded and said that if the woman’s dog has not completed his training, he is not ready to be in a non-pet-friendly store.