After the Ivory Crush in Times Square, the Race is on for the U.S. to Shut Down Illegal Ivory Markets

Every fifteen minutes an elephant is killed for the ivory trade.

The elephant poaching crisis was on the agenda of the U.S. – China Strategic and Economic Dialogue, that took place Wednesday June 24 in Washington DC.

The timing, then, of the ivory crush at Time Square in New York City is not lost on many who are watching the one-upmanship between two of the most significant consuming markets for elephant ivory.

When the U.S. Fish and Wildlife Service destroyed six tons of contraband ivory in November 2013, I wrote in a blog, the survival of elephants depends on our collective stand against ivory trade, expressing my hope that the U.S. ivory destruction would rally China to do the same. 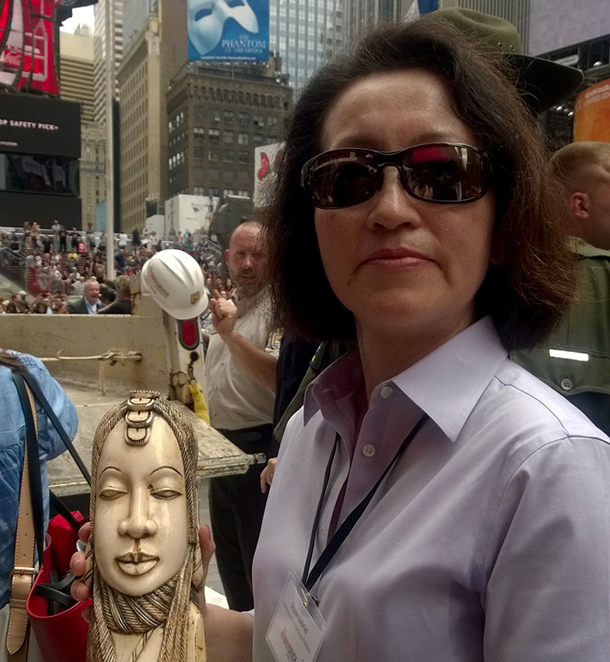 In fact, since then, nearly 50 tonnes of ivory confiscated from illegal trade have been crushed or torched in many countries and territories around the world, France, Chad, Belgium, Hong Kong SAR of China, Kenya, Congo-Brazzaville, and UAE.

In addition to supporting these ivory destructions, IFAW offices in UK and France have also organized destruction of ivory trinkets surrendered by our supporters.

Many enlightened IFAW supporters see the mere possession of ivory as shameful, and they don’t want the ivory items to EVER get into the markets again. We need to spread the message that ivory ONLY has value when it is on living breathing elephants in the wild.

Ivory markets are the ultimate culprit for the killing of elephants.

Ivory markets attach commercial value to the lifeless ivory trinkets, decoration and jewelry, all taken from thousands of elephants slaughtered.

Ivory trade anywhere is a threat to elephants everywhere!

While it’s widely known that China is the leading destination for trafficked ivory from poached elephants, the ivory markets in the U.S. have also attracted wildlife criminals to smuggle ivory internationally.

The ivory carvings and trinkets crushed at Time Square were confiscated from illegal trade on the streets of New York.

Crushing ivory serves as a reminder that ivory is valuable only to elephants.

If we want to save the last remaining elephants in the world, we have to crush the ivory markets, wherever they occur.

As an integral part of President Obama’s National Strategy to Combat Wildlife Trafficking, the U.S. Department of Interior announced more than a year ago to ban commercial ivory trade to shut down criminal markets that encourage elephant poaching.

While a rule change at the national level is progressing slowly, the states of New York and New Jersey have banned ivory trade at the local level, prompting a series of legislative initiatives in eleven other states across the U.S.

Following a directive to suspend ivory imports for one-year, the Chinese government also used the occasion of another ivory crush in Beijing at the end of May, to announce the pledge to halt commercial ivory trade in China.

On the eve of the U.S. — China Strategic and Economic Dialogue, I couldn’t help but hope for a race between the world’s two largest super powers.

This is not a competition for wealth and power.

But a noble race to save the noble giant — elephants.

The finish line for the race: Closing down the sinful domestic ivory markets that kill elephants.