Trio of Kittens Found Tied in Trash Bag and Thrown Into Garbage to Die Are Now Thriving in Their Foster Home!

These three “mixed nut” brothers, Peanut, Cashew, and Walnut, were placed in a trash bag that had then been tied closed last week, WPVI reported. The animal abuser then simply threw the bag filled with these three poor kittens into a trash can in north Philadelphia without a second thought. Thankfully, someone who lived nearby heard their tiny meows coming from the trash can and rushed over to investigate!

Lucky to be alive:
Peanut, Walnut, and Cashew were found tied up in trash bag in North Philadelphia.


They are calling these little fellas, the mixed nuts! They are absolutely adorable, their story tonight on @6abc pic.twitter.com/wcNJbkTTqo

Stray Cat Blues, a rescue and TNR operation, was called and assigned to this animal abuse case. A cat foster mom named Skye helped free the babies from the trash bag and brought them to safety. Despite their difficult past, Peanut, Cashew, and Walnut are all growing up in her loving home before they become eligible for adoption! 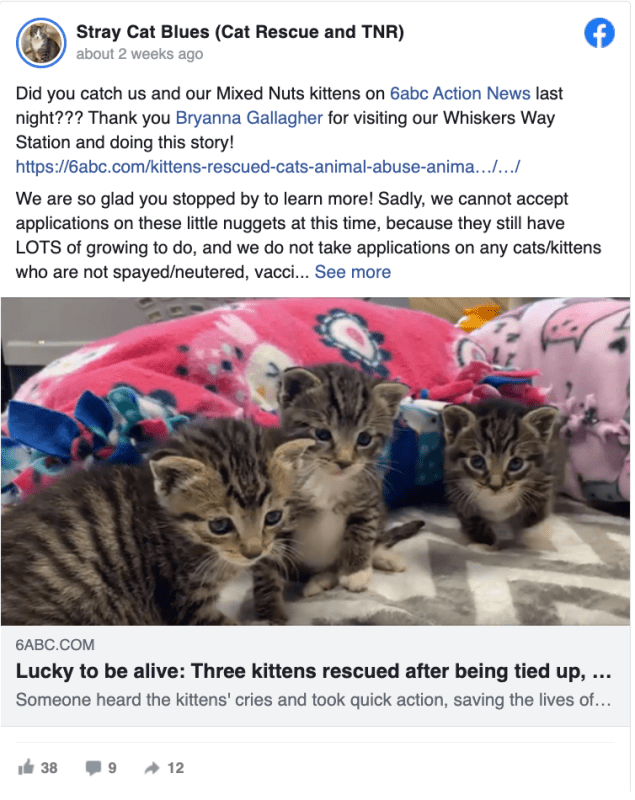 Their lives went through a complete transformation in just a week. Their foster mom, Skye, bottle feeds them every few hours, and even though they are only three and a half weeks old, they are growing so fast now that they are receiving adequate nutrition!

“We want these guys to find the best possible homes, whether that’s together or separately. We just want them to have their happy ending,” Stray Cat Blues volunteer Amanda Case tells WPVI.

Say hello to Peanut 👋🏻 he may be the smallest of the bunch, but he’s the loudest! @6abc

** Full disclosure, I stopped recording so he wouldn’t fall off me! ** pic.twitter.com/R1oYiSS0gf

If you happen to find kittens in public areas or near a roadside, and it appears like they need help or are in danger, take note of where you are and report it to the police or local animal sanctuary. It can be very scary for these animals to be in such a loud and unfamiliar environment, so it’s important to act fast to help get them to safety as soon as possible.