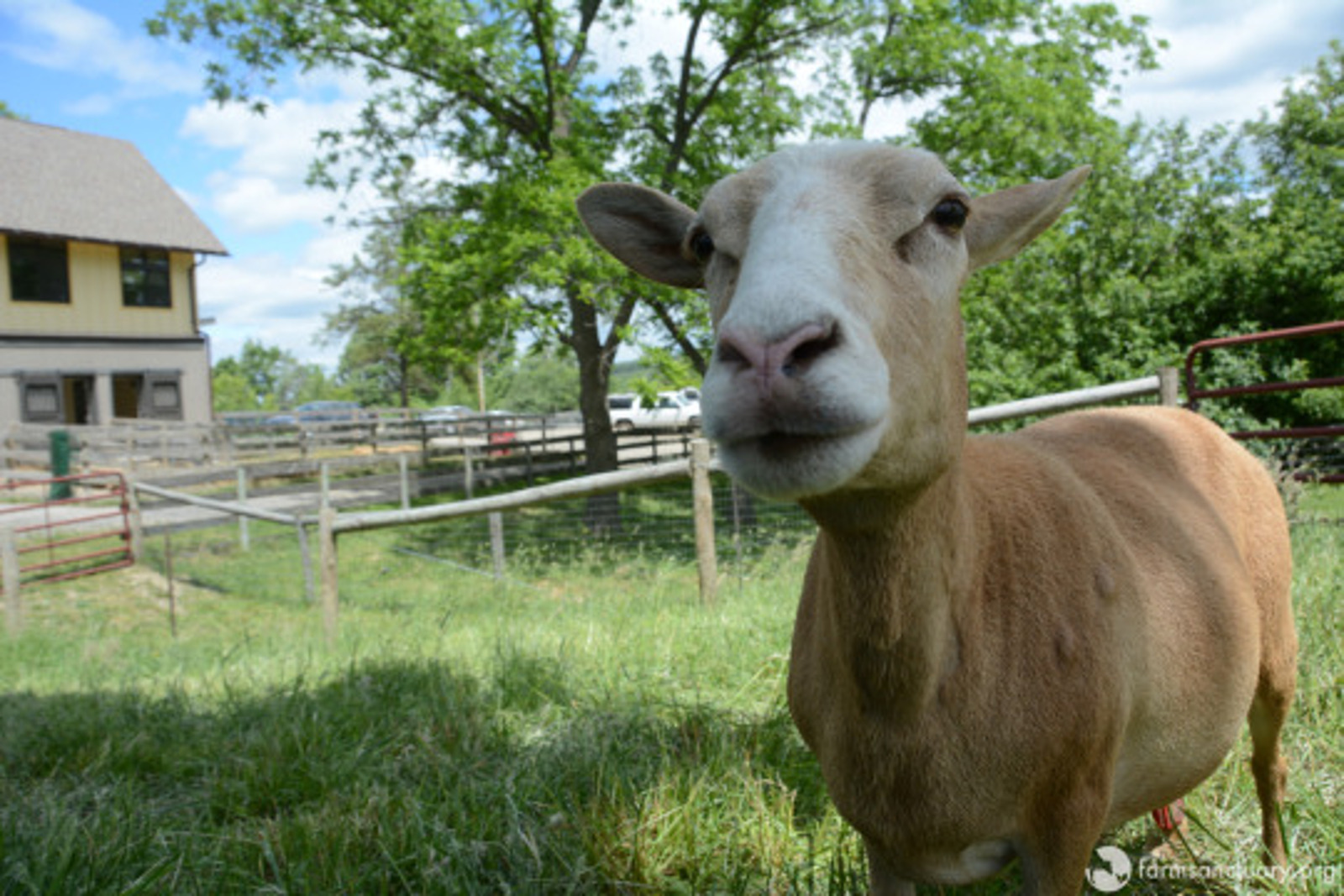 Being a victim of cruelty or neglect is already terrifying — but to be pregnant at the same time adds another level of vulnerability. The fear you have for yourself is only multiplied by the fact that a baby or babies will be relying on you — on your ability to take care of them.

Add to that the fact that sheep are prey animals, and already feel vulnerable when they’re unable to flee if there is a threat. So when we met the sheep of rescued from the Franklinville case, we expected that they would be terrified of humans —  and indeed they were. 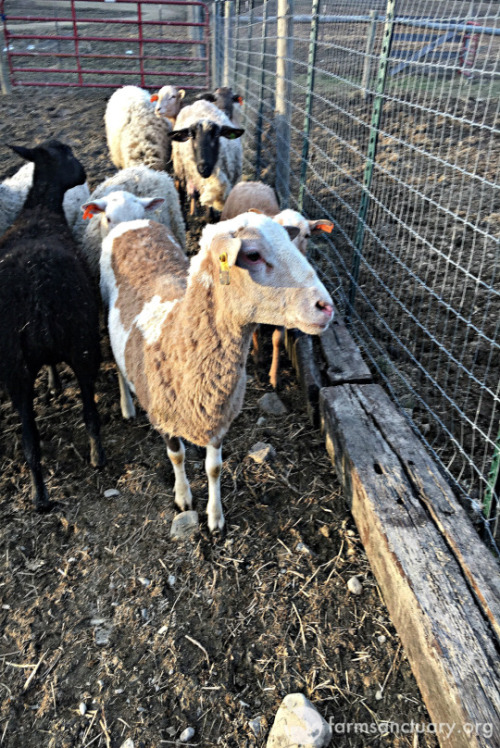 After trimming hooves and treating immediate needs including pneumonia, overgrown hooves, and abscesses, we wanted this flock of sheep to settle in.

They were terrified, and because of where they came from, that is no surprise. 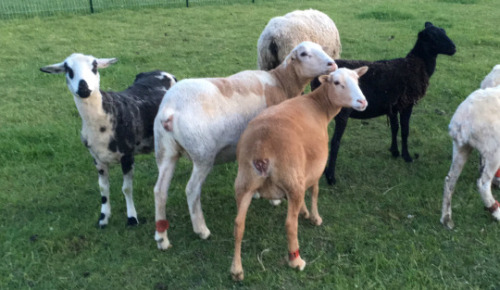 Docked tails on Daniella and her friends. (We had never seen such severely docked tails.)

For mothers from lambing facilities — where ewes (female sheep) are used to breed lambs to be sold for meat — the thought of having another baby, only to have it torn away from you, must be horrifying. 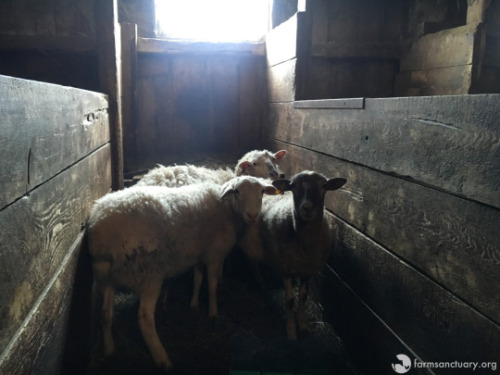 Ewes crowded into pens together, many of them pregnant.

And these sheep were clearly not really seen — there were 101 sheep, most ewes used for breeding, who never went outside and spent their lives in dark, damp, feces-filled stalls.

The Story of Daniella

Daniella was one of the sheep who arrived from this rescue, and sonograms and blood work showed that she was pregnant. Like all the other sheep, she was really frightened of us — but as we do with all beings who arrive at our shelters, we just let her take her time and be herself. 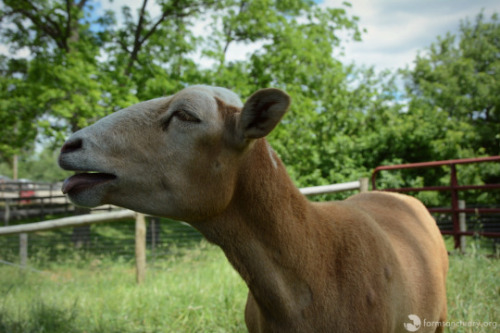 Daniella is a big talker with people and sheep. She’s a Katahdin sheep, which is a hair sheep; they naturally shed out their winter coats and do not need shearing. These sheep are also exclusively used for meat — or lamb.

When it became clear that birthing was near, we pulled Daniella, Izzy, and Zepha, who had clearly been bred very close together and were all due at the same time. During this time, something amazing happened. 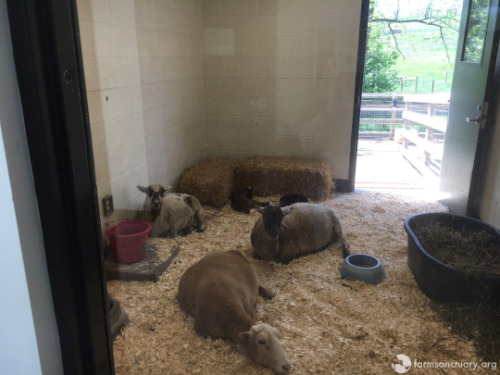 The mothers-to-be getting bigger and bigger, waiting for delivery day —  Daniella and Zepha looking uncomfortably pregnant.

Daniella decided we were not all that bad — in fact, she really decided that we were pretty cool. And why that happened we may never know; we can only say how amazingly happy we are that a beautiful sheep, a frightened and vulnerable sheep, decided to forgive humans, take a chance, and trust again. 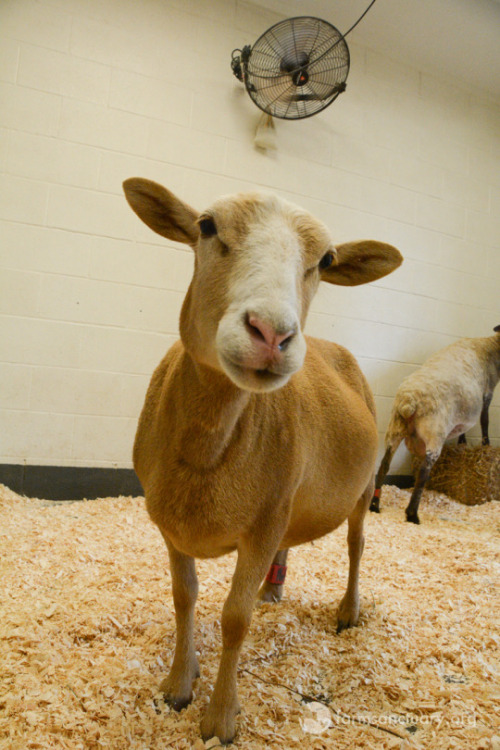 Now this beautiful sheep longs for the friendship of her humanimals. We are very lucky to have this beautiful girl with us!
Stay tuned for baby news and more with the amazing beings from this horrible neglect case.