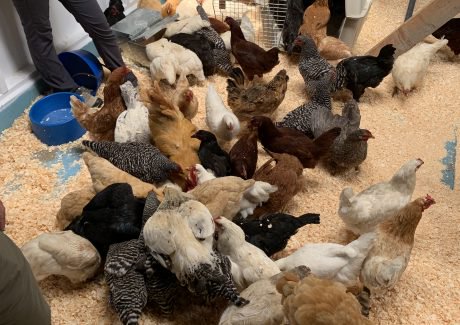 A quick google search will explain that “stewing hens” are expended egg laying hens used for their “meat.” Yes, you read that right. After the innocent hens are forced to reproduce and suffer from confinement, abuse, and neglect for their few years on earth, they are slaughtered for food and named “stewing hens.” That’s why when an animal ally from Woodstock Farm Sanctuary saw the craigslist ad below, they felt the need to act immediately.

On Aug 9, 2019, Woodstock Farm Sanctuary teamed up with Barn Sanctuary to rescue almost 100 chickens. The birds needed immediate medical attention, and were seen by the shelter team who performed what they call a “triage” to each of the birds. According to a Woodstock representative, the triage included looking for any physical ailments like limping and broken wings, taking the weight of each bird, and checking their beaks, eyes, and overall bodies for any issues.

While performing examinations, the team members realized that the birds were younger than typical “stewing hens.” “We were told and assumed that these were all hens who were between the ages of two and three and weren’t laying as many eggs…but we are shocked that many of these birds are under six months old, meaning that this farm had too many chickens and was just selling these very young birds to be killed by anyone who answered the ad,” says Rachel McCrystal, Executive Director of Woodstock Farm Sanctuary. 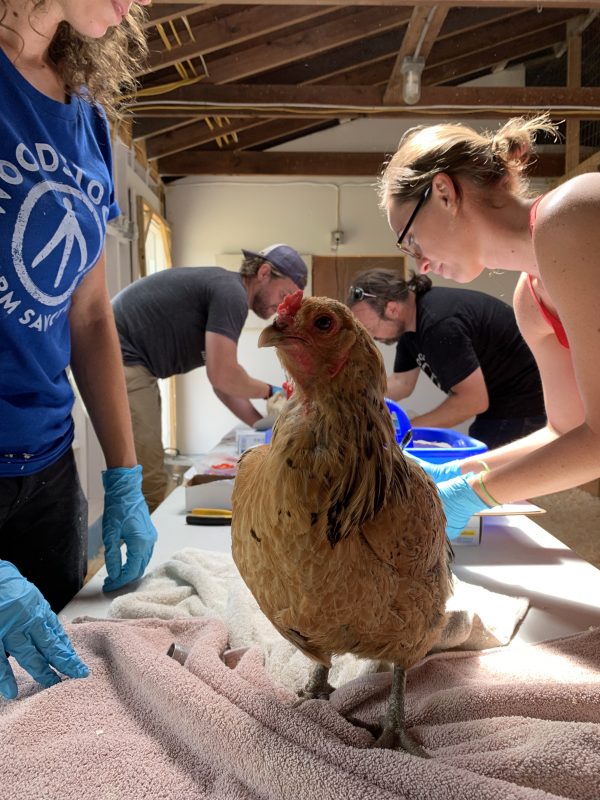 The Hudson Valley “humane” and “sustainable” egg farm also told the rescue team that there were 60 hens, but there were actually 98 chickens in total, including eight roosters. The team decided that working together to care for and house the large group of chickens is the most logical route. According to a Woodstock representative, Barn Sanctuary will care for ten hens and two roosters, leaving 86 to Woodstock who will try to find other loving homes for the birds while taking responsibility for their care, ultimately housing them if necessary.

Egg laying hens suffer tremendously in the animal agriculture industry. It is widely known among people who take care of abused farm animals, such as farm sanctuaries, that hens modified to produce eggs for food lay approximately 10x as many eggs as they should naturally. This causes stress to their bodies, leaving them ill. That’s why this rescue has propelled Woodstock to begin their new ‘Consider the Egg’ campaign with the main goal of raising awareness regarding what egg industry chickens go through in an educational cartoon based graphic. The sanctuary is also asking for donations toward the care of the rescued chickens they are calling the “Hudson Valley 100.”