Life After Captivity: How Sanctuaries Better the Lives of Whales and Dolphins 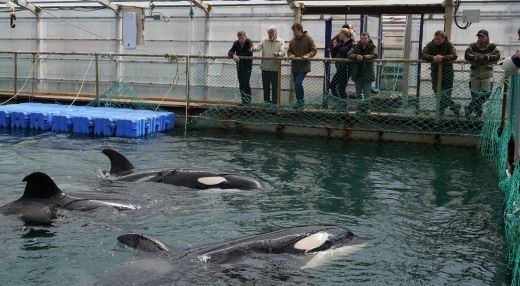 Last year, almost 100 beluga and orca whales were illegally captured in the Sea of Okhotsk by companies that sell marine mammals to aquariums and marine parks. The captured cetaceans were kept in icy pens in Srednyaya Bay in eastern Russia while they awaited their fate. After a drone captured aerial footage of the tiny sea pens and icy waters, the facility sparked international outcry and quickly became dubbed the “Whale Jail.”

International media, animal rights organizations and influential people began calling on the Russian government to release the animals back into the wild before more damage was done. Having been made aware of the dire situation facing these orcas and beluga whales, Jean-Michel Cousteau and the Whale Sanctuary Project reached out to President Putin to offer their assistance in evaluating the health of the animals and recommending an approach to return them to the wild. After receiving a formal invitation to visit Russia, the team of marine mammal experts found that the health and lives of the whales were more at risk with each passing day. Some of the whales were showing signs of frostbite and others appeared to have eye infections. Furthermore, three belugas and one orca disappeared. While the companies behind the capture claimed they escaped, most experts familiar with the situation believed that they died from health issues related to being kept in captivity.

After months of public outrage, Russian authorities brought charges against the four companies behind the capture and ordered the release of all beluga and orca whales held at the whale jail. However, it’s not as simple as simply opening the gates of the sea pens and setting them free. Releasing captive animals back into the wild is a tricky situation, and it gets harder the longer an animal is kept in captivity.

“What we have always known is how easy it is to capture a whale, and how difficult it is to put one back,” said Charles Vinick, Executive Director of the Whale Sanctuary Project.

Over the course of several months, an international team of experts continued to provide advice to the Russian government to develop plans to release the cetaceans back into their natural environment. The release program began in June. To date, all 10 orcas and 37 of the belugas have been successfully returned to the ocean, but there are still 50 beluga whales awaiting release.  Time is of the essence, as the operation must be completed before winter storms arrive in November.

This complex mission has been in the works for over a year, illustrating how complicated it can be to successfully release animals into the wild once they have been kept in captivity. Animals can become dependent on humans, lose basic hunting and protection skills, and experience weakened immune systems. Improperly releasing them back into the wild can be detrimental to the survival of the animal.

Beyond their aid in Russia, the Whale Sanctuary Project’s ultimate goal is to create seaside sanctuaries for whales and dolphins who are being retired from entertainment facilities or have been rescued from the ocean and need rehabilitation or permanent care. While there are many sanctuaries for land animals that have been retired from zoos and circuses, it is now time to create them for whales and dolphins so that they are not confined to concrete tanks for their remaining years.

Through the seaside sanctuaries, the Whale Sanctuary Project hopes to create an environment as similar to the open ocean as possible, in terms of acoustics, natural saltwater, and other species living in the enclosure. This can serve as a place for whales and dolphins to live happily and comfortably for as long as they need to, while still having necessary human care. “We can give them back many aspects of an authentic life they’ve been deprived of in entertainment parks,” says Lori Marino, President of the Whale Sanctuary Project.

“We can’t undo all the harm we’ve inflicted on cetaceans by keeping them in captivity, but by providing them with seaside sanctuaries, we can improve their quality of life. That is our goal,” said Naomi Rose, Board Member of the Whale Sanctuary Project, in a blog post.

How can you help?

The Whale Sanctuary Project was in Russia earlier this year and continues to provide expert opinion and recommendations. Donating to the Whale Aid Russia program is critical to continuing what is already the largest whale rescue event in history.

The driving force behind the capture of the Russian whales last year is the growing popularity of marine parks and marine mammal shows in China. While live animal shows have become less popular in North America, with Canada even banning cetacean captivity this year, China has seen a rapid increase in the development of marine parks, jumping from 39 to 76 in just four years.

The captivity industry ultimately drives the hunt for whales and dolphins, so the best way to end this practice is to refuse to support facilities that keep dolphins and whales captive for human entertainment. Take the pledge to not buy a ticket to a dolphin show, use your voice to educate others, and support organizations like the Whale Sanctuary Project and others working to better the cause.