4 Rescued Greyhounds That Prove Life is Possible After the Track 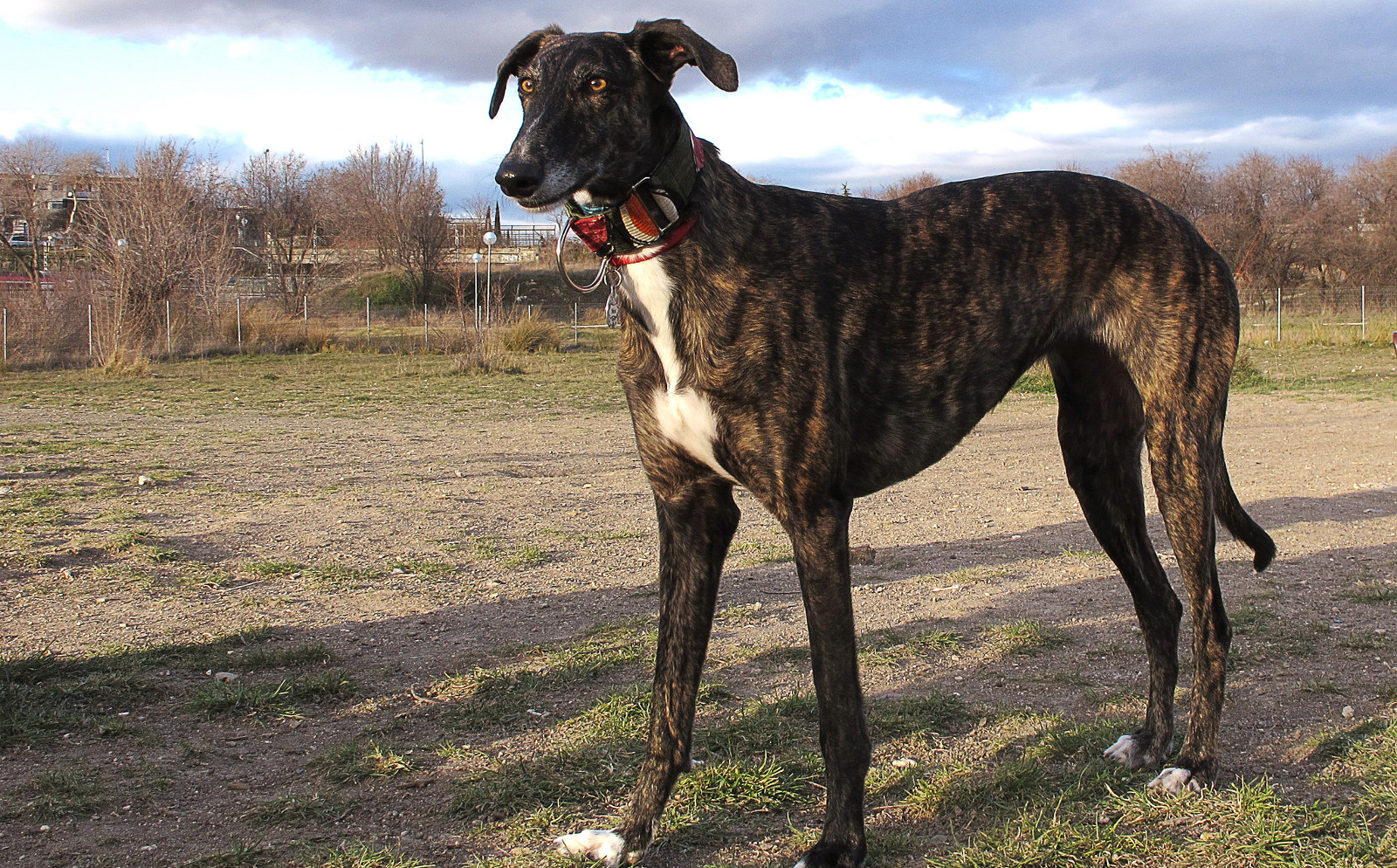 When we compare the way that people treat dogs and cats in comparison to how they treat farm animals or wildlife, there is little denying the fact that domestic pets enjoy a much higher status. We consider dogs to be more than just animals who share our homes, but beloved members of our families, and yet, in one industry dogs are abused and exploited to the same degree as pigs on farms or elephants in zoos: the Greyhound racing industry.

The Greyhound racing industry largely exists under the radar for most Americans. Many are familiar with the concept, but it is not as popular of a sport as it used to be – this, however, does not mean that the suffering of dogs subjected to this life is any less. Grey2K and the ASPCA recently released a report documenting the realities of greyhound racing, showing that the fight to end it is ongoing. There are a totals of 21 Greyhound racing tracks in seven states, and approximately 300 Greyhound breeding facilities and kennels in the United States which allow this cruel industry to persist.

Life as a racing dog can only be described as uncomfortable, unhappy, and in many cases, deadly. This is evident with 11,722 injuries documented from January 2008 to November 2014 (and this is only those that are reported). These dogs are forced to live in cramped cages for a minimum of 20 hours a day. They are removed only to race and go to the bathroom. Once they are no longer profitable, they are often killed. Luckily, there are people and organizations who rescue these dogs when they are injured or “retired” from the race track. The dogs profiled below show how amazing Greyhounds are and some of the organizations and kind individuals out there saving them every day. These dogs show that there is hope for racing Greyhounds after the track. 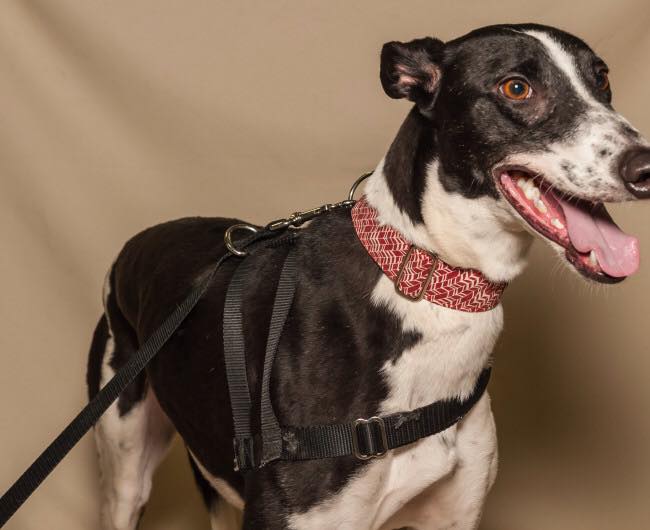 Jett was adopted from Kansas City Retired Greyhounds As Pets (KCRGP). This non-profit started in 1990 to find homes for retired greyhounds and since then has put over 5.000 greyhounds in homes. Greyhound racing trackings are actually no longer allowed in Kansas, but the National Greyhound Association is located in Abilene, Kansas along with many breeding farms. The dogs the organization received range in age from one to nine years old and are given extensive medical and behavioral care to ensure they find success in their new homes.

Jett came to KCRGP when he was two years old and placed in a foster home to help him adjust to life after the track. His foster family describe this sweet pup as being shy and nervous in new situations. It took Jett a little while to feel comfortable living around people, but once he did, his gigantic, loving personality blossomed. Now that he no longer has to race, Jett is learning to enjoy the little joys of life as a pet, like yummy treats and belly rubs!

Lewis was adopted by an ASPCA staffer, Lauren, and her fiancé after he was retired from life on the track. Like all dogs who were used for racing, Lewis has a tattoo on his ear with his birth date, litter number, and ID number. After absolutely falling in love with this pup, Lauren decided to do a little digging into his past and learned that he had participated in 40 races during his three years on the track (this is considered a “long” career for most dogs). Lewis lived in a cramped cages, stacked among many other dogs at the track. He only came out of this cage to train or use the bathroom, a total of four times a day. Knowing this background about her newly adopted dog, Lauren was less shocked by his thin frame and flea dermatitis – both of which went away after he was given proper care.

With this horrific life behind him, Lewis has transformed into a wonderful, loving dog who bears no scars of his traumatic past. According to Lauren, “Lew lives for the tennis ball and will jump eight feet in the air for it. He spends weekends playing in our backyard and at the neighborhood park.” Now that sounds like a proper life for a dog. 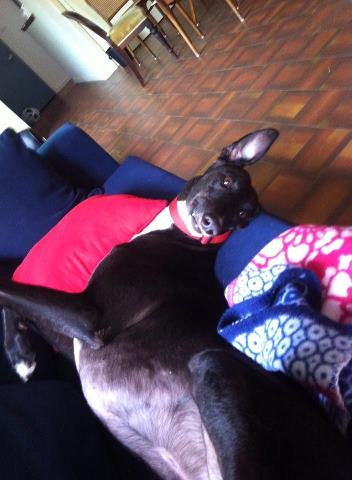 Tubby was rescued from the racing track when he was four years old by Amazing Greys. Although he might be considered a young pup under any other circumstance, in the racing circuit he was an old man. Years of being abused by his trainers left Tubby wary of males and extremely anxious and skittish, two traits that made it more difficult for him to find a forever home. Luckily, two lovely foster parents stepped up to help this sweet Greyhound adjust to life after the track. During his first few days in a home, Tubby wouldn’t touch his food and seldom moved from his dog bed. His unease around men was so severe that even just the sound of a low voice would make him retreat in fear.

Thankfully, Tubby’s foster parents were very patient and caring. It took three weeks to gain Tubby’s trust, but once they did, he truly came into his own. His foster parents soon became “foster failures,” when they decided to adopt him as their own! This happy Greyhound now spends his days cuddling with his human mom – and dad. 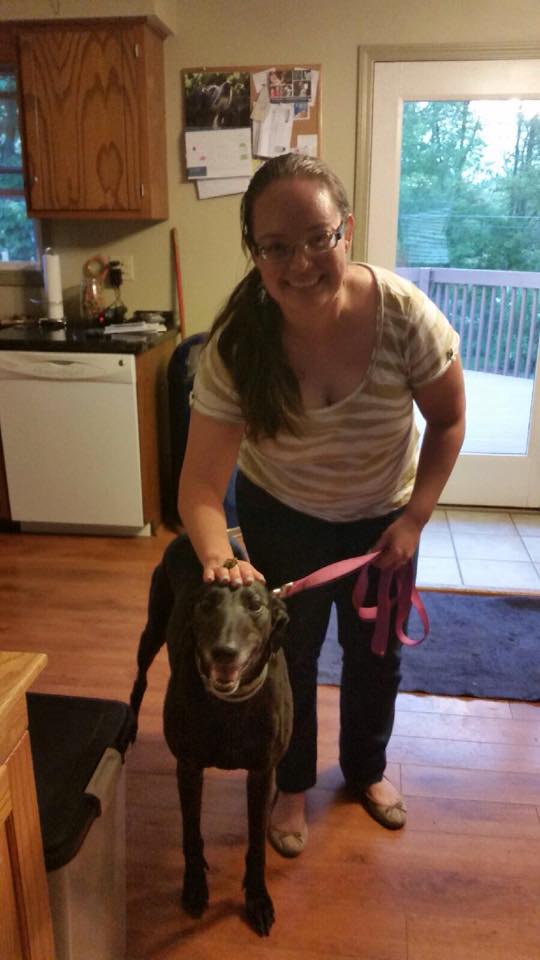 Emily was saved by American Greyhound, Inc. when she was around three years old. This gorgeous Greyhound was not used on the race track, but her life was no less miserable. She was tragically used for breeding for underground racing or field trial dogs. Breeding dogs are treated similarly to dogs who live in puppy mills. They exist solely for producing puppies, who are regarded as commodities. The experience of being constantly bred while living in a small cage without proper food or medical attention is undoubtedly a traumatic one for any animal.

Despite her past, Emily was able to maintain a sweet and docile disposition when she was rescued. She temporarily lived with a family for two years until they were unable to care for her, but she did show how peaceful she was and got along with everyone, human and animal. Her favorite activities include basking in the sun or sleeping in a soft bed. She hates thunderstorms, though. Luckily, she found a forever home where she will be protected.

These adorable dogs show the face of the greyhound racing industry. They are all now in happy forever homes, but they also had to deal with the pain and fear that accompany greyhound racing directly or indirectly. Hopefully, they will inspire you to take action and consider adopting a retired greyhound if you can or donating time or money to these or other rescue groups!