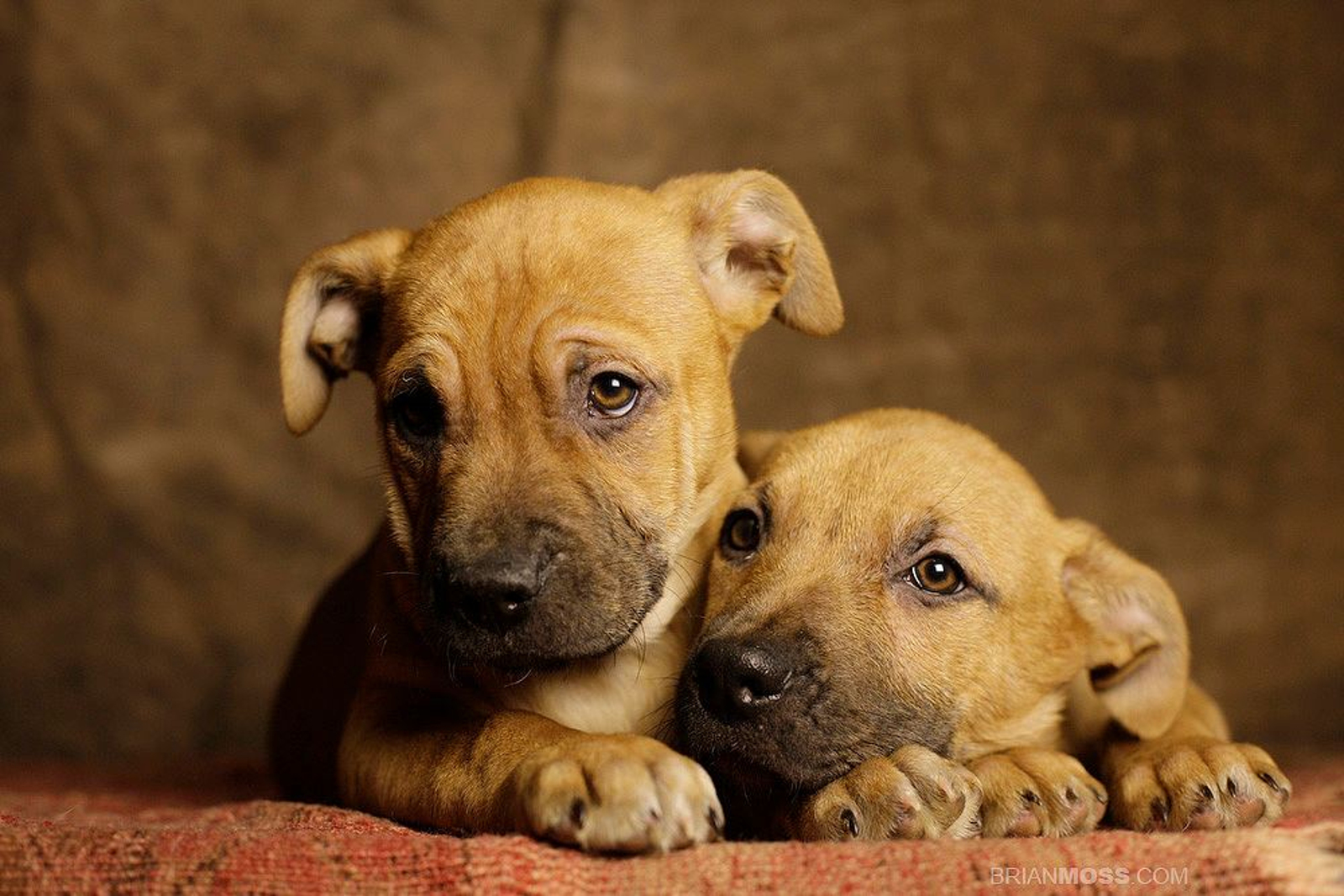 There are over 70 million stray animals in America, of which only three or four million are adopted a year. So what happens to those other 67 million animals? Some remain homeless, others are captured and euthanized by animal control or “kill” shelters that cannot afford to care for them, but some find themselves in wonderful “no kill” shelters where they are allowed to live out their final days, without an impending deadline for adoption.

The problem is, like regular shelters, “no kill” facilities only have so much space and genuinely want to find each and every animal in their care a safe, happy forever home. But with small budgets and little time to devote to advertising animals looking for a home, finding a forever home for hundreds of animals can be very difficult for a local shelter operation.

This is where photographer Brian Moss comes in. Moss works for the Bergen County Protect and Rescue Foundation, a small “no-kill” shelter in Northern New Jersey. Staging individual portraits for the local stray and surrendered animals residing at the shelter, Moss has been able to use his passion and talent for photography to help give a new life to a countless number of dogs.

Moss’ project (though he dislikes the term, for it implies there is a set end to it) “Rescue Me” is a moving, stunning work that captures the beauty and personality of the animals that come to Bergen County Protect and Rescue looking for a permanent home. 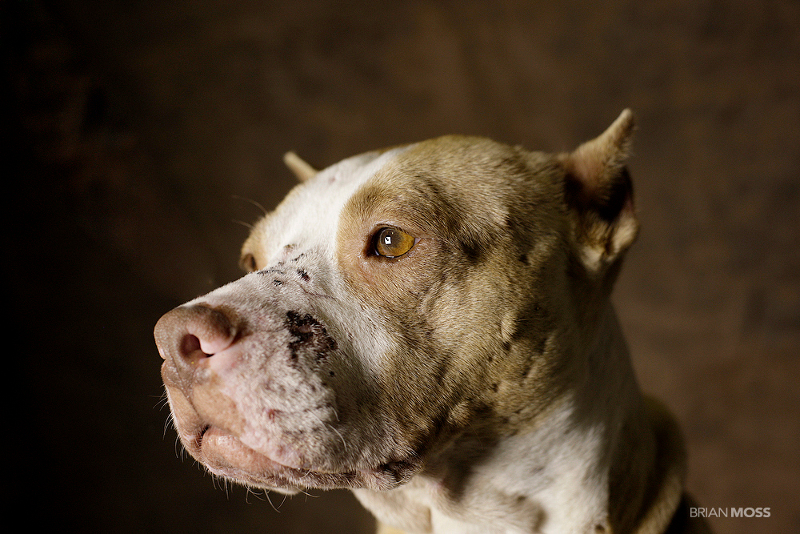 When asked how he would describe himself as a photographer, Moss replies,”besides accidental?” He explains that he only got into photography after running a gym for 15 years and picking up a camera on a whim to capture the bodybuilding culture he observed. Of his style, he is “concerned with authenticity and clarity. I want my photos to be honest. Strength and vulnerability do no preclude one another in the same photograph.” This philosophy is readily evident in the photos he captures of the dogs at Bergen Protect and Rescue. 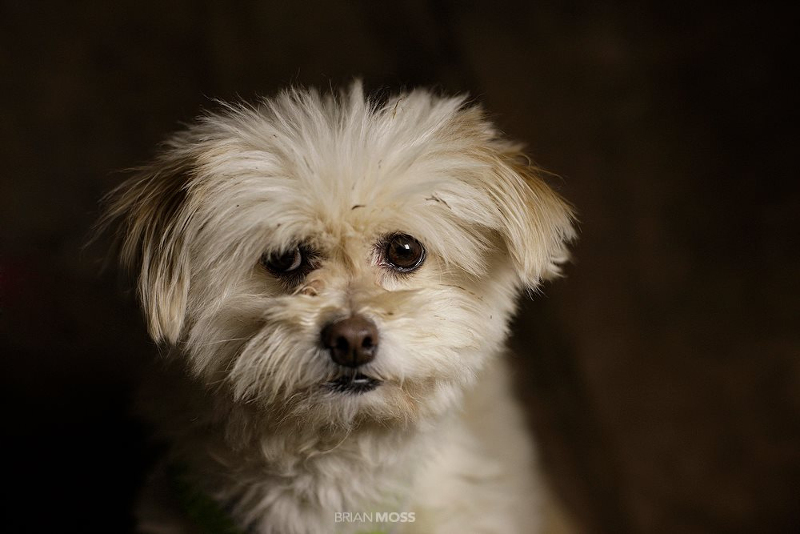 To Moss, “a good animal portrait breathes life into its subject,” by placing these photos on a public platform, like Facebook, he is able to capitalize on the photograph’s ability to capture the personality of his subjects and publicize their plight for millions to see. 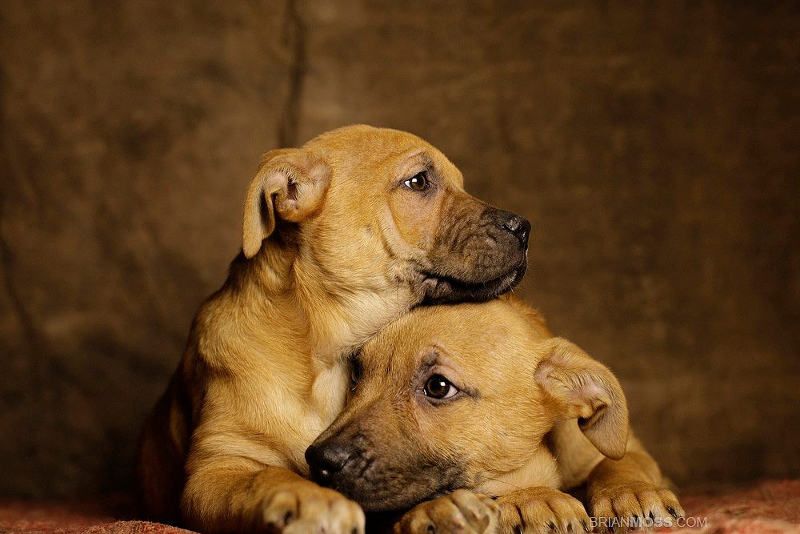 Moss began photographing animals after adopting a young pit bull who became his “muse.” After adopting his own dog, he tells OGP that he had a moment of clarity, “discovering the website ‘PetFinder,'” shocked by the number of animals that needed homes, he couldn’t help but wonder, “why do pet stores even exist?” A long-time animal lover, Moss decided it was time to “walk the walk” and begin to devote his time to giving back to the countless animals in need.

In the mission statement for the “Rescue Me” project featured on Facebook, Moss writes, “a few weeks ago I found a small ‘no kill’ shelter in North Jersey. I filled out a volunteer application to do what ever they needed done, but it only seemed logical that I try to leverage my experience as a photographer as a way to capture the spirit of their adoptable dogs and cats by taking their portraits.”

The inspiration Moss has been able to draw from these animals is only magnified through his prints, Moss explains, “The hope is for others to see their portraits and see beyond their identifiers as ‘strays’ or ‘owner surrenders’, to reimagine these cats and dogs as a vital part of their own lives. A second chance.” 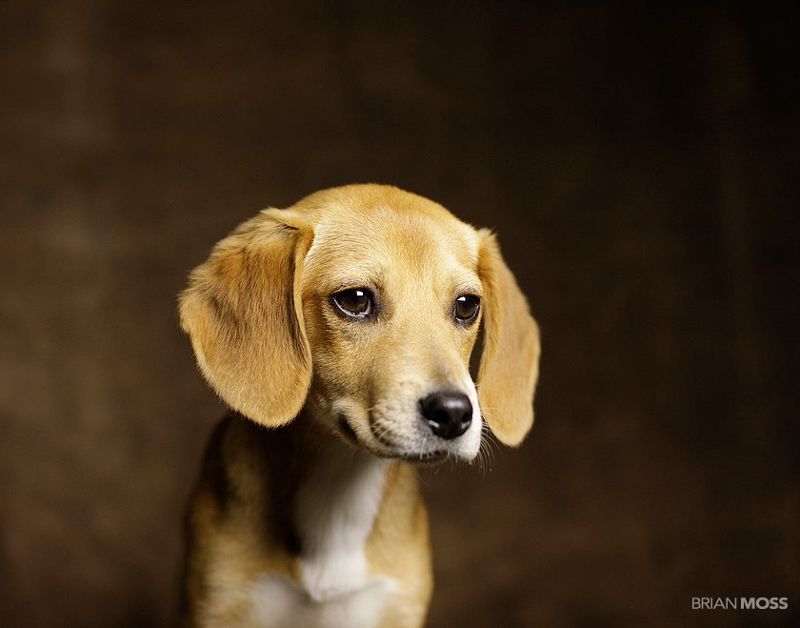 Above all, Moss tells OGP he wants people to know that shelter dogs “are not broken.” As far as he is concerned, his work will never be done photographing these dogs because it is not a task that can ever really be “caught up on” as long as their are dogs looking for homes, Moss will be behind a camera working to get them just that.

Here are a few more photographs from the collection. Moss regularly updates the photos on the “Rescue Me” Facebook page, so be sure to follow for more photos! 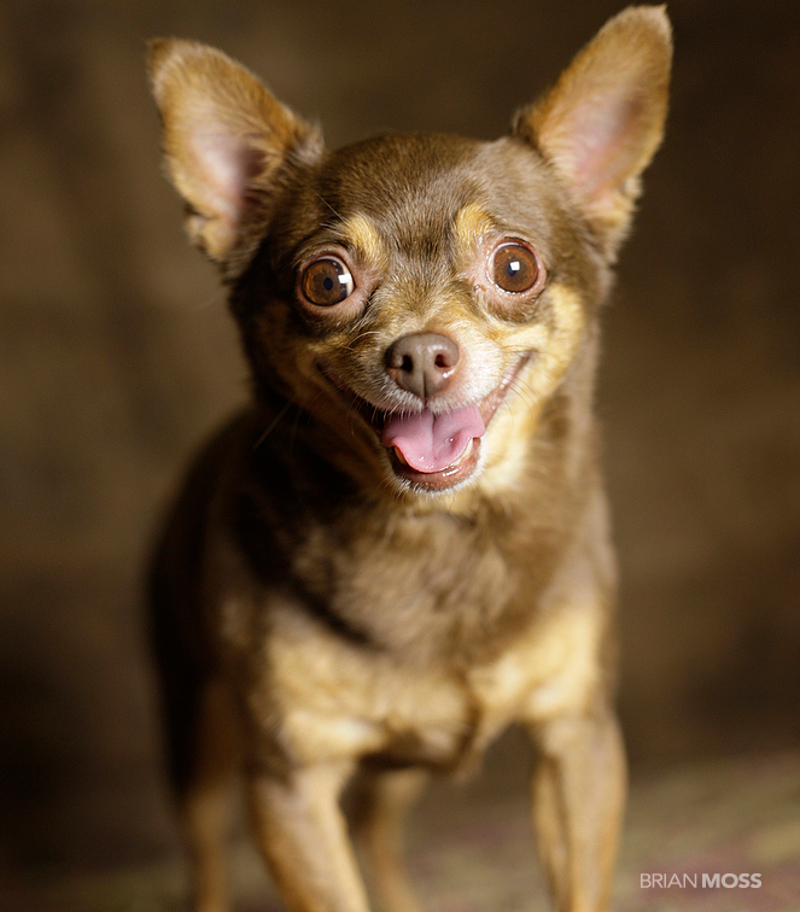 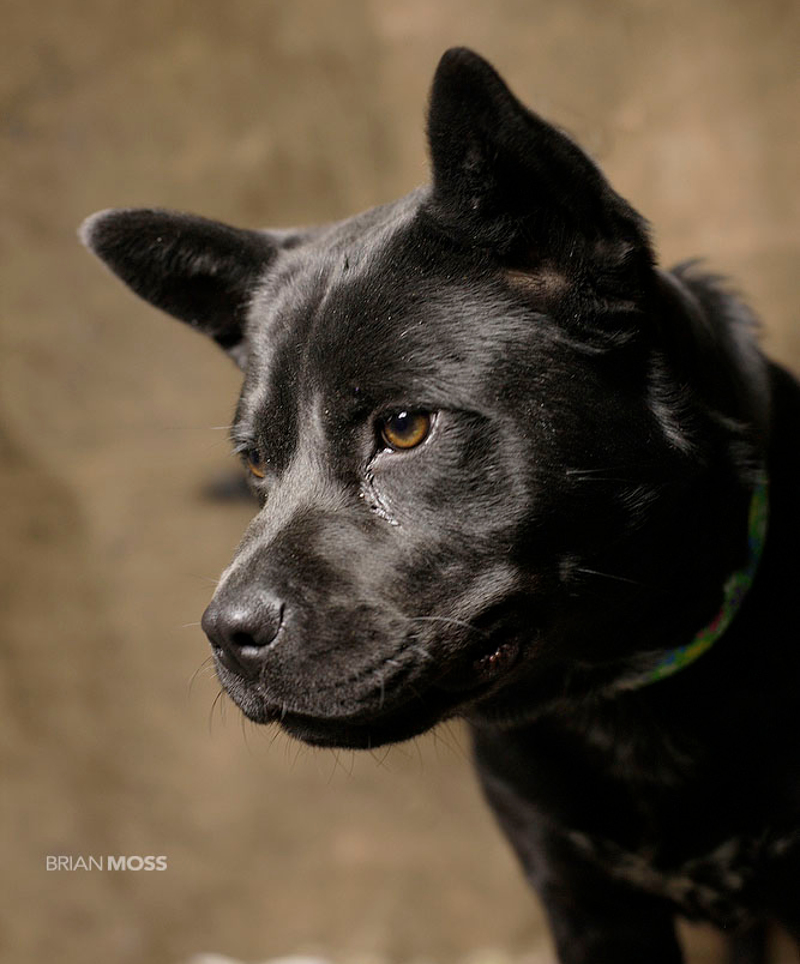 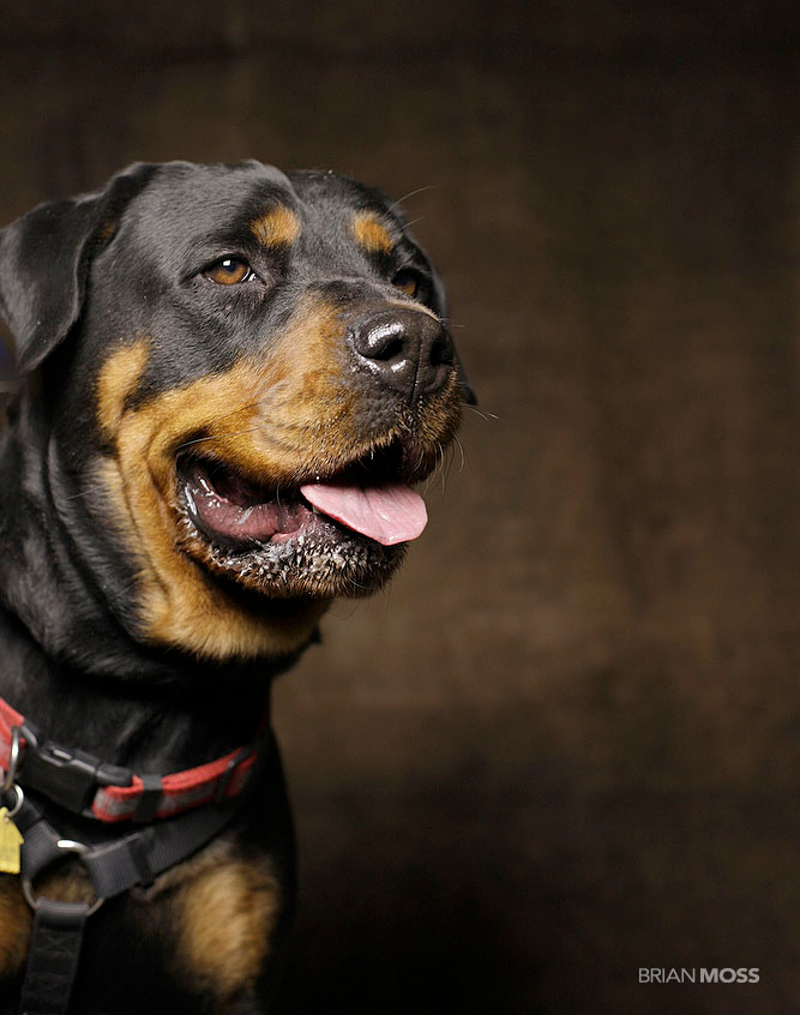 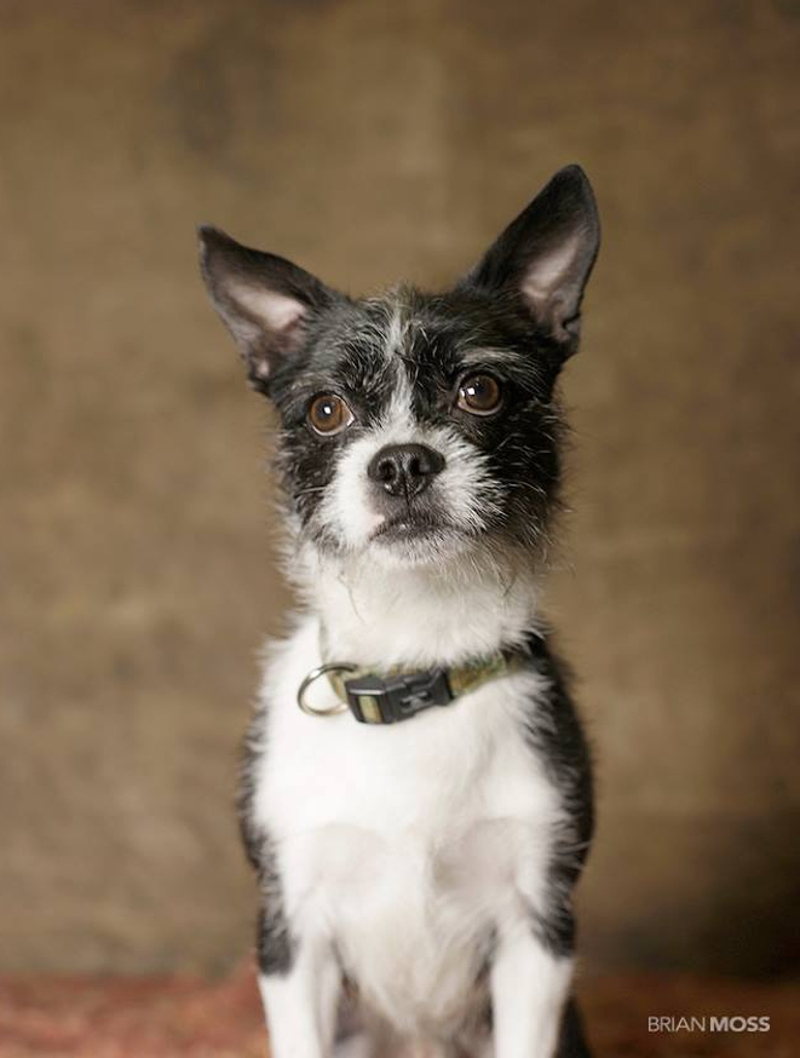 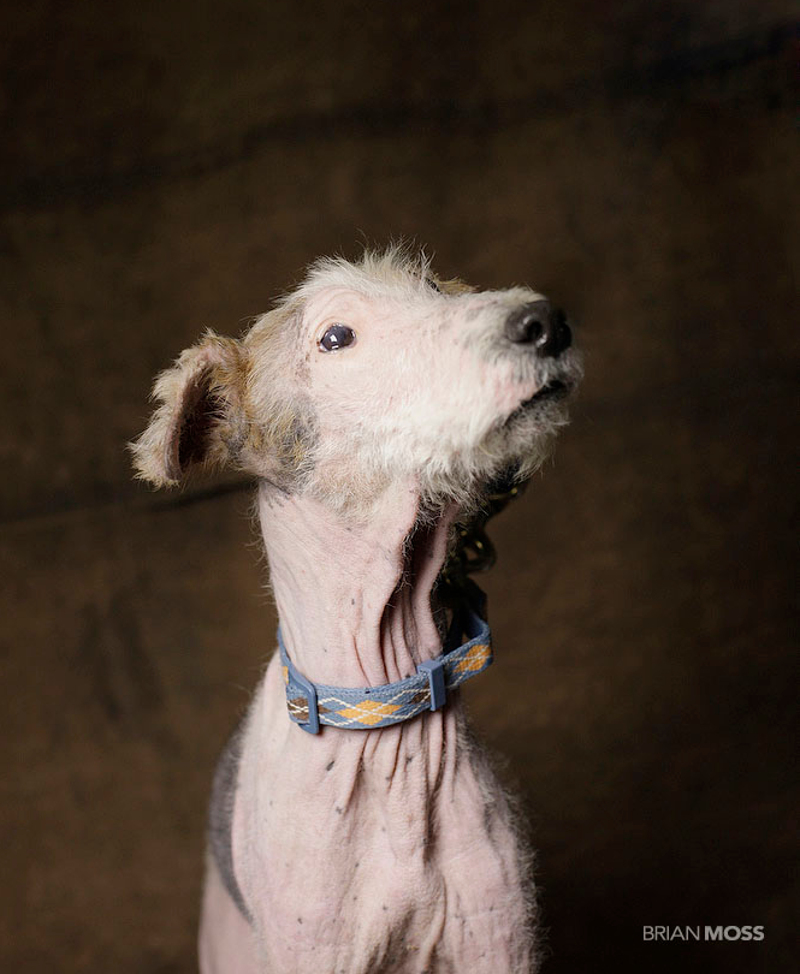 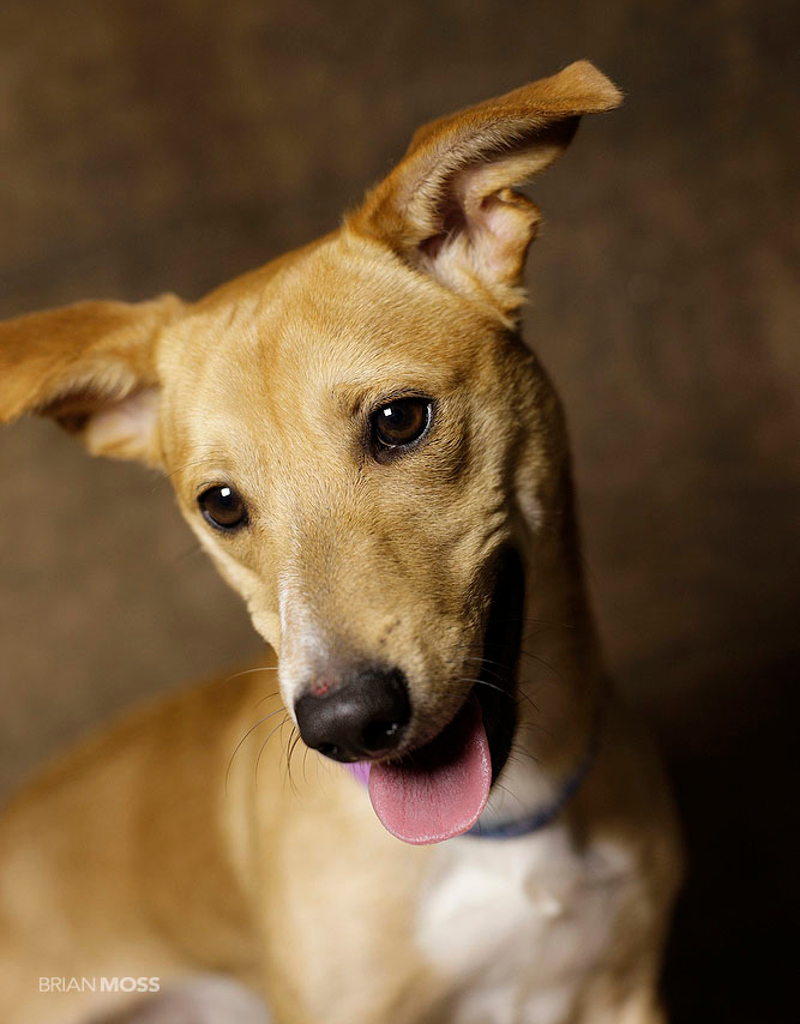 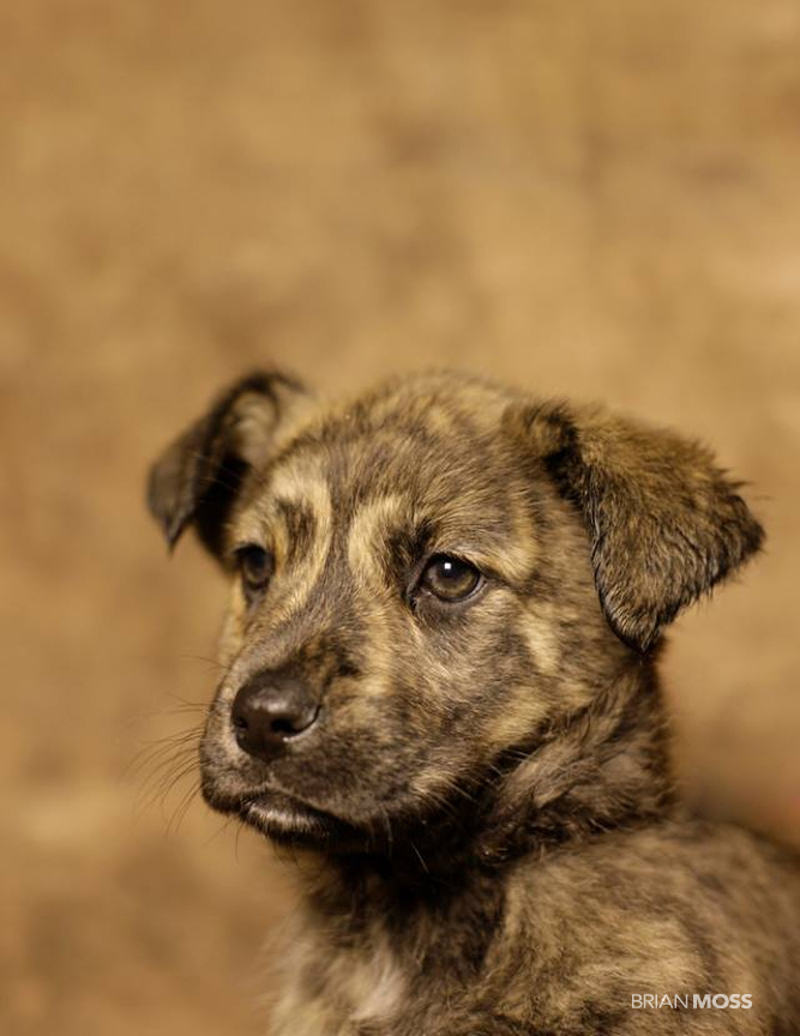 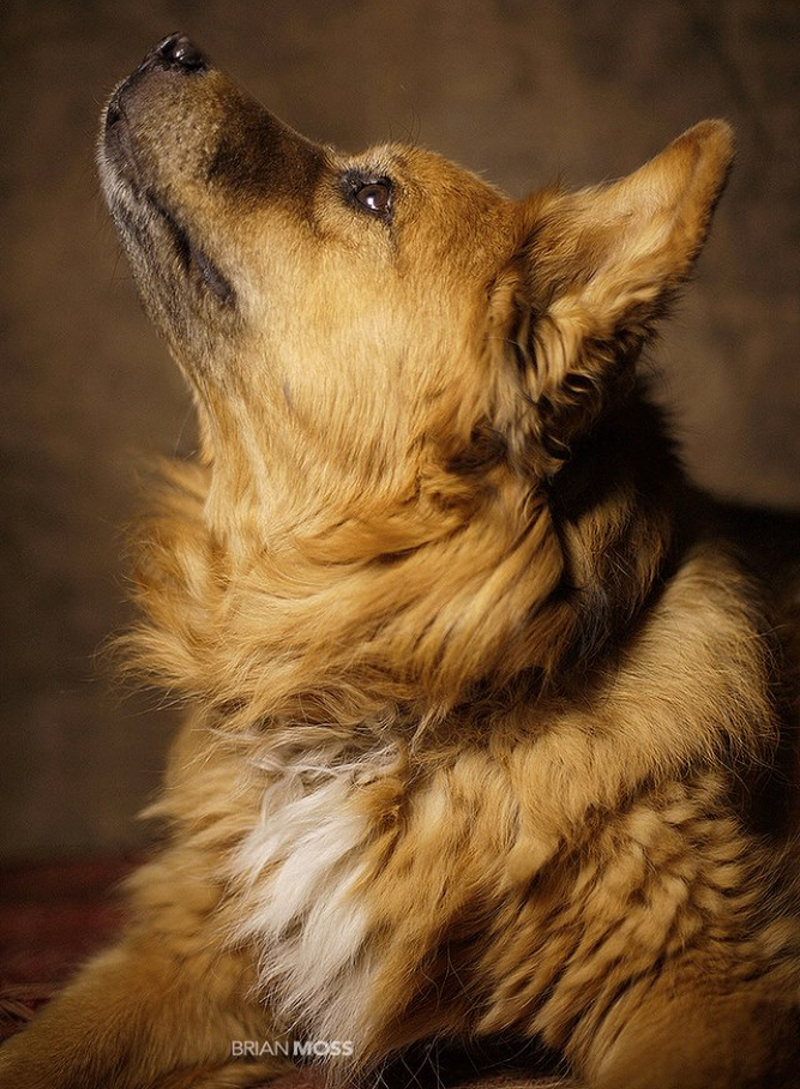 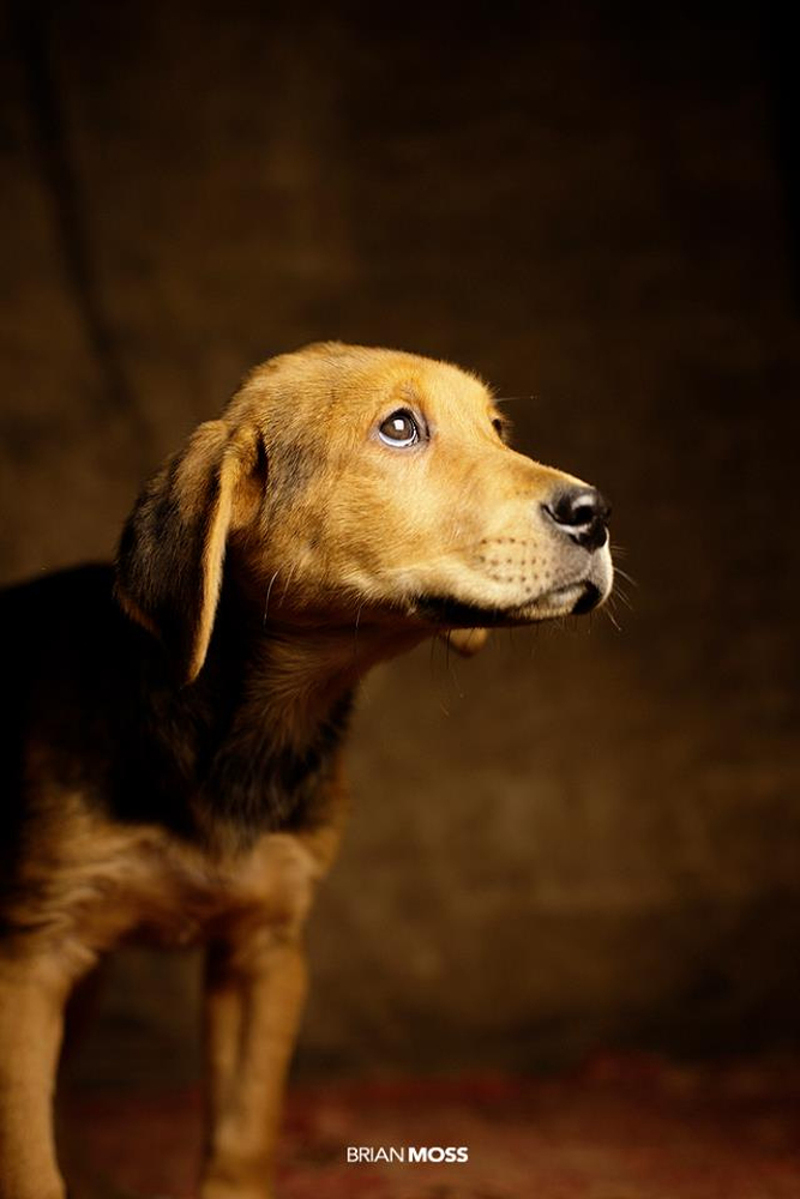 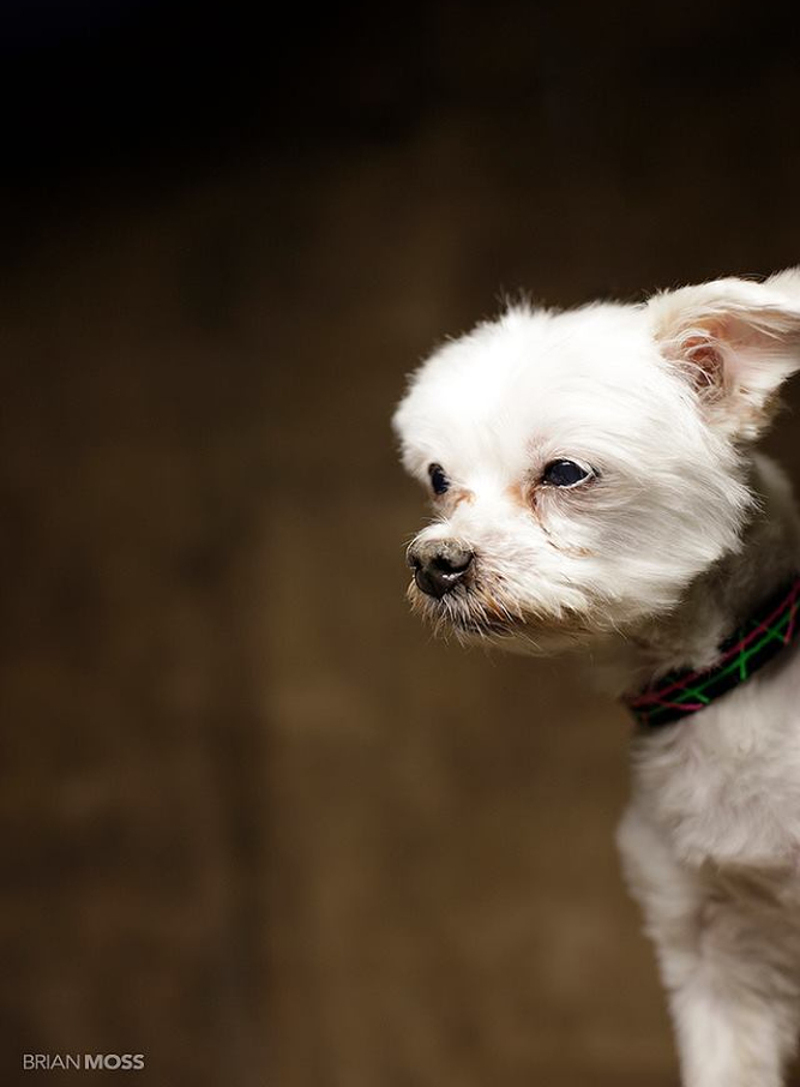 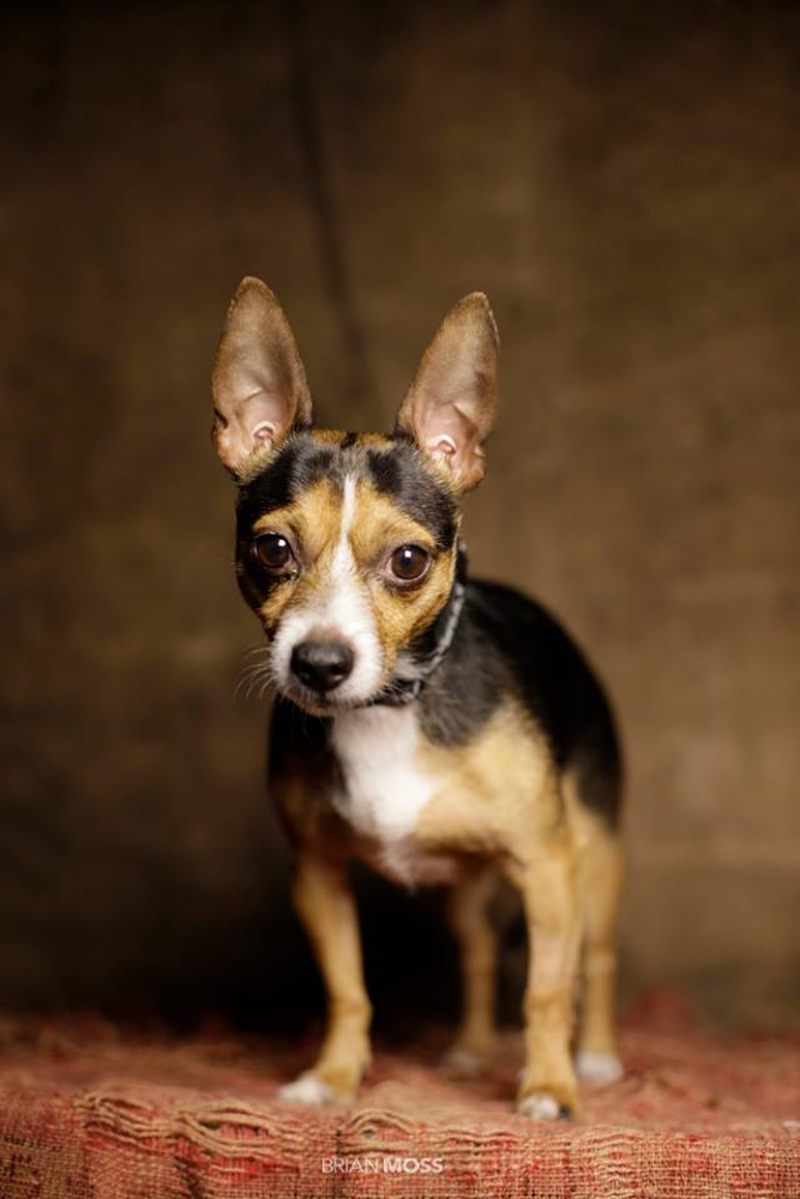