My Dog Is Cool…And Doesn’t Belong in a Hot Car! 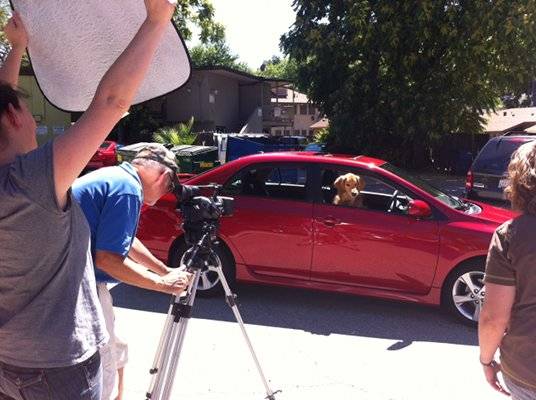 It’s that time of year again – when RedRover starts responding to a flood of stories about dogs – and sometimes other animals – left in hot cars.

Many people who love their dogs understandably want to bring them along wherever they go, but a lot of well-meaning pet owners don’t understand that dogs do not tolerate heat well because they can’t sweat. Dogs have to dissipate heat through panting or through the pads of their feet. If the surrounding temperature is too hot, and they have no access to water to help them cool off, the build-up of temperature will begin to cause cell damage, organ failure and eventually death.

A dog’s normal body temperature is between 101 to 102.5 degrees; a dog can only withstand a high body temperature for a short time before suffering nerve damage, heart problems, liver damage, brain damage and eventually death.

Leaving a dog in a hot car, even for “just a minute” to run into a store is gambling with a dog’s life.

VIDEO OF DOG SCRATCHING AT CAR WINDOW TO GET OUT

Summer has just begun and already at just one mall in Sacramento, California the mall security has responded to five reports of dogs in serious distress from being left in hot cars in the parking lot. Last year security cameras at Arden Fair Mall in Sacramento captured footage of a dog left in a hot car in the parking lot, desperately scratching at the window to get out. The dog’s owner drove away before security personnel could seize the dog, but RedRover was able to use the footage in an educational video about the dangers of leaving dogs in hot cars. Watch the video.

In early June of this year, a young golden retriever, Nexus, died after being left in a hot car while his family members were visiting a state park in Black Diamond, Washington. Although the dog was spotted by a passer-by in the evening and rushed to a veterinarian, his internal temperature had reached 108 degrees – too high for him to recover – and the dog passed away. The owner was charged with animal cruelty, a felony. Read the full article.

If you see a dog in distress in a hot car, call the local animal control agency, police or 911 right away. If possible, you can also try to find the dog’s owner. Signs an animal is in distress include:

At least 14 states and many municipalities have laws that specifically address the problem of animals left in cars in extreme temperatures. These laws often authorize law enforcement officials to enter a vehicle and remove the animal. Even states without these provisions may consider leaving an animal in an enclosed car to be animal cruelty.

HEAT STROKE! It might only be ten minutes … and the dog or cat will be near death. Find out more about what happens to dogs suffering from heat stroke … and how you can help!