How to Change the Way You Think About Animals 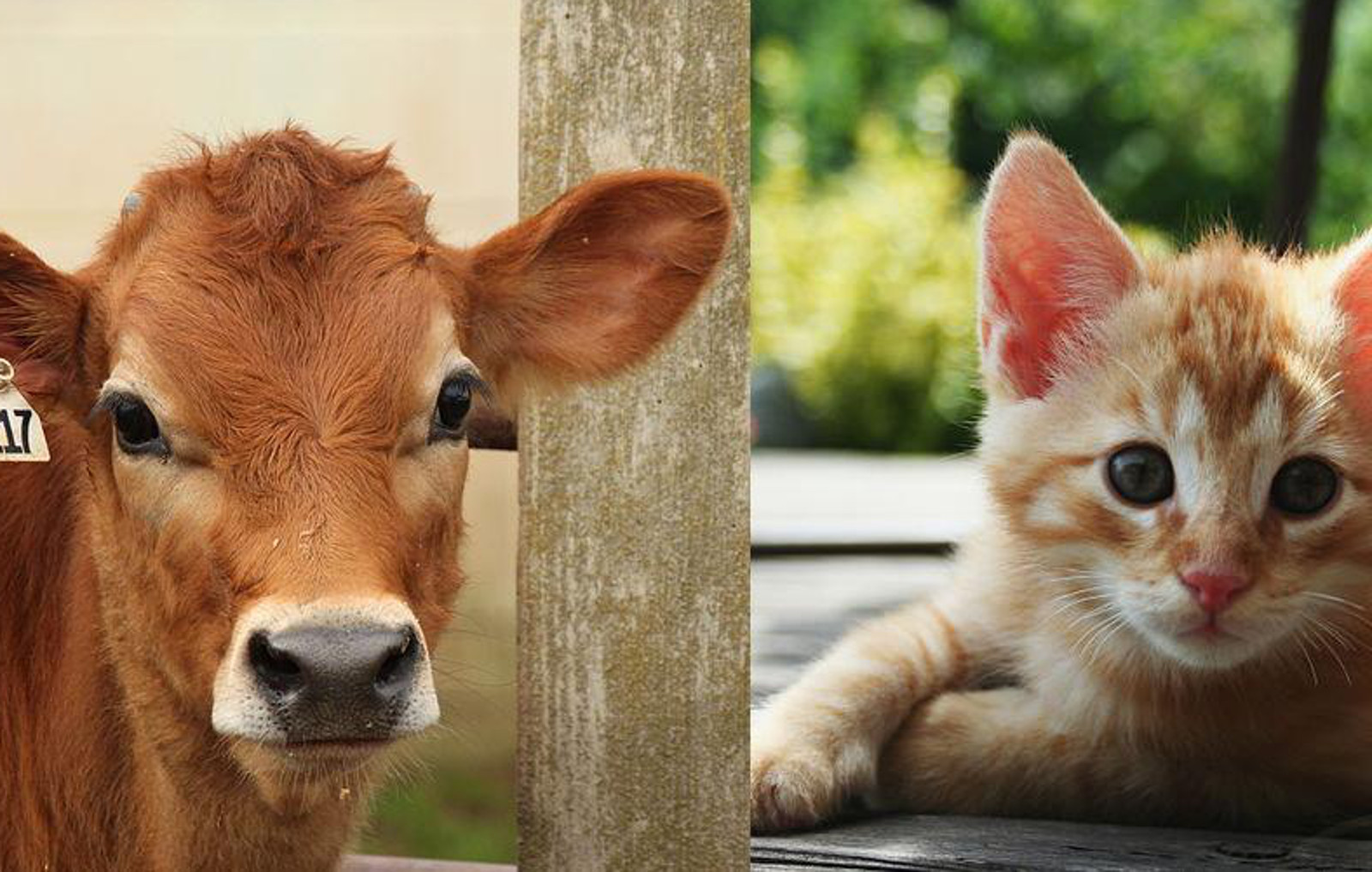 In my recent article “A Fox Is a Cow Is a Cat,” I touched upon how we reconcile our choice to treat some animals with respect, such as our own companion animals like dogs and cats, while we treat other animals with disdain and abuse, such as the pigs we eat and the cows we kill and skin for their leather. It came to generally positive reviews of recognizing that there’s something amiss about our moral cognitive dissonance towards other species. However, one dissenting comment, which was very common, approached the issue from a very different angle: 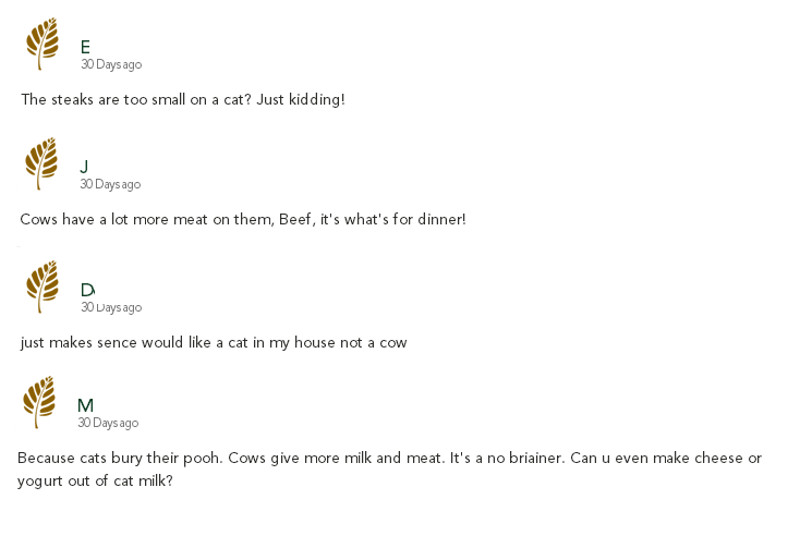 Soon, I found out that I was all wrong about why we slaughter cows, artificially impregnate them, take away their young, and treat them as a mere food source or commodity. Obviously, it’s because cows are just too darn big to be a household pet, right? And we don’t eat cats, because, well, making cat burgers just isn’t economical. Think about it: cats are tiny. Cows are big. I was astounded at how easily I had completely missed this sound omnivorous logic.

And maybe, just maybe, that would account for the ways we mistreat animals, except…

So many of these answers focused on explaining to me exactly why we – the human species – do not routinely kill or exploit cats. Unfortunately, for this argument to stand its own ground, it would have to be the case that we’re not killing and exploiting cats by the thousands.

Except we are: “Nearly 22,000 cats are abused in U.S. laboratories every year—in addition to the tens of thousands who are killed and sold to schools for cruel and crude classroom dissections.”

Laboratory cats regularly have holes drilled into their skulls, with steel implants positioned in their brains and eyes.  They are routinely restrained while scientists do anything from crushing or sewing their eyes shut to intentionally causing a heart attack.

Besides using cats for laboratory testing, according to the Humane Society, approximately 3-4 million cats and dogs are killed in shelters each year. Pet owners are excited to see “the miracle of birth” when they let their cats become pregnant or impregnate, but soon they can find no new home for the large litter and send them off to a kill shelter, where they wait to be adopted or euthanized.

Our cognitive dissonance that tells us to treat some animals better and others worse isn’t always species specific: we treat our house cats with a life of luxury while we let cats die in testing facilities and shelters.

So when someone says, “We don’t kill/exploit cats because we can’t eat them like we do cows!” I ask them to really check again and see if the truth fits their statement. Just because we don’t eat cats doesn’t mean we don’t give millions of them the opportunity to experience hell on Earth just for our own desires.

Check out some of the animal-free testing alternatives we’re already creating in order to give cats and other animals used in experimentation a better life, and remember to spay/neuter and adopt your pets instead of buying them from a store.

Once we come to see that such treatment is wrong when it happens to cats, we might also begin to see why it’s equally wrong for other animals, since…

Another major problem with the commentary I received was that it suggested since cows don’t fit nicely on your lap or on the foot of your bed, they deserve to be eaten, or to be turned into leather, or to be artificially impregnated again and again. My cat is with me here as I write this and he sure does seem happy to be cat-sized and able to sneak his way under my arm rather than cow sized. But just because he can fit here with me in my everyday life and a cow can’t, what does this mean? Does it mean that I should find some sort of use for the animal that I can’t be a companion to, something for them to do that benefits me?

We certainly don’t think this way with other humans. Imagine if we all said, “Well, if you’re not going to be my best friend, I guess you’ll have to be my indentured servant!” That’s just not how society works. Just because someone isn’t immediately giving you benefit, doesn’t mean we revoke their rights to live their own life as they see fit.

Some people can keep cows as companions, if they live out in the country or run an animal sanctuary. Some people will form those emotional bonds with a cow that you would form with your own companion. The difference between a cow and a cat is not that one is better at offering or feeling affection and happiness. Cows are emotionally deep creatures who can form intricate friendships and feel stress when they are separate from those friends. They quite literally jump for joy when given their freedom. The difference is not that one is useful for exploitation and the other is not, as I’ve noted above how we harm cats just as equally as we have cows.

The Real Difference Is…

… that we have simply been taught to award some animals with our compassion, and others with our cruelty. And we do this because we can, because it is easy, because we as humans believe that we are the ultimate species granted dominion by God or nature to do with everything we see as we so choose.

It’s not like we don’t have meat alternatives, it’s not like plant-based foods don’t offer adequate protein, or doesn’t have proteins with the complete essential amino acid profile (like hemp does). It’s not like we’re unable to create animal-free methods of testing in scientific research. It’s not like we cannot spay, neuter, and adopt our pets.

We are not obligated in any way to show such undue cruelty to animals, to continue to see them as our own commodities instead of co-inhabitants of the planet we call home. We do because it requires less effort to change our ways. We treat animals with disrespect because we are creatures of tradition who are sometimes so unwilling to change their behavior no matter how damaging it is to other animals, our own environment, our even ourselves through our health.

And while we are stubborn, we can also be brilliant: millions of human beings already take the steps towards a less “speciesist” lifestyle and ideology. About 2.5 percent of the U.S. population is estimated to be vegan already. Millions more express the desire to treat animals with better care and rights, acknowledging through protest and purchases that when we have alternatives to taking the life and livelihood of another animal, no matter which animal it is, we should always choose the alternatives.

The biggest way we can change our thinking concerning animals is acknowledging that some are exploited not in light of simply making the best “economic” choices, but because we’ve grown accustomed to it – and that is the weakest defense of cruelty that we could ever have.