Holding a Helpless, Injured Cow, I Survived the Second Earthquake in Nepal 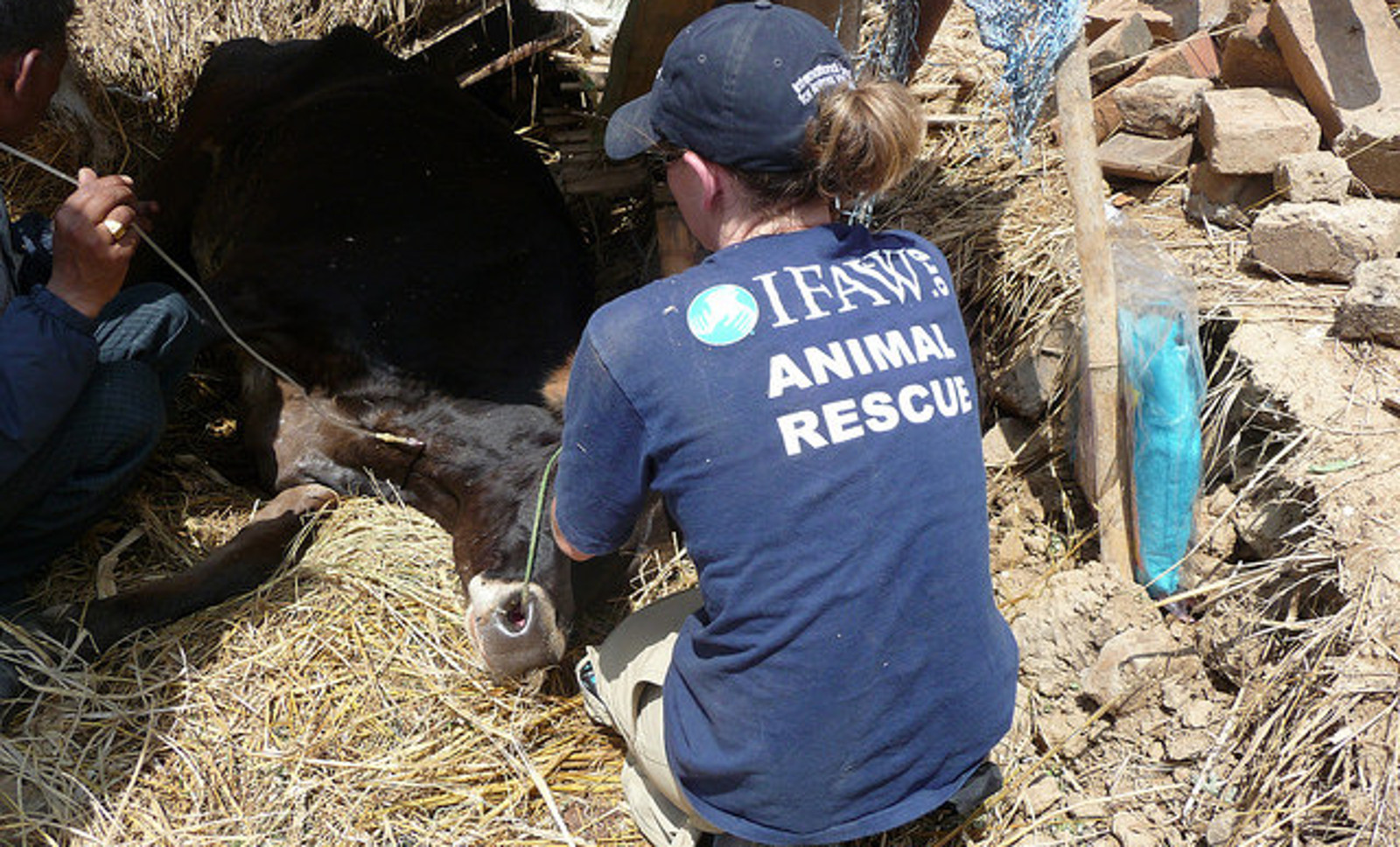 Animals can sense an earthquake before human beings. In Nepal that day, most people noticed the birds, as every winged creature in the area took to the sky in unison, calling out an eerie warning to those of us below.

For me, it was a much larger creature: a cow named Chameli. Her eyes had been partly closed moments before, as I had been using one of my hands to provide shade from the unforgiving sun.

Then, suddenly, her eyes were open wide in panic.

The shaking from that second earthquake was frightening enough. I shuddered when I thought that she may have been remembering that the same force of nature had put her in this position not so long ago.

Chameli is a cow like so many in Nepal after the April 25 earthquake: knocked down, buried, injured, and/or unable to stand on their own.

She was under her shelter when the first earthquake hit and became entombed in its rubble. After people cleared the debris, she was unable to get up, stand or walk.

Her owners used bamboo and pieces of tarp to create a makeshift shelter and brought her food and water daily.

When we arrived around 12:30 pm on May 12, we were told she had just given birth the day before despite her injuries. The villagers pulled the calf from the wounded mother and immediately took over caring for the healthy infant. 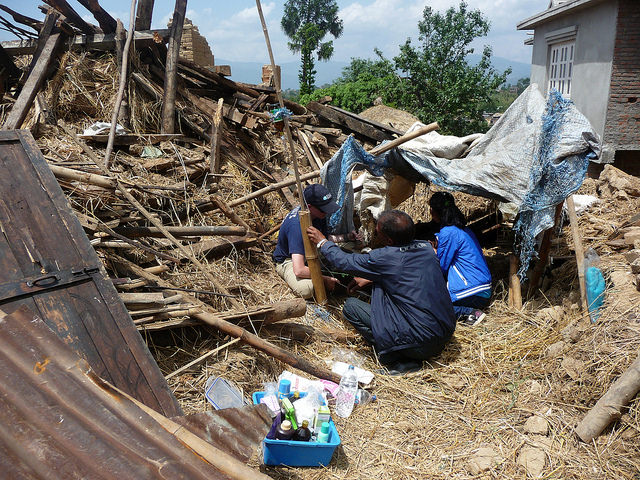 After an initial examination, no obvious fractures or serious injuries were found. The first course of action would be to give her calcium supplement through an IV, the quickest means of absorption and a critical initial treatment for “downed” cows.

Suddenly, as her eye grew wide with fear and the ground beneath our feet began to move in fluid-like motion, Chameli raised her head quickly. I placed my hand over the IV needle to keep it in place on her neck.

Within seconds, it became clear that this wasn’t a minor aftershock.

The ground bucked and shifted, and I leaned against a sturdy piece of bamboo to keep my balance, keeping one hand on her neck over the needle and the other arm attempting to steady her massive head. 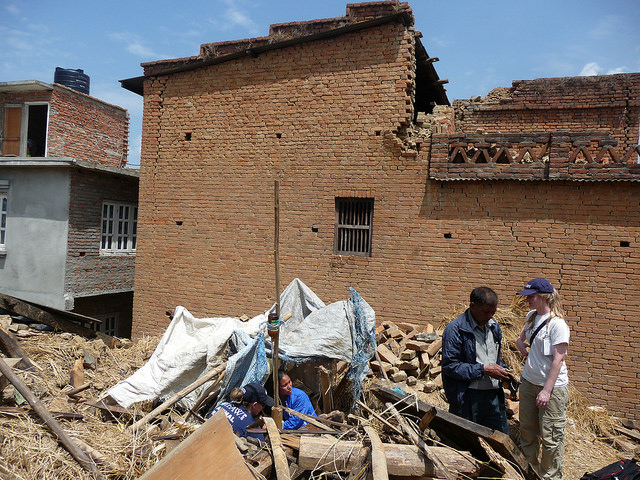 The already damaged building walls swayed like fabric instead of brick. The bamboo/tarp structure began to fall down on top of Chameli and me, eliminating my view. Through the earth’s growling and panicked shrieks, I heard warnings shouted from my teammates that bricks were falling.

I scrambled to remove the IV from Chameli, toss aside the tarp and seek safer ground.

It was difficult to know exactly when the Earth finally stilled as our legs continued to shake. The cries and screams of villagers filled the air, and our team rushed to those calling out for fear people and animals may have been trapped or injured.

Thankfully, no one in our immediate area was physically harmed; however, the emotional trauma felt by everyone who had lived through the even more powerful quake just over two weeks prior was clearly widespread and heartbreaking.

As the hysteria died down, we returned our focus to Chameli. 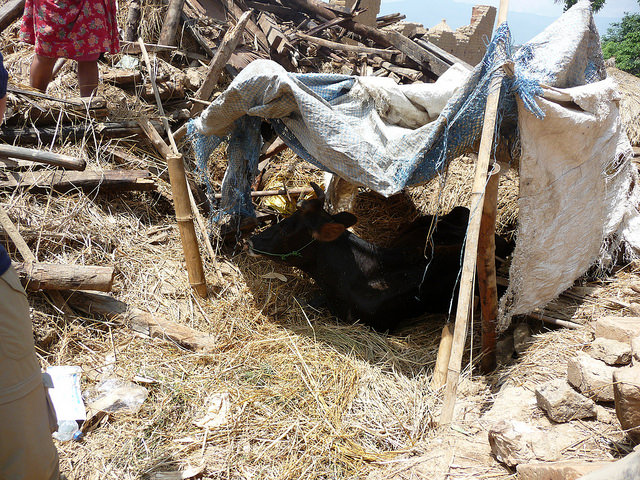 We dismantled the makeshift shelter and finished her calcium treatment. Aftershocks came and went as we cleaned and medicated the sores on her legs and belly and administered pain medication.

We gently shifted her side to side, replacing the soiled bedding underneath her with clean straw. We made one attempt to lift her to her feet, but it was quickly obvious that without more people, we could not do so.

The villagers originally curious about our presence would not return to the area for fear of the unstable walls surrounding us – an understandable reaction considering what they’d been through.

We used tarps and mosquito netting that we brought with us to create a new shelter around Chameli to provide protection from the sun and flies. At that moment, there was nothing more we could do.

Working with the local agricultural veterinarian, we ensured that she would receive follow-up treatment and assessment in the coming days. 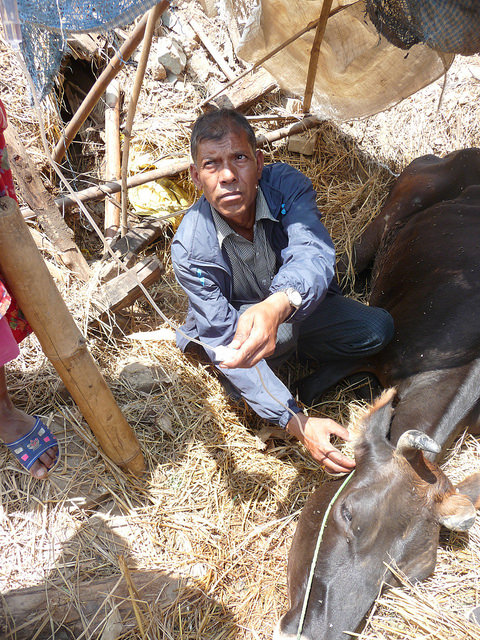 Driving back down from the village, people flocked to the streets and open spaces, we learned that we had experienced a 7.3 earthquake originating in a different region of Nepal than the one before.

It is devastating to know the challenges the people and animals of this country are now confronted with as they are only still picking up the pieces of the recent destruction. Even so, I am encouraged as I have witnessed in the past week the undeniable spirit and resilience of so many to cope in the face of despair and care for those around them, both human and animal.

It is clear International Fund for Animal Welfare (IFAW) and our local partners will continue to be needed in the coming weeks to assist the people and animals of Nepal following these two massive disasters.

It is the support from people like you that has already provided relief to so many, and for that I thank you.