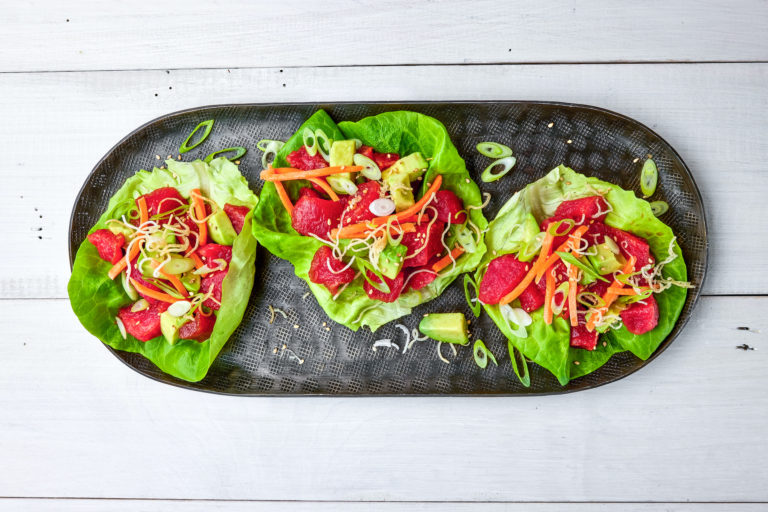 Vegans who miss seafood won’t have to wait much longer! Finless Foods, a California-based company, has become the first cell-cultured seafood company.

More than 32 million tons of fish are caught every year, which is more than the entire 320 million people U.S. population weighs. A study published in Nature Communications reported 200 countries are severely threatening fish populations.

Finless was founded with a mission to “create a future for seafood where the oceans thrive.” The company uses revolutionary technology to achieve a cruelty-free bluefin tuna.

“We work toward this every day by creating delicious, alternative seafood products that help you satisfy your cravings without bait or a hook. We are using ground-breaking (or rather ocean-breaking) plant and cell culture technology to revolutionize the way the world sources delicious and sustainable food. Good for us. Good for the ocean.”

The company’s next item on the to-do list is to finalize their 11,000 square foot facility to begin production on their Finless product. They plan to launch the plant-based tuna in the U.S. later this year.

The company’s headquarters is in northern California, and they plan to stay local with the company to reduce transportation and support local jobs. They plan to finish construction within the next few months.

The company will begin to sell its plant-based tuna this summer. Coincidentally, nearly 30 percent of tuna is consumed during the summer. It will be an easy switch for people to grab the healthy, cell-cultured tuna lookalike instead of the mercury-filled wild tuna. The company plans to price their product slightly cheaper than wild-caught tuna in hopes of achieving price parity. They expect it to be an instant competition for the tuna industry.

“In terms of availability, we are targeting fast-casual and chef-casual restaurants, (quick-service) poke restaurants, colleges and universities, hotels, supermarket prepared foods areas and many entertainment venues across the country,” Michael Selden, CEO, and co-founder told Forbes.

There are many advantages to both your diet and the planet for choosing this cell-cultured tuna instead. The plant-based tuna is healthy, sustainable, and gives you the same enjoyment and nutrition without any risk of mercury contaminants.

Research has shown that climate change and overfishing lead to an increased level of mercury in fish. 82 percent of mercury is consumed from fish, and 40 percent is from canned tuna. Climate change increases mercury by amplifying it to the top of food chains. Even aside from mercury, the way we are currently fishing is unsustainable and damaging our ecosystem. Overfishing happens every day and changes all factors in the fragile ocean ecosystem.

“We see wild-caught, farm-raised, plant-based and cell-cultured seafood as complementary—ways to diversify our consumer choices and palettes, as well as our seafood supply so that we can continue to enjoy the nutritious and craveable dishes that we love without placing further pressure on the health of our ocean,” she continued. “So whether it’s plant-based tuna on a Wednesday for lunch, wild-capture on Thursday for dinner and cell-cultured on Sunday, we’re here for all of it.”

There are plant-based options available now more than ever! Now is the time to make the change to a healthy and eco-friendly plant-based lifestyle.