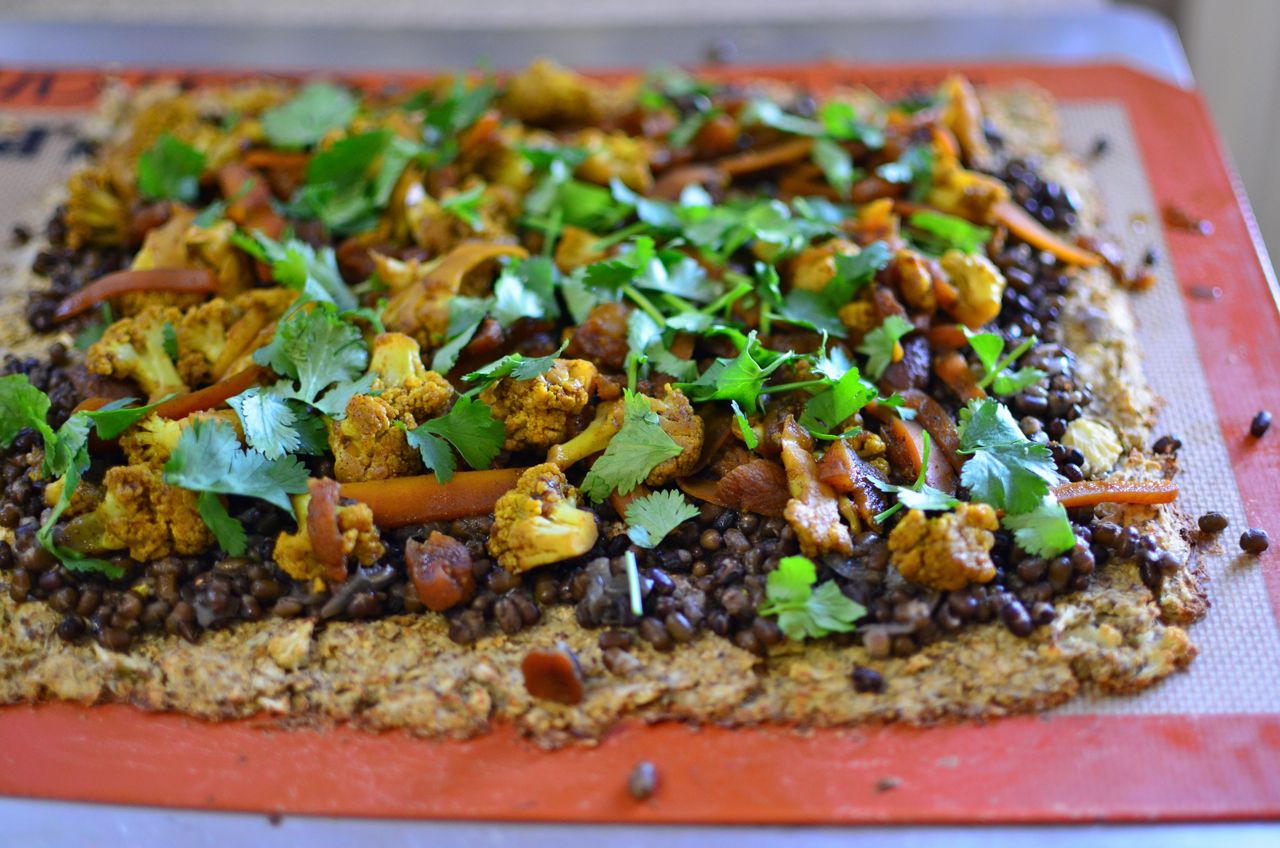 This year on my personal blog I feature a new color each month to highlight the beautiful rainbow of foods we have in the vegan diet. Cooking by Color has been so much fun and even had me trying new vegetables like kohlrabi for the first time. Last February we featured white! This pizza turned out to be one of the most popular recipes on my blog. What is the most beautiful white food you can think of? Cauliflower is unique and tasty but there are only so many things you can do with it. I bought one and then I pondered. What the heck can I make with this? Stir-fry, curry, roasted, as steaks, buffalo-style, pizza crust, as rice in sushi, as bulgur in tabouli. You see cauliflower in a lot of traditional Indian dishes so I ended up going with a cauliflower pizza crust with a delicious mung bean and cauliflower curry topping. Cauliflower pizza crusts were all the rage on the blogsphere last year and as usual I am late to the party! This recipe has many parts and takes a bit more time than the average pizza crust. But believe me, it's worth it. This has got to be one of the tastiest recipes I've made in a long time. I couldn't stop eating the crust just by itself (bottom right image is hiding the huge chunk I took out, which continued to grow and resulted in me cutting 3 inches off the side of the pizza LOL!). So I got the idea for a cauli pizza crust from Happy Go Lucky and Veggie Fixation. I kept mine pretty simple, but the addition of minced ginger was phenomenal! Word to the wise, use a food processor to chop the cauliflower. I grated mine and it was a pain and took forever. As I did the grating the large florets that fell off ended up going into the topping (as seen in the top right photo). Don't forget to save some cauliflower for the topping! Now onto the topping of the pizza. I'm a big fan of Indian food and as you can see from the Indian pizza in my cookbook, Blissful Bites, figured it would be a good idea for this cauliflower crust. I took a look in my pantry and low and behold I had black mung beans! Boy was I excited to feature this beautiful black legume. Have you tried them before? You are welcome to use the usual green mung beans if you can't find black. Chef Notes: * This recipe has many steps so you are welcome to used canned mung beans or lentils to save time or skip them all together. * The crust is gluten free. It doesn't hold together like a dough crust does so eat it with a fork. If you are not gluten-free you can change the almond meal to wheat flour to get a more solid, traditional crust.

Christy Morgan has been tantalizing taste buds for years as a vegan chef, cooking instructor, food writer, and cookbook author. Her mission is to show that a whole foods vegan diet can be delicious, easy and will bring more energy and bliss into your life! Christy became obsessed with fitness post-30 and is now a NASM certified personal trainer and yoga teacher spreading the message that you can be strong & thrive on a plant-based diet. She is the author of Blissful Bites: Plant-based Meals That Nourish Mind, Body, and Planet and the founder and creator of Blissed Out Retreats. She can show you how to reach all your health and fitness goals to reach optimal health! Check out her blog Blissful & Fit Chef!