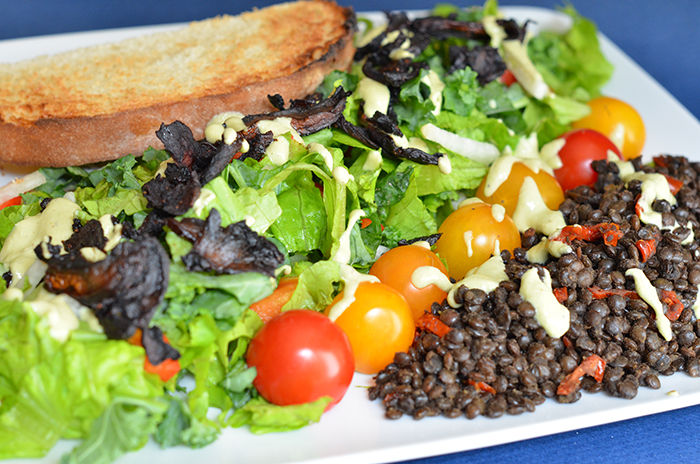 I’m willing to bet that beans and kale aren’t the first ingredients that spring to mind when you just read the title of this post. But why not? This version uses beluga lentils (B-L) and sun-dried tomatoes, all on top of baby kale and piled high with portobello bacon. To tempt you even more, this recipe uses my super-secret salad dressing base that has no oil and can be adapted gazillion ways. For example, for a Mexican version, add lime juice and a chipotle in adobo to the cashew, garlic, and broth base. Do the same with Harissa paste for zippy version. The list is endless. Besides using it as a salad dressing, you can also use it as a sauce. Let’s start with that dressing, because even if you never make the salad, it’s worthwhile to have to have this recipe in your toolbox. Boiling the cashews softens them, making it easier to blend them, but eliminating a long soaking period.

Super-Secret Salad Dressing (Chive Version) Yield: 1/2 cup dressing Tips: Think of this as a blueprint. This recipe is ripe for adapting. For example, proceed as above but omit the chives, shallot, and celery salt. Use onion and herbs of choice instead. Try using red wine vinegar (or other) instead of the apple cider vinegar. Add sriracha, ginger, and a touch of peanut butter. And so on! BLT Salad

Tami Noyes lives and cooks in the Midwest. Currently working on her second book, Tami is the author of American Vegan Kitchen. Starting out as a baker for a local vegetarian café in the early ‘80s, Tami’s love of cooking is her way of expressing her compassion and nurturing for all beings and our planet. She believes that sharing the fantastic flavors of wonderful vegan foods is best way to encourage others toward veganism.