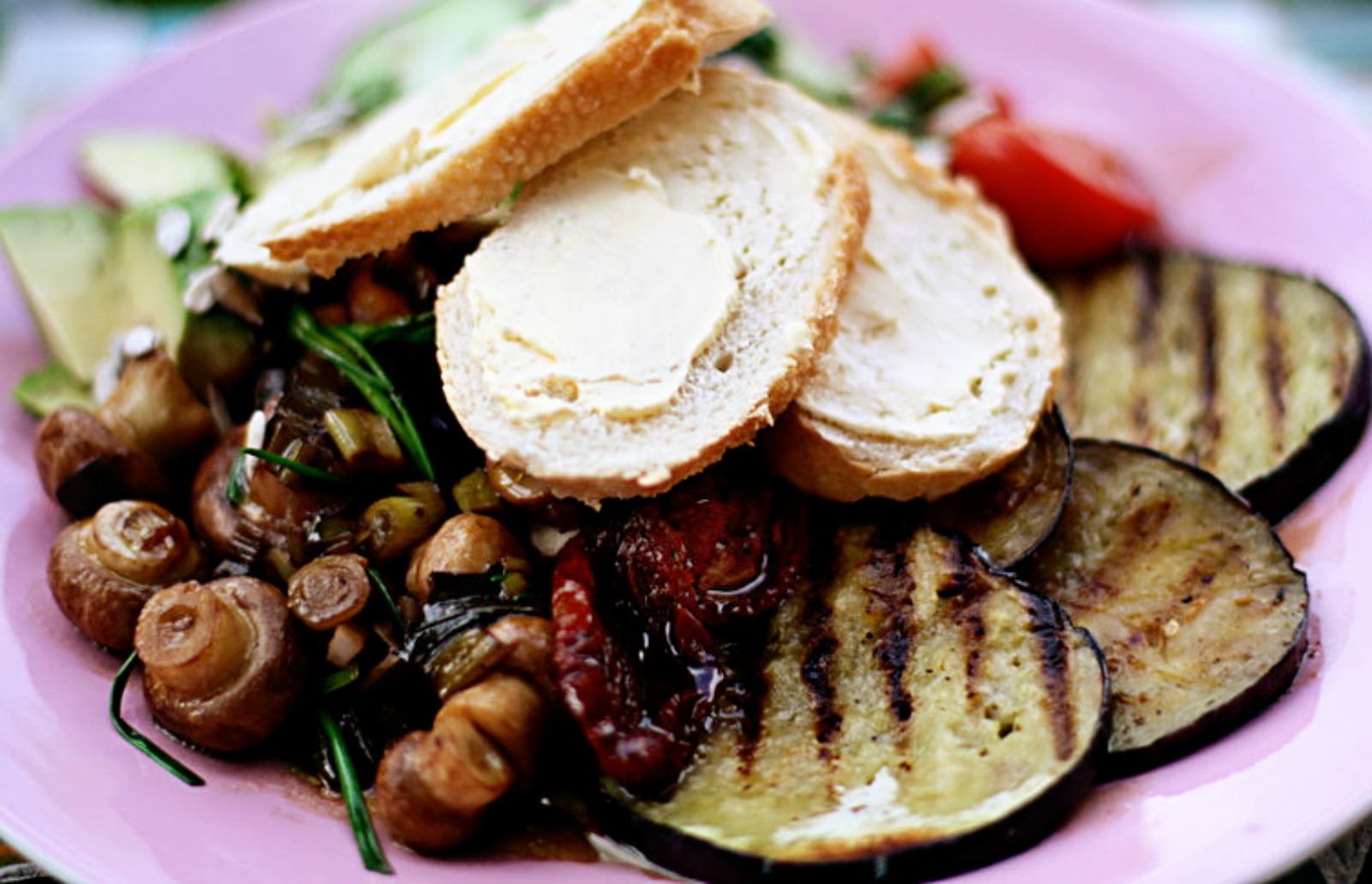 I’ve long longed after tapas, even just the idea of them,  though truthfully,  I only half understood what the term meant til not long ago. They are Spanish, yes. Some kind of appetizer? A meal consisting of appetizers? Something that goes well with early evening cocktails or late night drinks. Okay, so they’e all the rage, and until finding myself in Andalusia, flipping between rural countryside villages and cities, I had no idea what the whole thing was about. 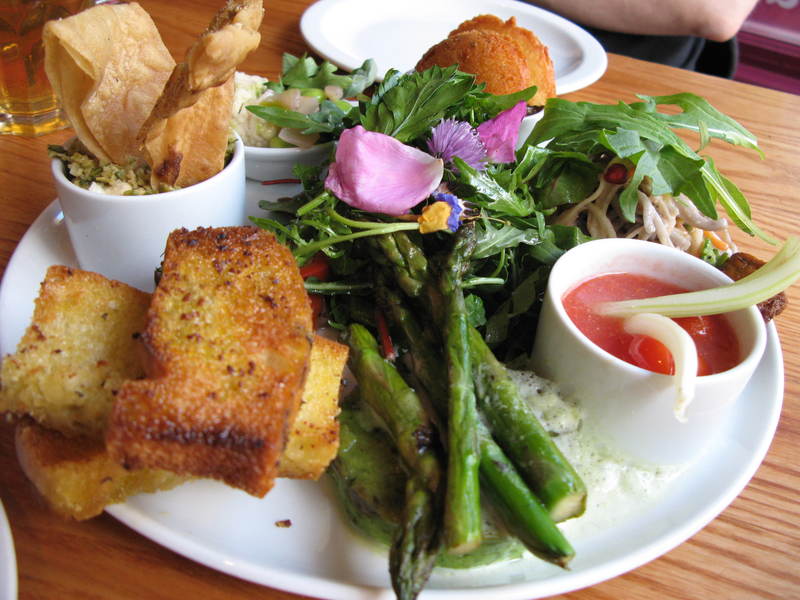 
I’m going to assume I am not the only one who was formerly uniformed, and will kindly inform those on similarly less hip planes of existence. Tapas are essentially finger foods, usually served (and expected) as snacks at bars, and they can range from rather fancy compilations of fine ingredients to a toothpick of olives, a la extra olives in a martini. Or, in more familiar terms for my bowling circle, the culturally distinct bowl of nuts that comes beside a beer.

Near to Granada, pub patrons actually will be given one free tapa for every drink, and in other locations, they will pay a couple of euro to enjoy tapas of their own choosing. Of course, Spain being Spain, and the world being the world, most authentic tapas are not intrinsically vegan, but that’s not to say that plant-based plates are completely off the table. 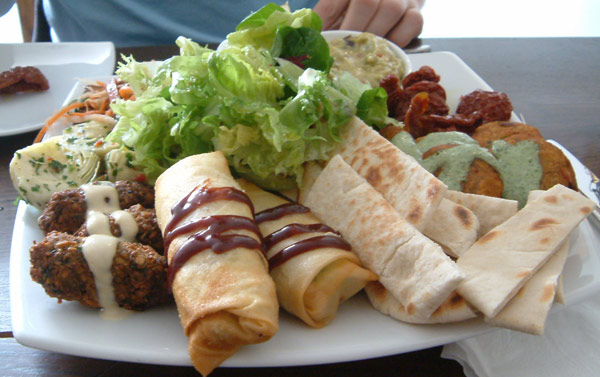 Unless you happen to be lucky enough to visit a vegan restaurant, most likely the tapas at a restaurant will include either fatty meats, cheeses, some have fish, and others have dairy-based sauces or even eggs. So what’s a vegan to do looking for something healthy, veg-friendly, yet still tasty tapas? 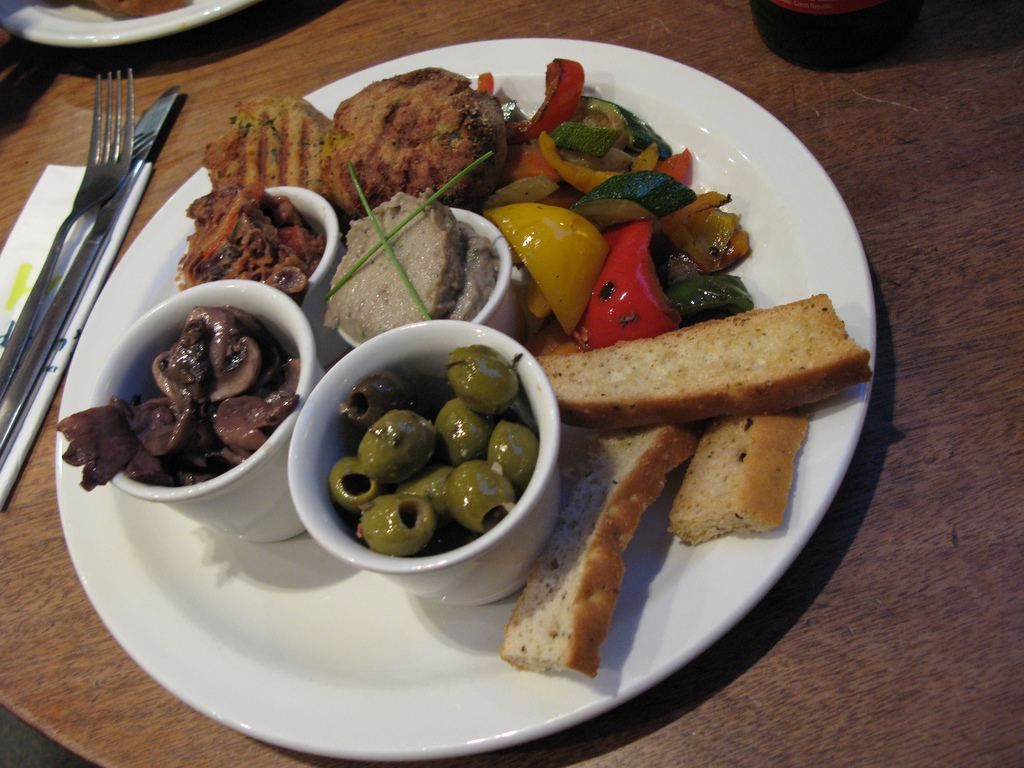 Below are some options for those vegans looking for plant-based options. And even for those not in sunny España to enjoy them in situ, you can easily take these ideas below and make them at home. Or, ask your waiter for them when you go out to eat. If you hit up some places like Mexican restaurants, you can even creatively design your own with a  little ordering creativity and pick and choose your own plant-based options. The tapa possibilities are endless!

Plus, tapas are the perfect excuse for a socially enlightened party with some fine, animal-friendly Spanish wines, so let’s see what we’re gonna eat too. Shall we? 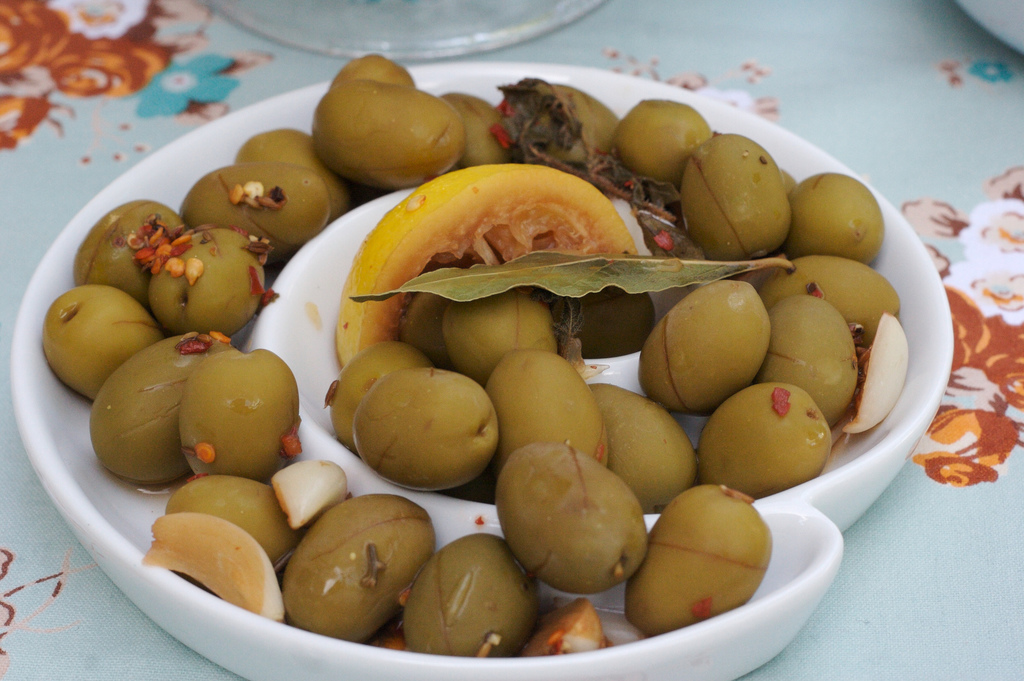 Nothing says Spain like olives. Not only are they grown there, olives are eaten in all sorts of delightful variations, with one of the most popular being marinated with scallions, oregano, paprika, and garlic in a mixture of extra virgin olive oil and red wine vinegar. Simple to make and awesome to munch. 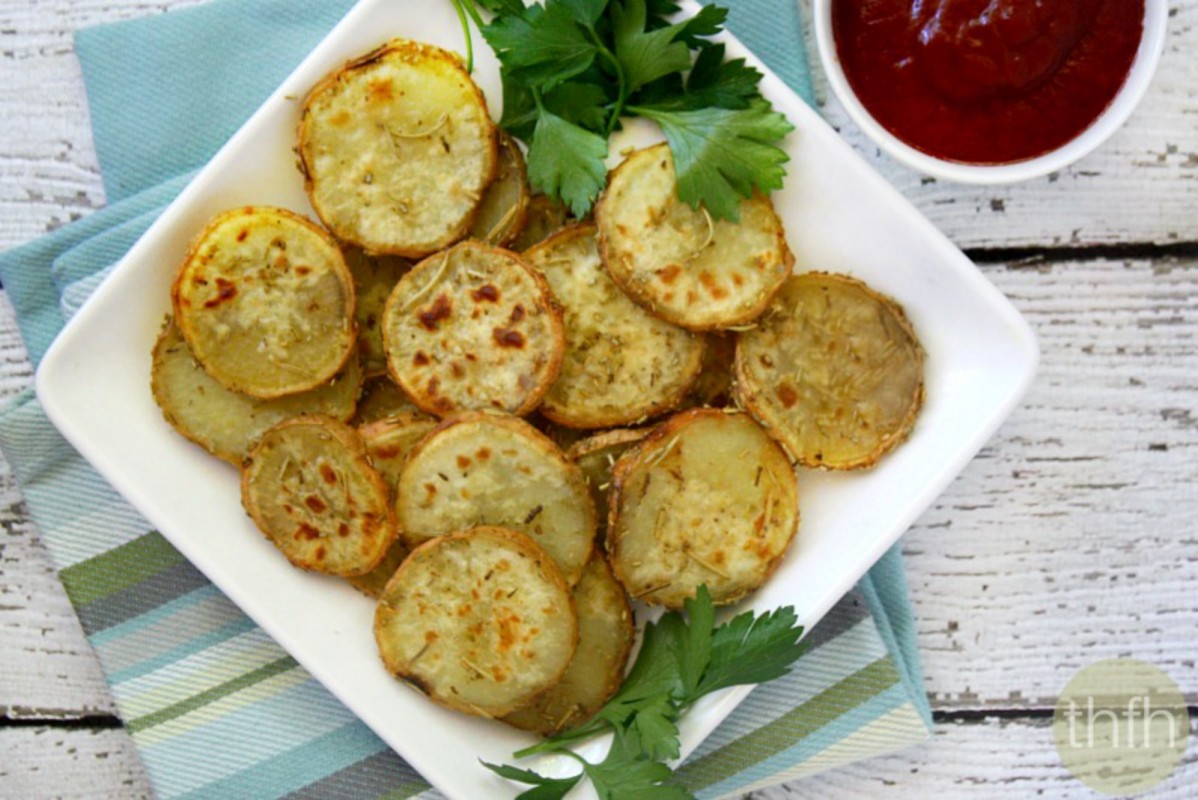 Potato chips are one way to go with finger foods, but patatas brava is dialing it up a few notches and transporting visitors to the outdoor café tables of Spain. Essentially though, it’s fried potatoes with a little Tabasco kick, tomato sauce, and Dijon mustard. And, they are a classic. You can also make Rosemary and Garlic Sweet Potato Medallions for tapas at home, for a flavorful addition, and healthy cooking method. 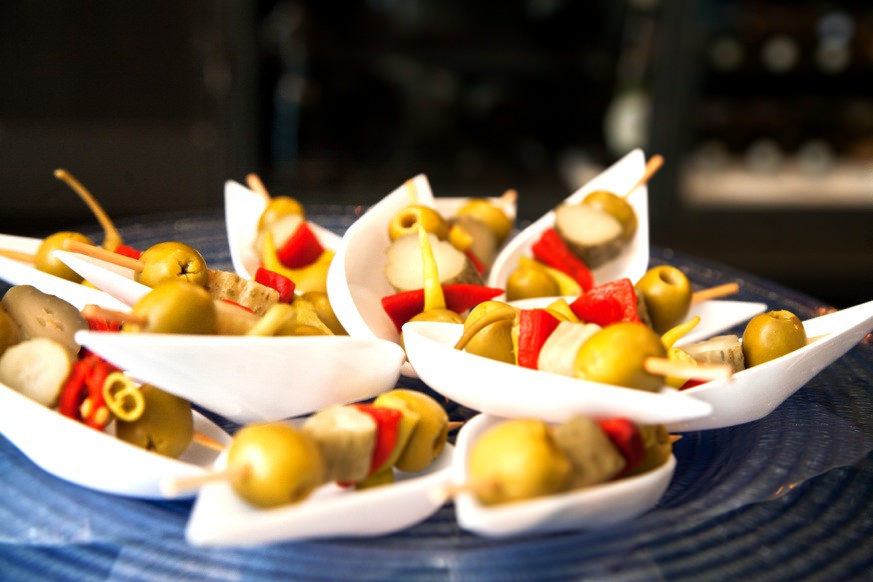 The name is derived (unfortunately) from the darts used in bullfighting (a tradition fast fading), but these snacks are as simple as it comes: Pickles on a toothpick. Get an assortment of choices — onions, gherkins, pimento stuffed olives, peppers and artichoke hearts — and skewer them together. Asi! 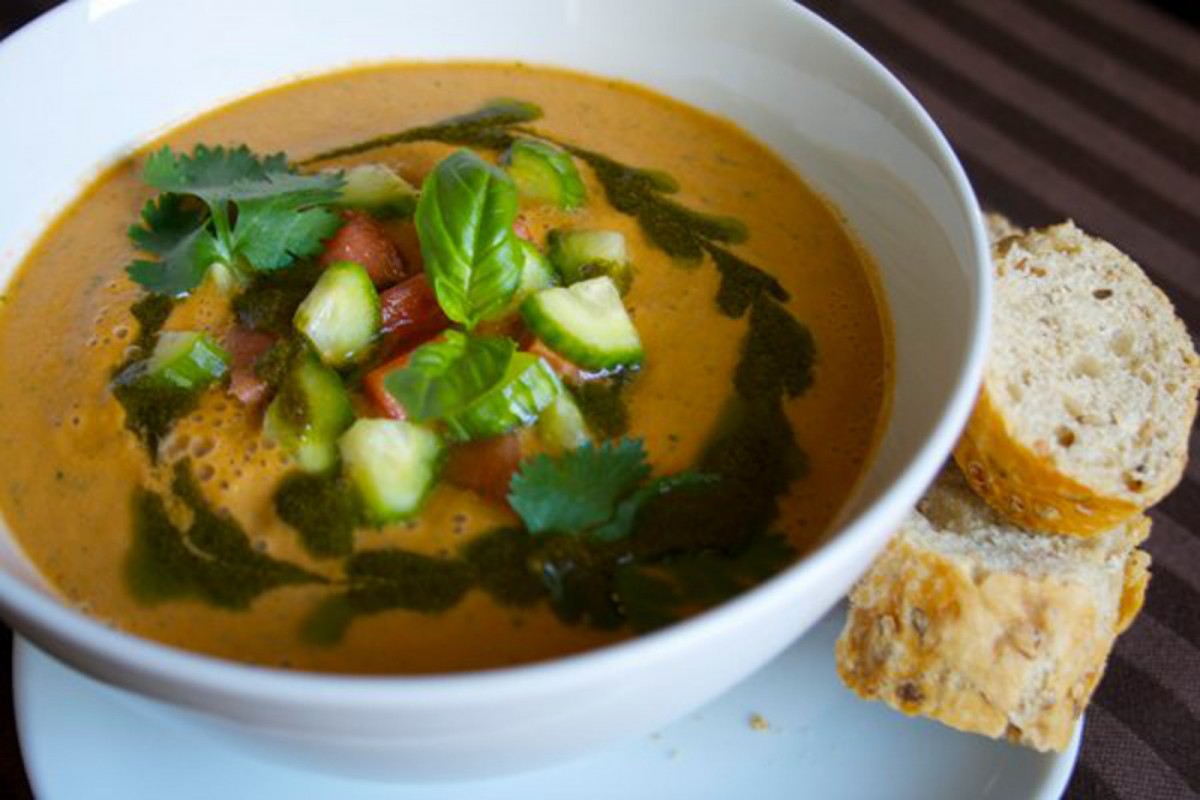 This may be the outright most familiar of the traditional tapas, or maybe it was just because my home ec class made it, but gazpacho is yet another fast and easy flavor for the menu (and it adds raw food as well!). It’s just a cold tomato soup with raw summer vegetables thrown into the mix. Blend them up raw. Done. 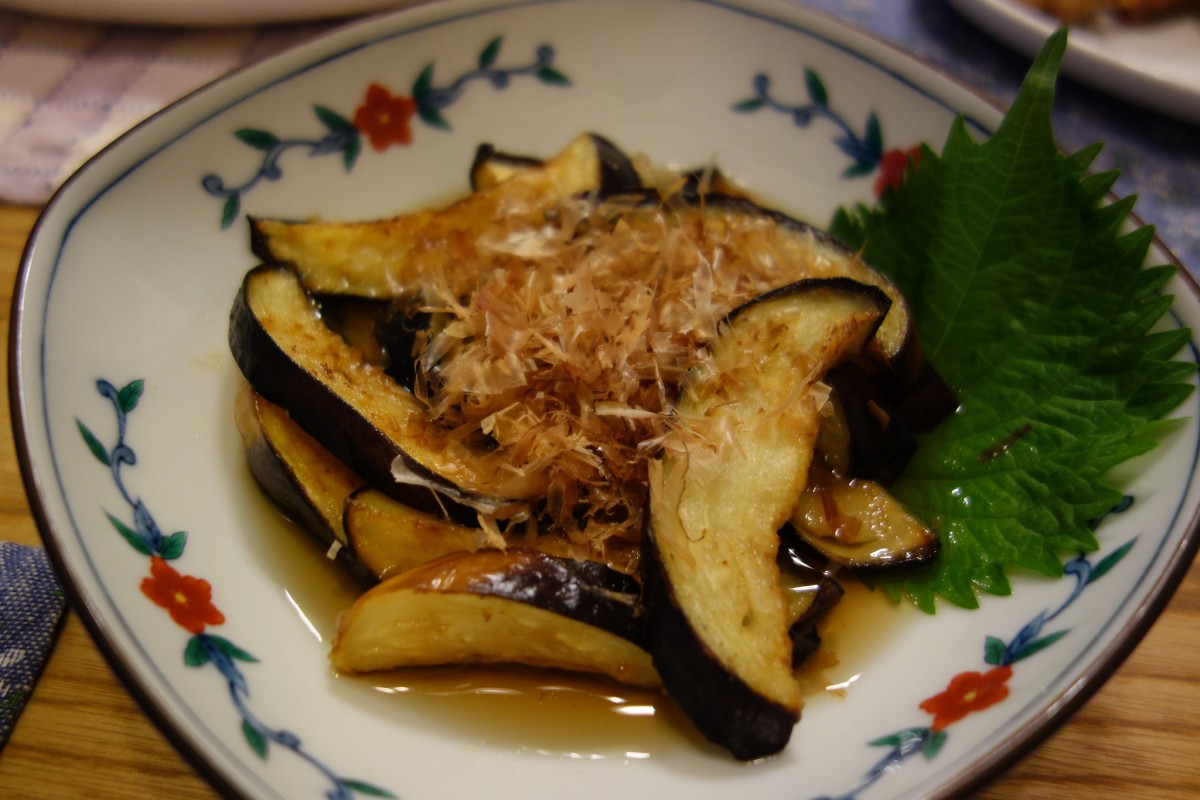 A sweet take on more summer vegetables. And, we all love a little something fried in our finger foods. For this one, it’s a simple as thinly sliced eggplant medallions, salted and pan-fried, ultimately topped off with either pure cane syrup, molasses or honey (if you swing that way). You can also try some of our Roasted Eggplant Slices with Tahini Cumin Sauce, or go for Baked Eggplant Fries as another option. 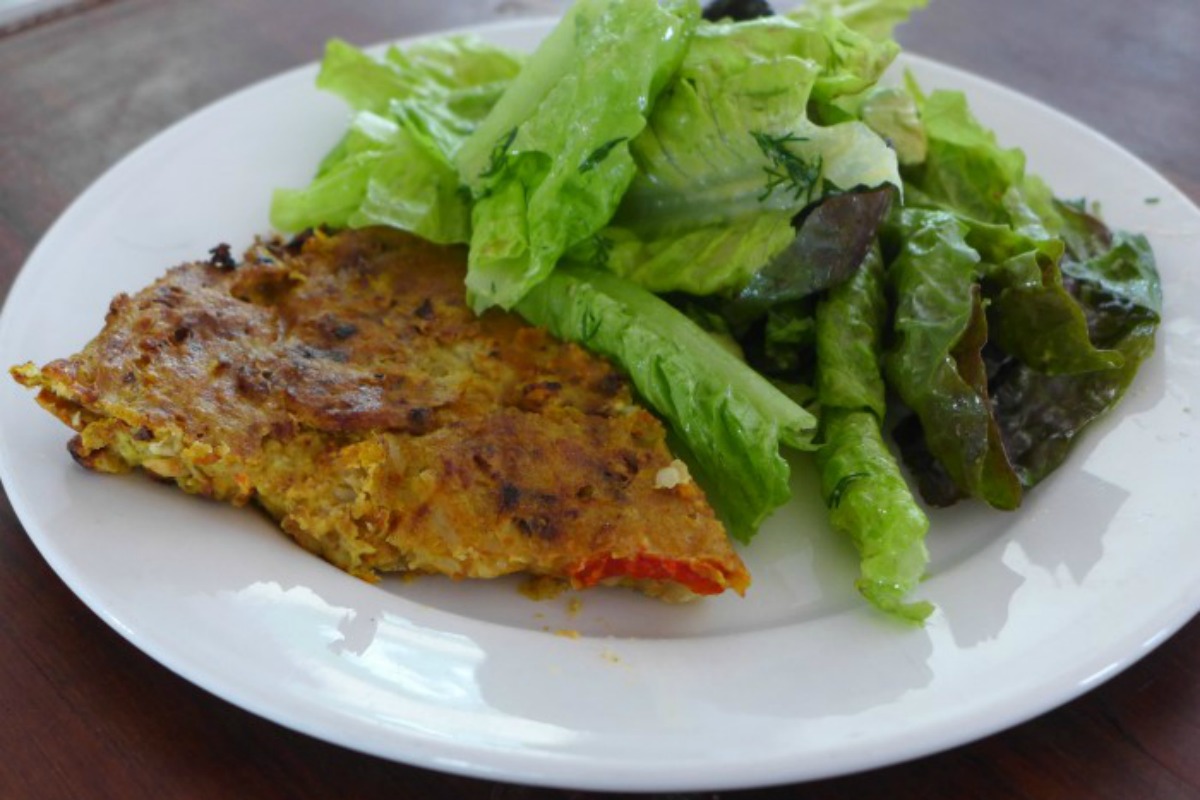 Eggs are huge in Spain, and the frittata — basically a baked omelet — is the way to go. So, of course, as a plant-based eaters, this is one that we’d have to forego in Spain, but at home, it’s entirely possible and worth, nay vital to, including for the authentic tapas party. Try this Roasted Vegetable Frittata and you’ll never miss the egg-based versions again. 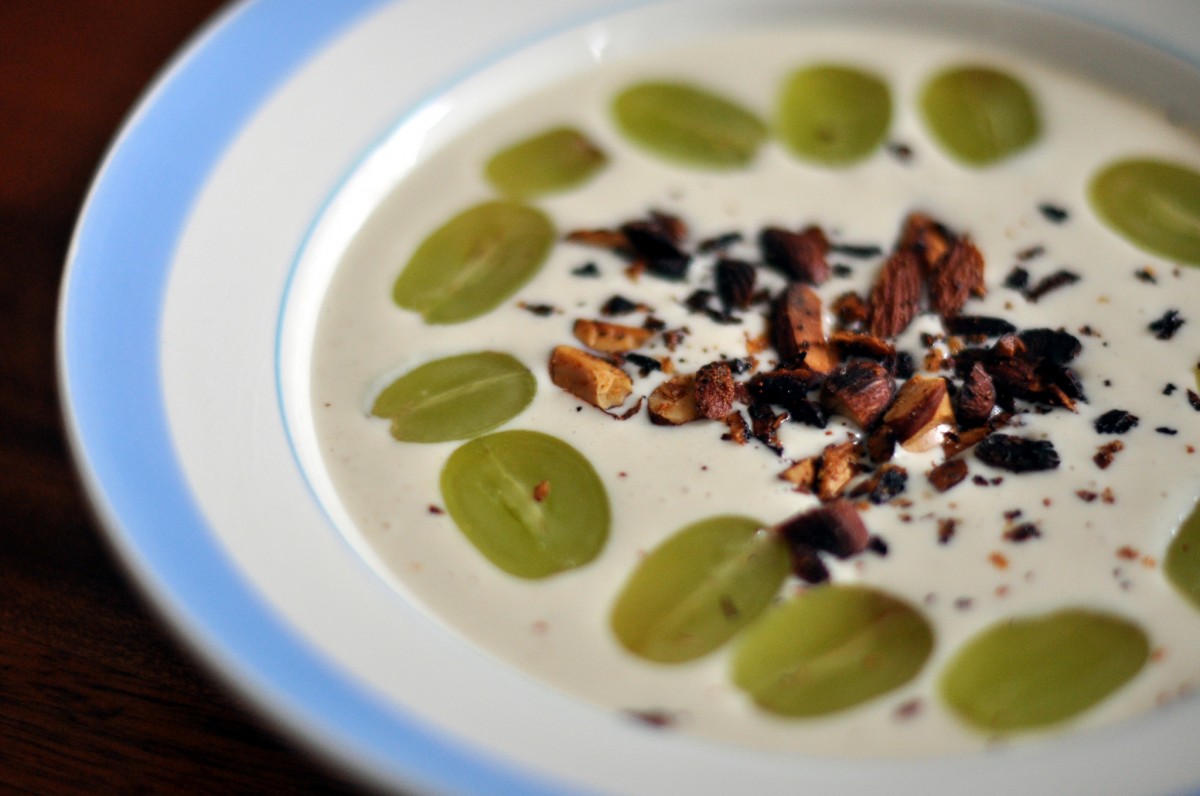 Another soup for the sampling, ajo blanco is lesser known than gazpacho, but it brings something refreshingly different to the typical soup: almonds. In fact, it brings a other unlikely things, like bread actually blended into the soup and grapes served on the side. This one begs for conversation. 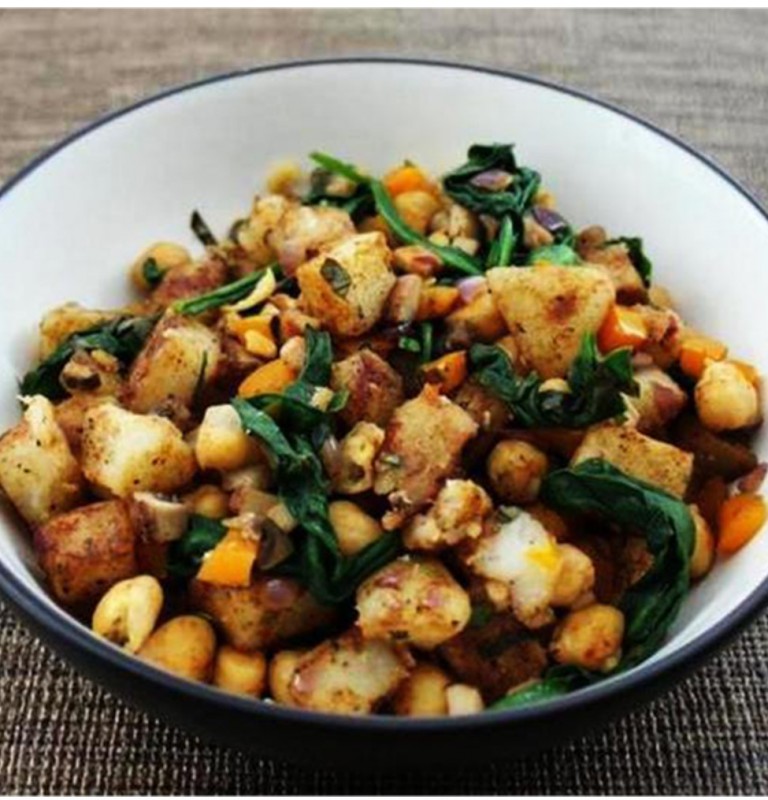 Then, of course, there are familiar combinations that are timeless, tasteful and terrific. How many cultures have figured out the delicious pairing of spinach and chickpeas? And, what a welcomed punch of protein it is for the plant-based tapa party.

Hey, these are just eight traditional and beloved specimens for the Spanish. That’s not to say that we can’t play with the term tapas ourselves and enjoy our own version of tapas. Other options include crusty breads (top with vegan butter or vegan cheese), or a variety of hummus options or dips of all kinds. The point is we need to be eating more finger foods with our drinks!