How to Make Risotto 5 Different Ways 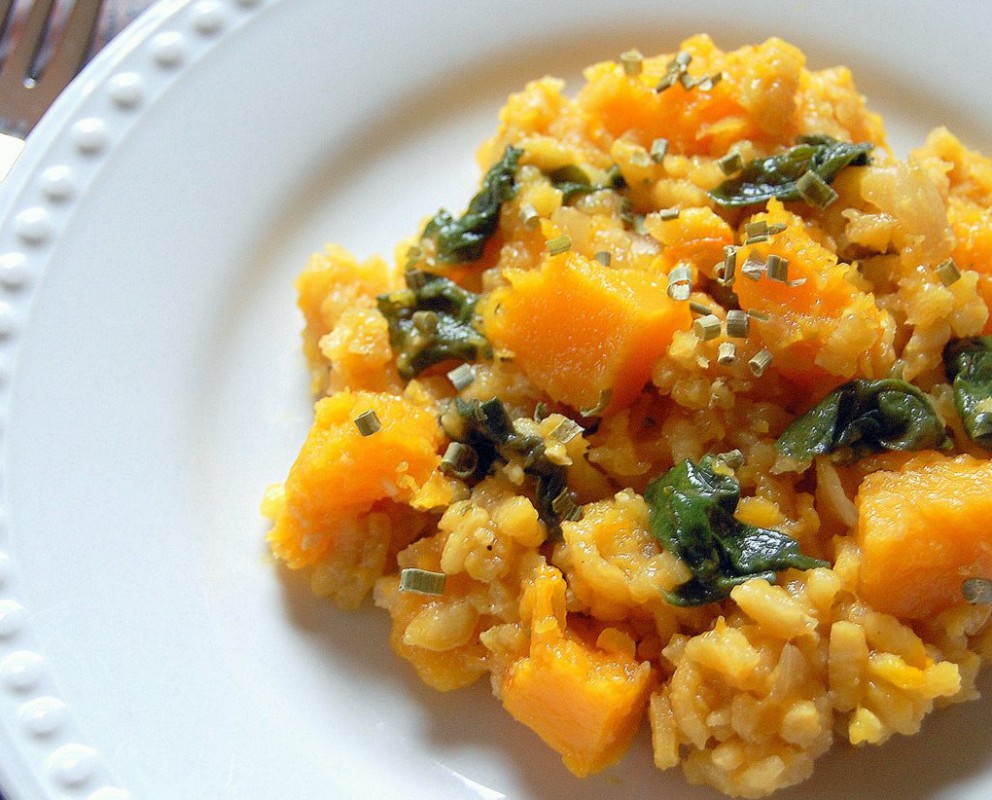 When you think about risotto, you probably think of a dish served in a fancy restaurant. I, myself, think of the dish that everyone has trouble perfecting on every single television cooking competition. Usually, they fail because they attempt to make this dish that normally takes a long time to prepare in a fraction of the time. Risotto is an Italian dish where Arborio rice is cooked in broth until it is creamy. Usually, the dish is cooked with butter, wine, onion and different types of broth. Risotto is comfort food personified. We already know that we can make risotto with different vegetables – caramelized onions, greens, mushrooms – whatever we like. But let’s take that creativity a step further. Let’s try different kinds of rice or let’s not use rice at all. Let’s try other grains or skip the grains altogether. Let’s choose not to stand at the stove and stir for twenty minutes. Let’s break all the rules! Read on and see how to make risotto 5 very different ways! 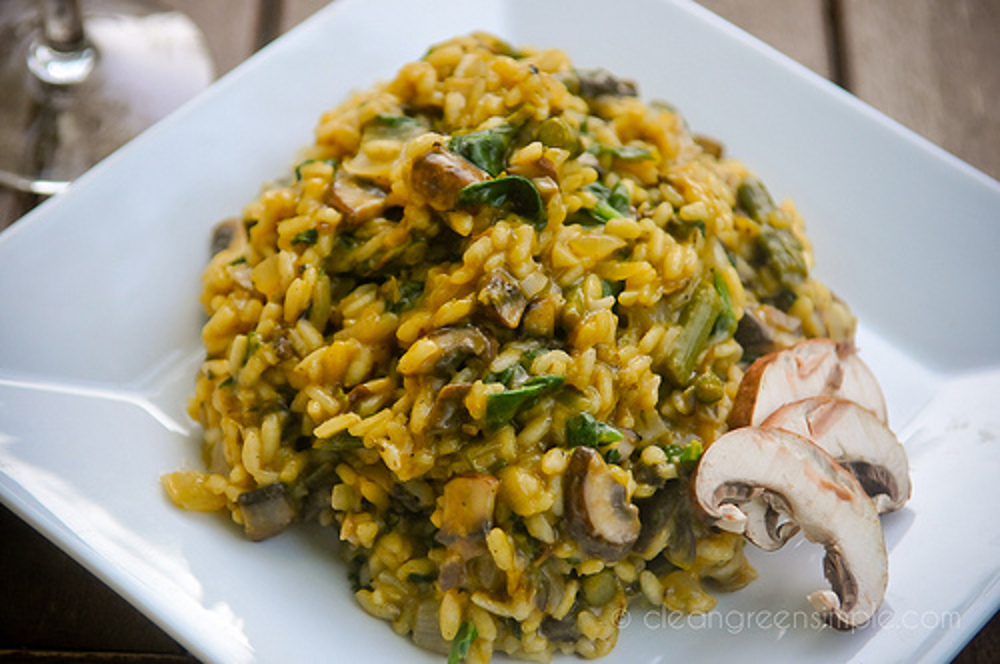 Before we get into all the variations on risotto, let’s see how to make a traditional risotto. This is a simple recipe for Mushroom Risotto: in a large pot, add 2 Tbs. vegan butter and cook over medium heat. Add 8 oz. sliced mushrooms and cook until browned, about 6 minutes. Transfer the mushrooms to a plate and set aside. In a medium saucepan, bring 6 cups of vegetable broth to a simmer. Add 1 Tbs. oil to the large pot and add 1 chopped onion and cook for 5 minutes until softened. Add 1 ½ cups Arborio rice and stir until the rice becomes opaque, about 3 minutes. Pour in ½ cup white wine and ½ tsp. kosher salt. Cook, stirring often, until the wine is absorbed. Add in ½ cup of the simmering broth and cook, stirring, until it has been absorbed. Continue cooking the rice, adding broth, ½ cup at a time, and allowing the rice to absorb it before adding the next ½ cup of broth. Continue cooking this way until the rice is tender and creamy, about 20-25 minutes. You may not need to use all the broth. Stir the mushrooms back into the rice along with ¼ cup vegan grated parmesan or nutritional yeast. Add in 2 Tbs. fresh chopped parsley. Serve immediately. 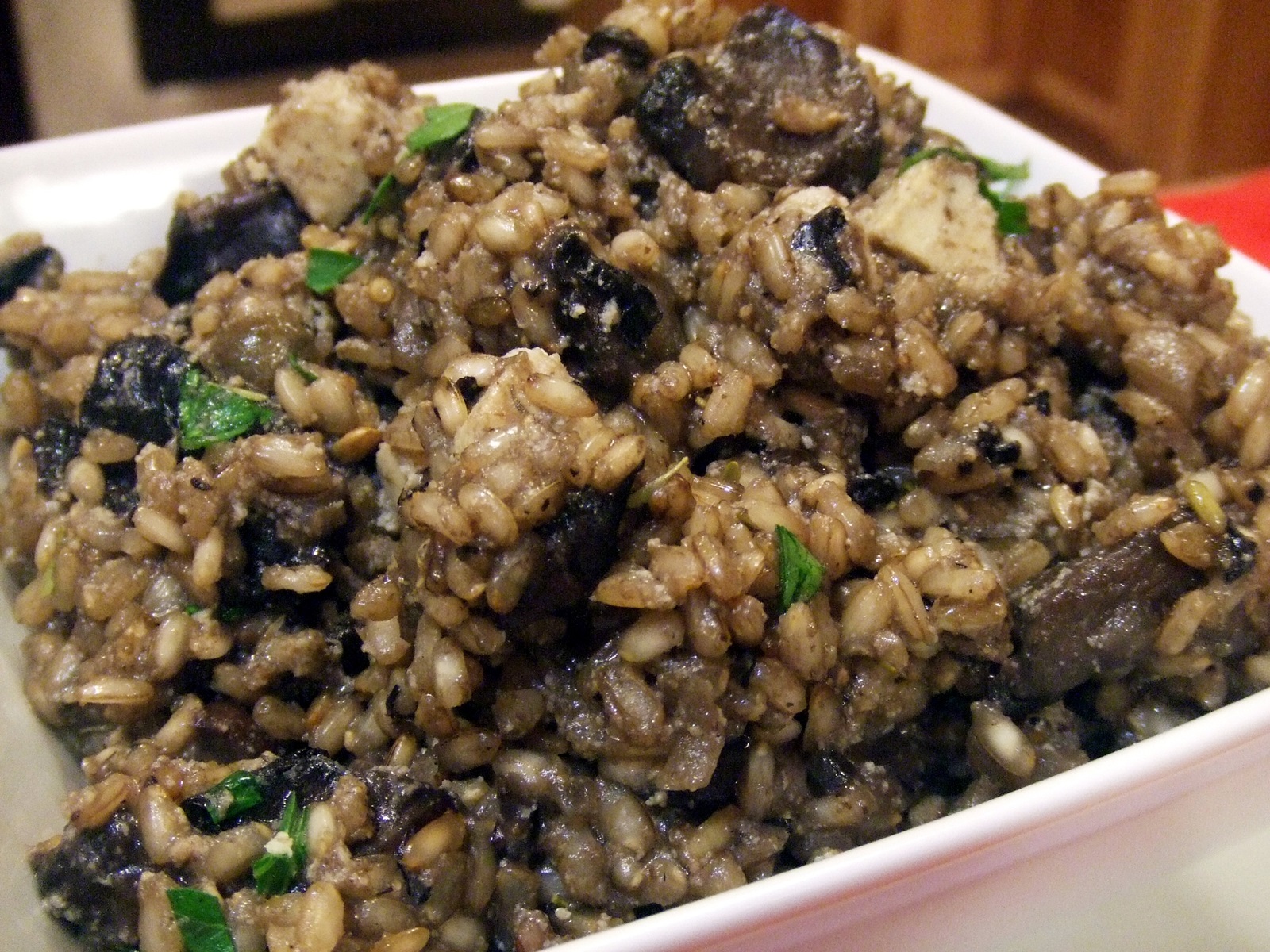 Risotto is usually made with Arborio rice, but I wanted to make one with brown rice. It takes longer, a lot longer, but it is possible. My risotto also has Portobello mushrooms and vegan blue cheese crumbles. It’s rich, creamy and full of flavor. To make my Brown Rice Portobello Risotto: heat 8 -10 cups of low-sodium vegetable broth in a sauce pan. Bring it to a simmer over medium heat. In a large skillet, heat 1 Tbs. vegan butter and 1 Tbs. extra-virgin olive oil over medium heat. Add 4 diced Portobello mushroom caps and cook, stirring, until the mushrooms are browned. Add 1 small diced onion and cook until soft and browned, about 4 minutes. Add 2 minced garlic cloves and 3 chopped scallions. Continue cooking for 1 minute. Transfer the mushrooms to a bowl, cover and set aside. Add 2 cups short-grain brown rice to the skillet and let the rice toast for about 2 minutes. Add 1 cup vegan white wine and let it reduce until it is almost evaporated. Add the simmering vegetable broth, about ½ cup at a time, stirring and cooking, until the liquid is almost completely absorbed by the rice. Continue until the rice is tender. This may take as long as 40 – 50 minutes for brown rice. Make sure you’re listening to some good music so you can sing along or reading a good book to make the time pass faster. Otherwise, you could go STIR-crazy! When the rice is just al dente, add back the mushrooms. Cook for another 10 minutes, adding more broth or water as needed. The risotto should feel creamy but not mushy. Crumble in 4 oz. vegan blue cheese. Add salt and pepper to taste. Garnish with fresh chopped parsley. Serve while hot. 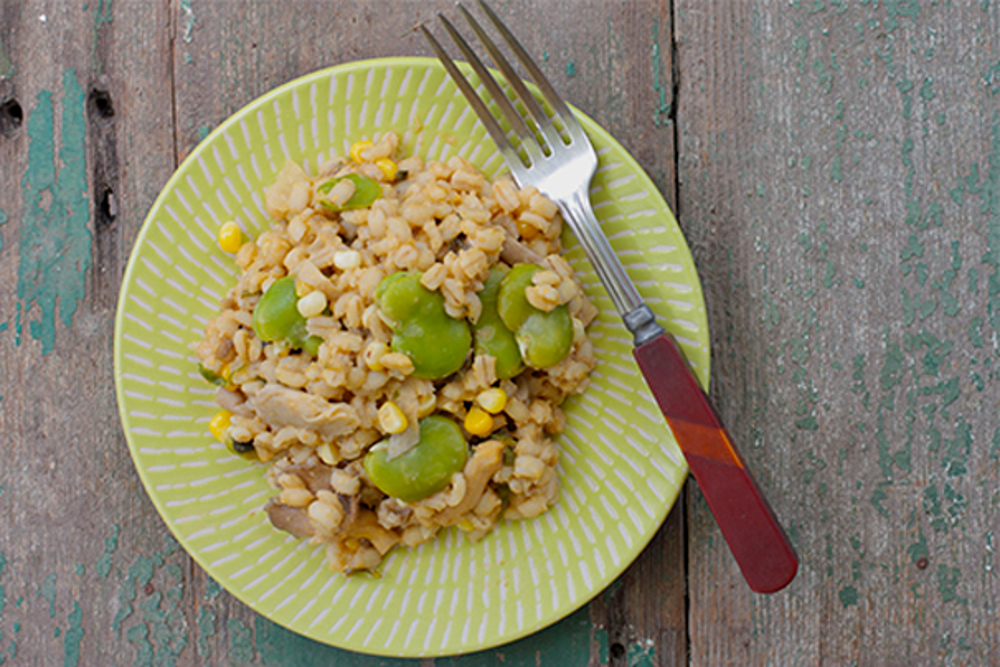 What happens if you want to make risotto but you don’t want to stand there and stir for half an hour? It is possible to make a creamy risotto without making your arm fall off. Use the oven and bake it. Here’s how to make Baked Risotto with Vegan Parmesan and Greens: in a Dutch oven pot with a lid, combine 1 ½ cups Arborio rice and 4 cups of vegetable broth. Bake at 350 degrees for 45 minutes. Most the liquid should be absorbed and the rice should be tender but firm. Remove the pot from the oven and add 1 more cup of broth, ½ cup white wine, 2 Tbs. vegan butter and ¼ vegan grated parmesan or nutritional yeast. Stir for 3-4 minutes until the rice is creamy and thick. Season with salt and pepper to taste. Stir in a large bunch of chopped greens of your choice and stir until heated through. Serve while hot. 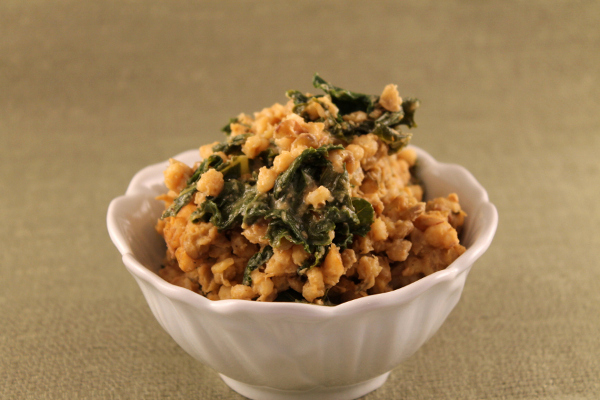 Wouldn’t it be nice to come home to a hot bowl of creamy risotto that’s already done? Well, if you have a slow cooker, you can make it happen. All you have to do is prep the ingredients, add them to the slow cooker and reap the benefits later in the day. Make this Vegan Sausage and Collard Green Risotto: bring 5 cups vegetable broth to a simmer in a saucepan. Heat 1 Tbs. oil in a skillet and cook 4 links of vegan sausage until browned and crisp. Remove from the skillet and slice the sausages into coins or bite-sized pieces. In the same skillet, melt 2 Tbs. vegan butter and cook one chopped onion over medium heat until translucent, about 4 minutes. Add ½ cup white wine and cook, scraping up any browned bits, until the wine is reduced by half, about 2 minutes. Stir in 2 cups Arborio rice and cook until all the wine is absorbed. Transfer the rice and sausage to a slow cooker. Add in the hot broth and 1 tsp. salt and cover. Cook on high for 2 hours, stirring once halfway through. When the liquid has been absorbed and the rice is al dente, turn off the slow cooker and mix in a large bunch of chopped collard greens. Stir in 2 more Tbs. vegan butter, ¼ cup vegan grated parmesan, and season with a pinch of nutmeg and salt and pepper to taste. Serve immediately. 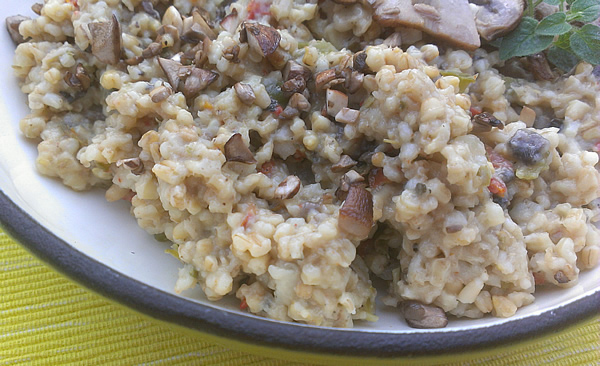 The biggest rule we can break is to make risotto without rice at all. Use other grains like barley, oats or millet or skip the grain entirely and keep it all veggies. When cauliflower is processed, it gets the look and texture of rice. To make Cauliflower Risotto: roughly chop a head of cauliflower and pulse it in a food processor until it looks like rice. Heat a deep saute pan over medium heat. Add 1 Tbs. olive oil and saute 1 minced shallot until softened. Add the cauliflower and stir to coat it in the oil. Add vegetable broth, a little at a time, letting the cauliflower cook. It should only need about ½ -3/4 cup of broth. When the cauliflower is tender, add 2 Tbs. vegan cream or coconut milk and cook another 2 minutes. Season with salt and pepper to taste. Mix in ¼ cup vegan grated parmesan and 2 Tbs. fresh chopped parsley. Serve while hot. For other risotto recipes that skip the rice, try Mushroom Steel Cut Oatmeal Risotto, Lentil Kale Risotto, and Barley Risotto with Fava Beans, Corn and Mushrooms.

Risotto is a comforting dish that everyone should know how to cook. Once you learn the basics, get creative. Break the rules and find new ways to make it that work for you.