If you’re not ready to hear about something totally ridiculous, you may just need to turn away. In the biggest “um, seriously” news we’ve come across in quite some time, we’ve learned that “coal rolling,” which, as defined by the Huffington Post, is the act of truck drivers “intentionally producing copious amounts of diesel exhaust, spewing black smoke into the air as a form of political protest” is really and truly a thing. In fact, there’s video to prove it. And we’ve learned that some drivers are wiling to spend “thousands of dollars altering their rides to produce ever greater amounts of smoke.”

Here’s how it’s done: “modifications include a variety of components that increase the amount of fuel entering the truck’s engine. When there’s so much fuel that it fails to combust properly, ‘it leaves the engine as soot,’ according to an article onDieselHub.com, a website dedicated to diesel truck owners. That soot, which coal rollers call ‘Prius repellent’ in online videos and forums and on decals on their trucks, can then be channeled up through ‘smoke stacks,’ where it exits onto bystanders (or a Prius following too closely) in a thick, pollutant-heavy black cloud.”

Here’s an example of what coal rollers think is so funny to do and make fun of: 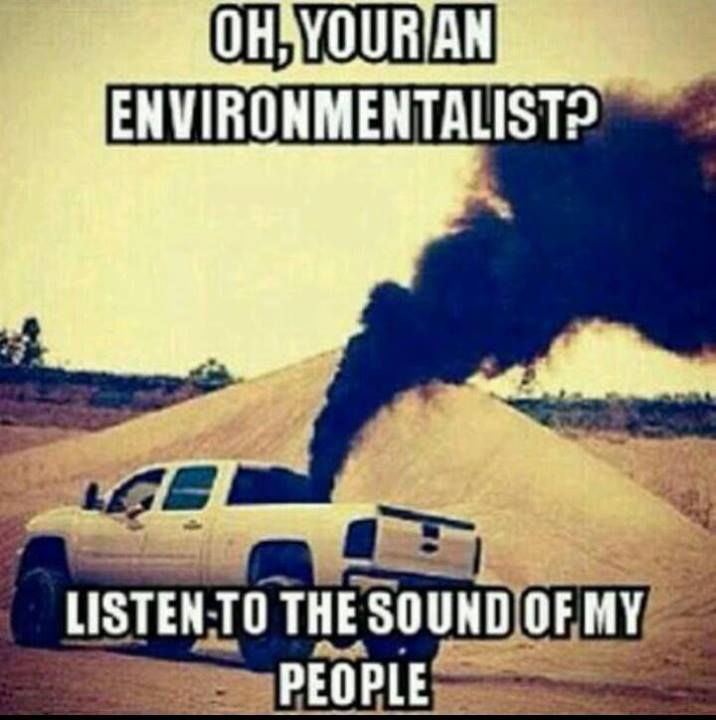 Not only is this incredibly disgusting and ridiculous (“let’s have a few laughs and pollute the earth just for the hell of it” — seriously?), it’s also highly illegal. The EPA clearly states that, “It is a violation of the [Clean Air Act] to manufacture, sell, or install a part for a motor vehicle that bypasses, defeats, or renders inoperative any emission control device.” And coal rolling is blatantly in violation of this. Diesel exhaust is incredibly harmful to people and the environment, and this new thing is the furthest from funny you could possibly get. It’s about as funny as animal cruelty. Sorry, coal rollers: when your “joke” hurts others and the planet we all share, we’ve reached the threshold of a laughing matter and now crossed into “you are insane” territory. If your goal is to anger people who actually care about the planet, then you win — but, at the end of the day, when the anger passes, you’re the one who is just sad.