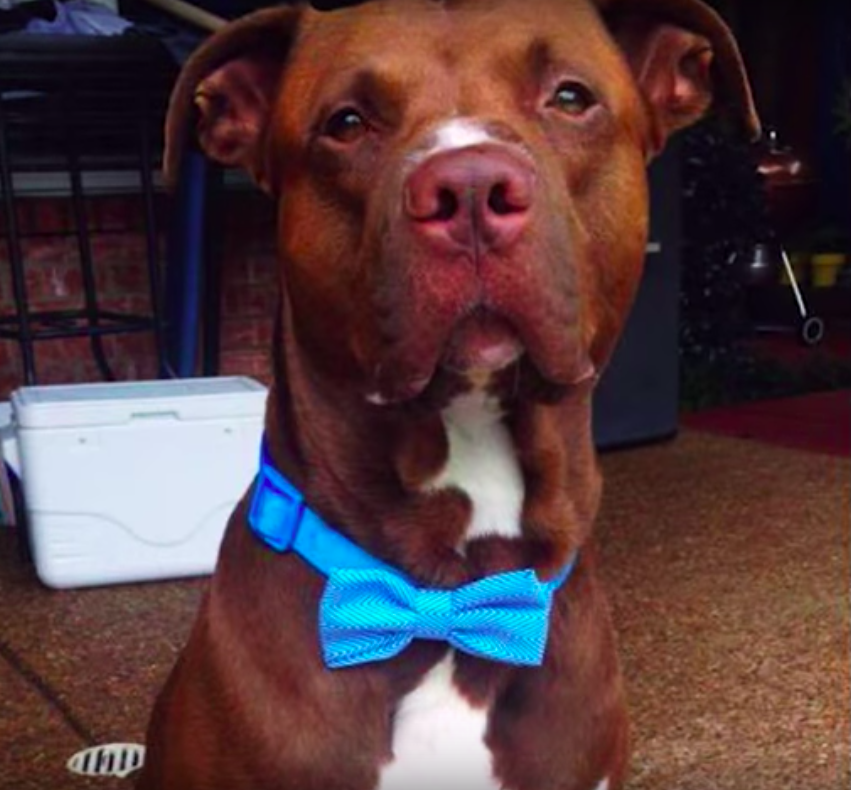 Years ago, Pit Bulls were considered “Nanny dogs” because of their loyalty and gentleness toward their guardians. They were also once an American favorite, earning the title “America’s dog.” Unfortunately, people soon found ways to exploit Pit Bulls’ behaviors and tendencies for dog fights, and their strong appearance became a symbol of violence, drug culture, and gangs. Pit Bulls often get a bad rep but this story highlights one of the many reasons why more people should give Pit Bulls a chance.

Stacie Rae English recently posted on Facebook about her brother, Shelby. Shelby was out walking his dog, Hurley, in their neighborhood around 10 p.m. Because it was late at night, Shelby let the dog off leash so he could explore. All of a sudden, Shelby and Hurley heard a young boy scream and Hurley took off in the direction of the sound.

With Shelby close behind, he saw Hurley grab a copper head snake away from the little boy who had stumbled upon a nest and flung the snake around, killing him.

The boy rushed off and Shelby called animal control and the Highland Village Cops to check the scene. Hurley suffered puncture wounds from the snake and was bleeding, had a swollen neck and was foaming from his mouth, Stacie notes.

“Shelby rushed Hurley to Denton Animal Emergency Hospital where he stayed the night so they could check his blood clotting ability multiple times throughout the night,” Stacie said in her Facebook post about the ordeal.

Shelby and Hurley are both back home and Hurley seems to be doing a lot better! Well done, Hurley.

Seeing the incredible bravery and courage of this dog, who stepped in to help a stranger is enough to bring tears to our eyes.

Out of the six to eight million cats and dogs who end up in U.S. shelters every year, one in four are Pit Bulls or pit-associated breeds and mixes. Sadly, these dogs are currently, the most wrongly marginalized in the U.S. and many other parts of the world. Pit Bulls carry the burden of years of false stigma and myths that they are naturally vicious animals when actually, this stereotype comes from the fact that they are frequently abused and misused in illegal dogfighting rings.

If more people would just give Pit Bulls a chance, they can be very loving companions, and in some communities, they have even become heroes, saving people and their guardians from harm, or in this sweet story, a little boy. Some even protect citizens by using their talents by working on a police force or even as mayors!

Do you live with a sweet Pit Bull of your own or perhaps simply love this misrepresented dog and want to help? Share Hurley’s story and help educate your friends and family about these amazing dogs!