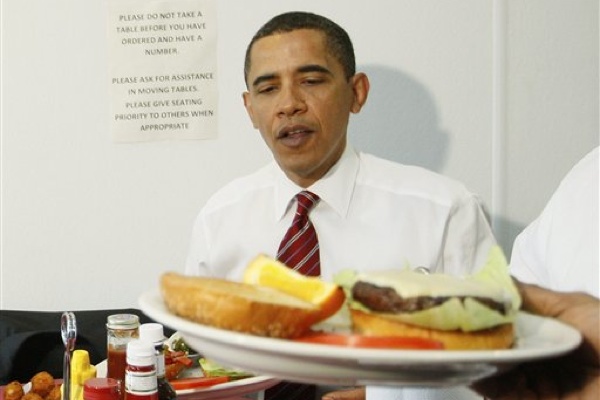 The Obamas have developed a reputation for promoting healthy initiatives like community gardening and the Let’s Move! program, and even for their own healthy habits. Their daily workouts have even led some to call Barack and Michelle Obama “the fittest first couple” in American history.

But a string of recent photo ops featuring the President eating cheeseburgers, hot dogs and other fatty fare may be putting that reputation in jeopardy.

The Physicians Committee for Responsible Medicine (PCRM) plans to file a petition later this week asking the White House to issue an executive order “banning staged official photo ops that depict the president, the first family, the vice president, and members of the president’s cabinet with unhealthful foods including processed meats that can cause cancer and obesity.”

PCRM believes the President has a real influence on the buying and eating habits of American consumers, and that this influence should be use to send positive, healthy messages.

Dr. Susan Levin, PCRM’s director of nutrition was quoted: “The White House would never set up a photo op of a president with a cigarette, so why show him eating foods that cause cancer? Hot dogs, hamburgers, and other unhealthful foods kill more Americans each year than tobacco, and they cost taxpayers billions of dollars in health care. The president can eat what he likes in private, but at orchestrated public events, our leaders are role models.”

Do you agree with Dr. Levin’s statement? Tell us what you think in the comments section below!