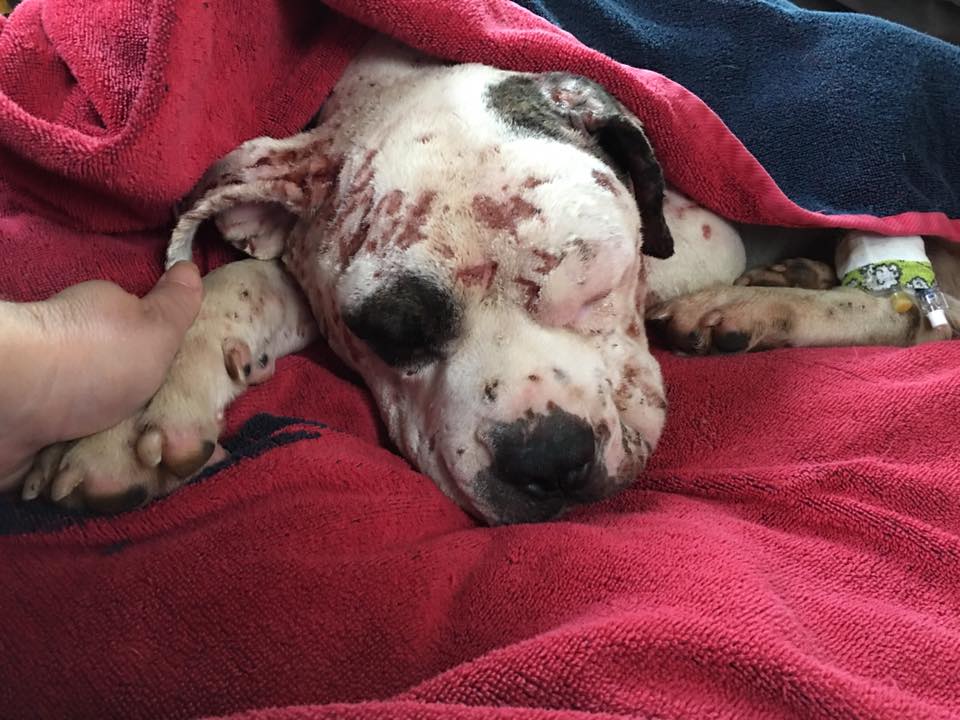 Streetdog Foundation, an organization dedicated to rescuing, rehabilitating, and rehoming abandoned dogs in Memphis, Tennessee, was alerted to a dog found living behind a warehouse in South Memphis, Tennessee. Despite the countless rescues Streetdog Foundation sees, they probably weren’t prepared for the unimaginable condition Liam was found in. Liam’s left eye was swollen shut, his tail was possibly broken, he had bite marks all over his body, and a gash on his face.

Based on Liam’s injuries, rescuers suspect that he might have been used as a “bait dog” for a dogfighting ring. Bait dogs are typically docile dogs, used as “bait” to train the aggressive ones. It is common practice for bait dogs to be cut so the smell of blood triggers the fighting instinct in the already starved and abused fighting dogs. These dogs often suffer unimaginable abuse.

Rescuers rushed Liam to an emergency veterinarian where he was treated for puncture wounds, infection, and dehydration. In all 28 years that the veterinarian has been practicing, she has never seen a dog with this many bite marks and miraculously, still be alive.

Streetdog Foundation has diligently been updating their supporters on Liam’s recovery. The group is celebrating “small” victories, such as the first time Liam got up to walk around the yard at the clinic. 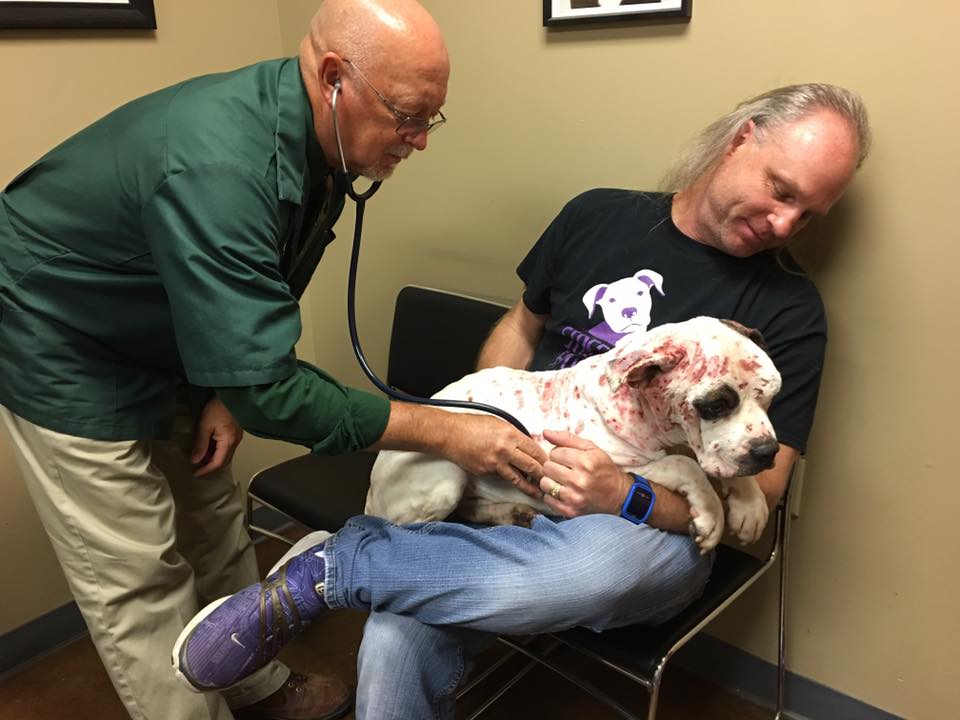 Liam has probably spent his entire life outdoors but for the first time, he is experiencing love. He even has roommates at the clinic – a fox, a giraffe, and an orange puppy. So cute! 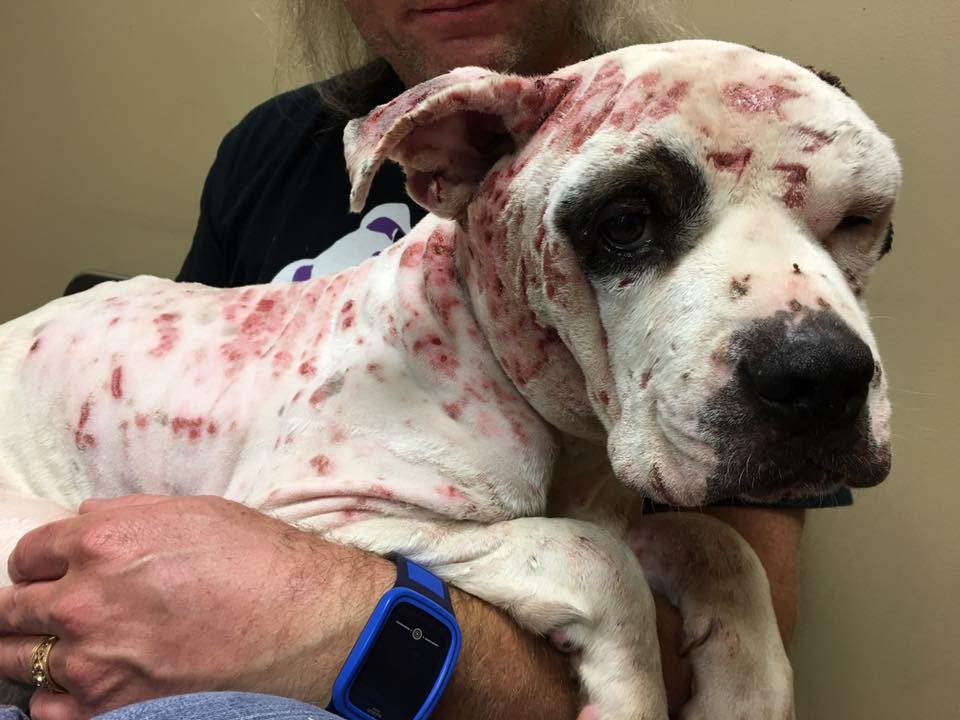 And for the first time … Liam SMILED! Streetdog Foundation reports that his IV was removed and is now taking oral antibiotics and pain medication. 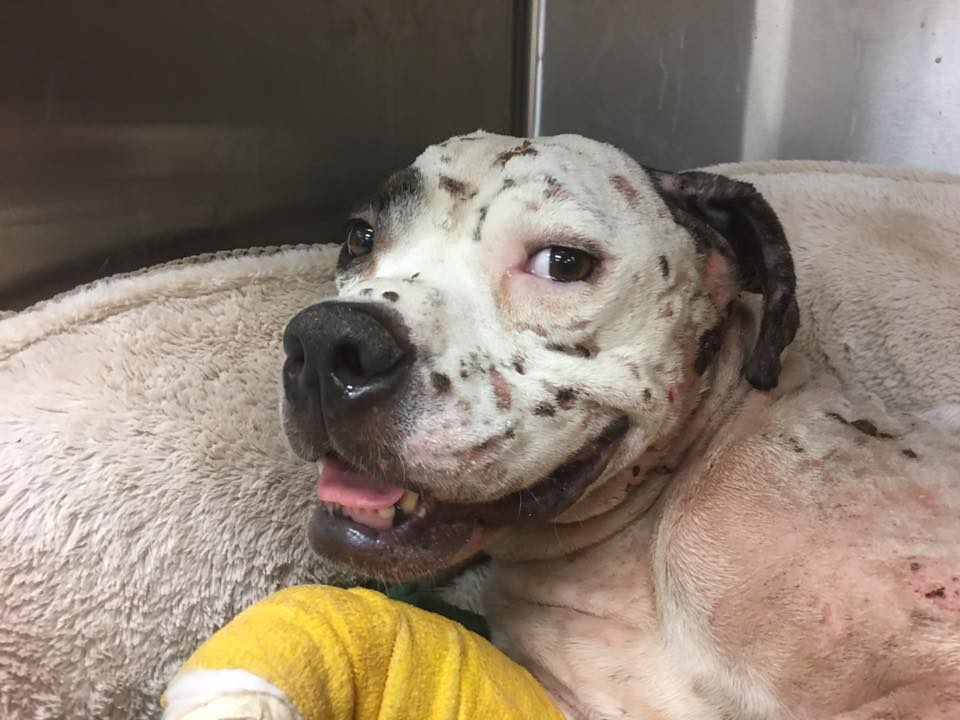 Heartbreakingly, Liam is still afraid to go outdoors due to the trauma he previously faced. But we know thanks to rescuers and countless supporters, this sweet boy will eventually understand he doesn’t have to be scared anymore. Keep up the good work, Liam!

Dogfighting is a common and cruel industry that often goes overlooked and unnoticed because it is an underground practice. While dogfighting is illegal in all 50 states, that hardly prevents people from continuing to abuse animals. If you suspect a dog is being abused for dogfighting, please contact authorities and leave an anonymous tip.

For more information on Streetdog Foundation and the life-saving work they do on behalf of our furry friends, visit their website. To donate towards Liam’s care, click here.

We’re keeping you in our thoughts, Liam!