Dolphins Use Whistles to Say Hello! 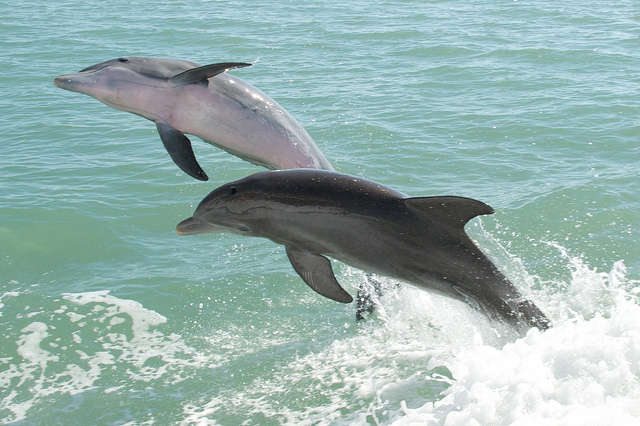 Scientists have found yet another example of dolphin intelligence in the form of friendly greetings and conversations exchanged between these sea mammals.

The new study, published in the Proceedings of the Royal Society B, is the first to show how free-ranging dolphins in the wild use whistles. These findings highlight the complexity of a communication system that may rival our own.

The communication between dolphins doesn’t mimic human conversation and according to some, it may be even more complex than our languages. According to the report co-author Vincent Janik of the University of St. Andrews Sea Mammal Research Unit, “In my mind, the term ‘language’ describes the human communication system; it is specific to us, It is more fruitful to ask whether there are communication systems with similar complexity. I think the dolphin system is probably as complex as it gets among animals.”

The dolphins were found to communicate with various whistles, and while other animals also communicate through similar sounds, what makes dolphins unique is their ability to formulate new and improvised sounds and to adapt to each other’s echolocation patterns.

Some dolphins were observed exhibiting signature greeting whistles that identified themselves as possible spokesmen for the group. According to Janik, “We don’t know whether echolocation works in this way, but it seems like a viable hypothesis, In that case, the whistle exchange is more of a greeting ceremony that communicates a friendly intention and is perhaps not needed to identify the group after the first introduction.”

As we learn more about the creatures we share the Earth with, it is not surprising that they seem to be complex and wondrous. It undoubtedly brings to question any action that harms these intelligent and emotional beings.