Billions of Pounds of Unwanted Meat and Dairy Are Stockpiled in the U.S. – Why Are We Still Subsidizing Factory Farms? 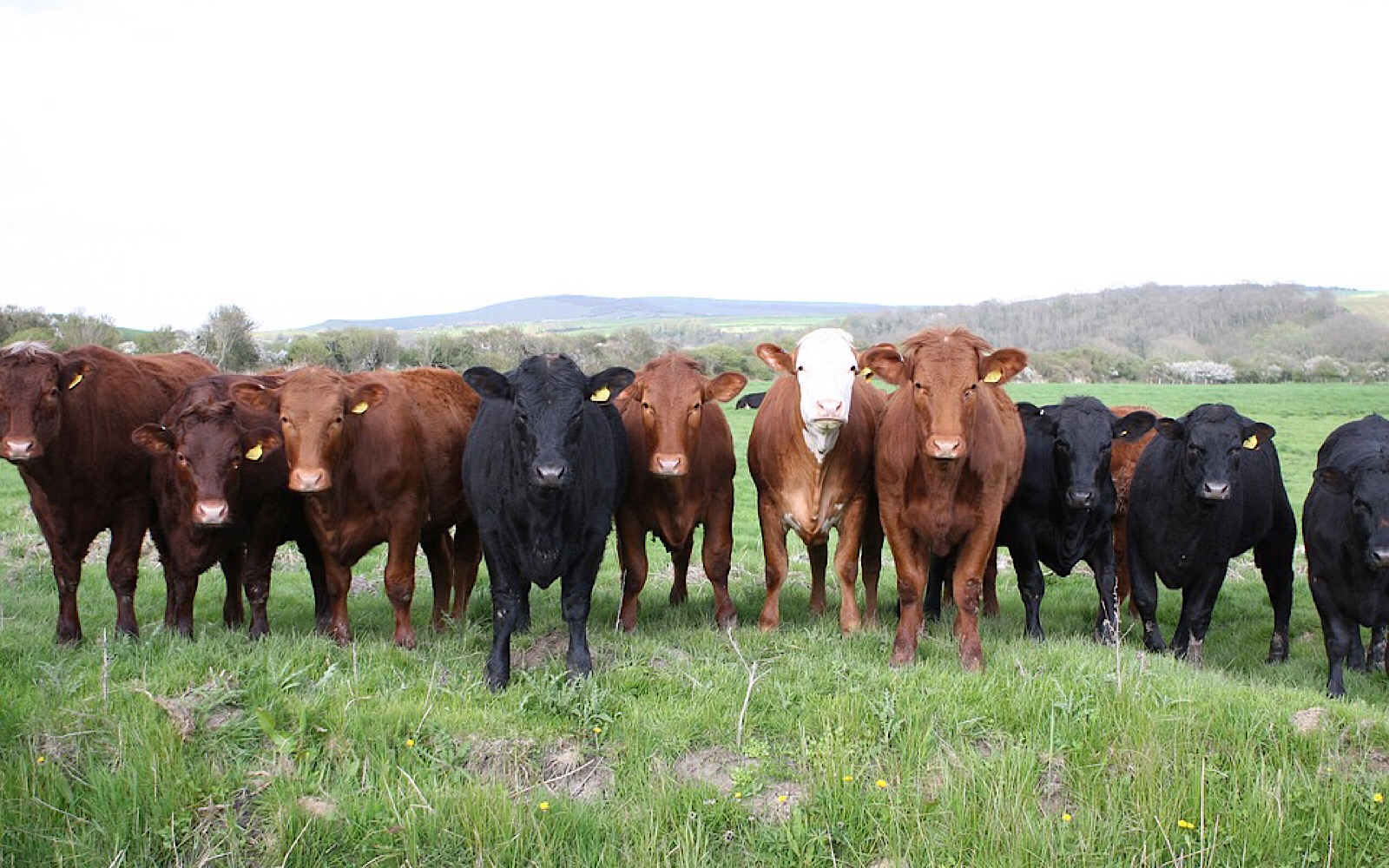 Most of us are aware of how far industrialized animal agriculture, aka factory farms, have spread in the U.S., encroaching on public lands and leading to the near extinction of wild horses and burros and the hunting of beloved wildlife like wolves. Not to mention, these factories are an environmental menace, responsible for high emissions of harmful greenhouse gases (methane), air pollution, and cesspools of waste that leach into precious groundwater and make people dangerously ill. With all the government subsidies and corruption involved in the meat and dairy industries, it can be difficult to comprehend just how big of a problem it all is, and now there are even more shocking facts regarding meat and dairy that will have you picking your jaw up off the floor…

According to the USDA, there are currently 1.39 BILLION pounds of surplus cheese in the U.S., which is the largest domestic reserve of cheese varieties on record. And when it comes to meat (beef, pork, poultry), there are 2.5 BILLION pounds of surplus, which is also a record, and that’s just here in the U.S. alone! Although some of this excess is credited to Mexican and Chinese tariffs on American pork, we suspect the rise in the plant-based movement may have something to do with the high decrease in demand.

With numbers this high, it is not easy to imagine what all this stockpiled meat and cheese looks like, so the people at Vox wanted to help us all visualize it.

The amount of surplus cheese in the U.S. today could fill up the entire Capitol building! 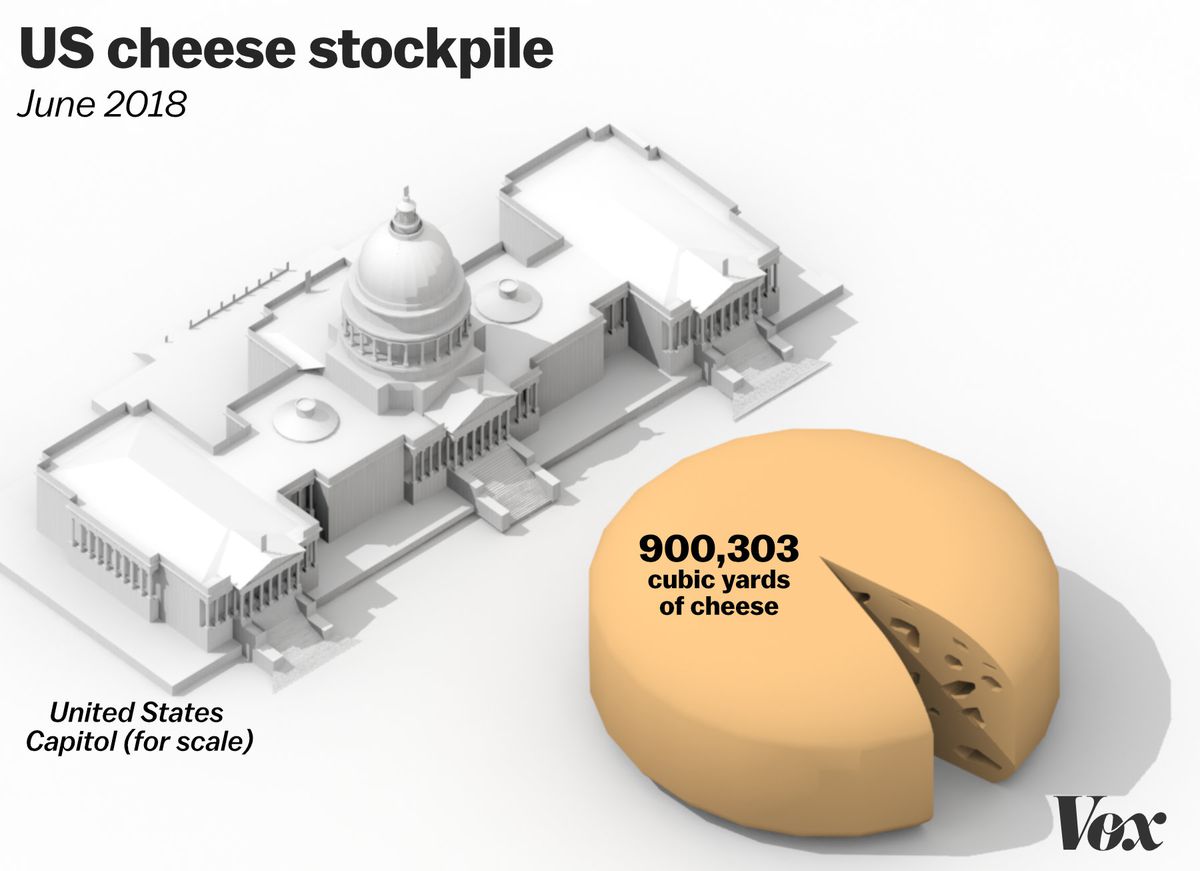 And when it comes to the excess meat stockpiled in the country, this image speaks for itself: 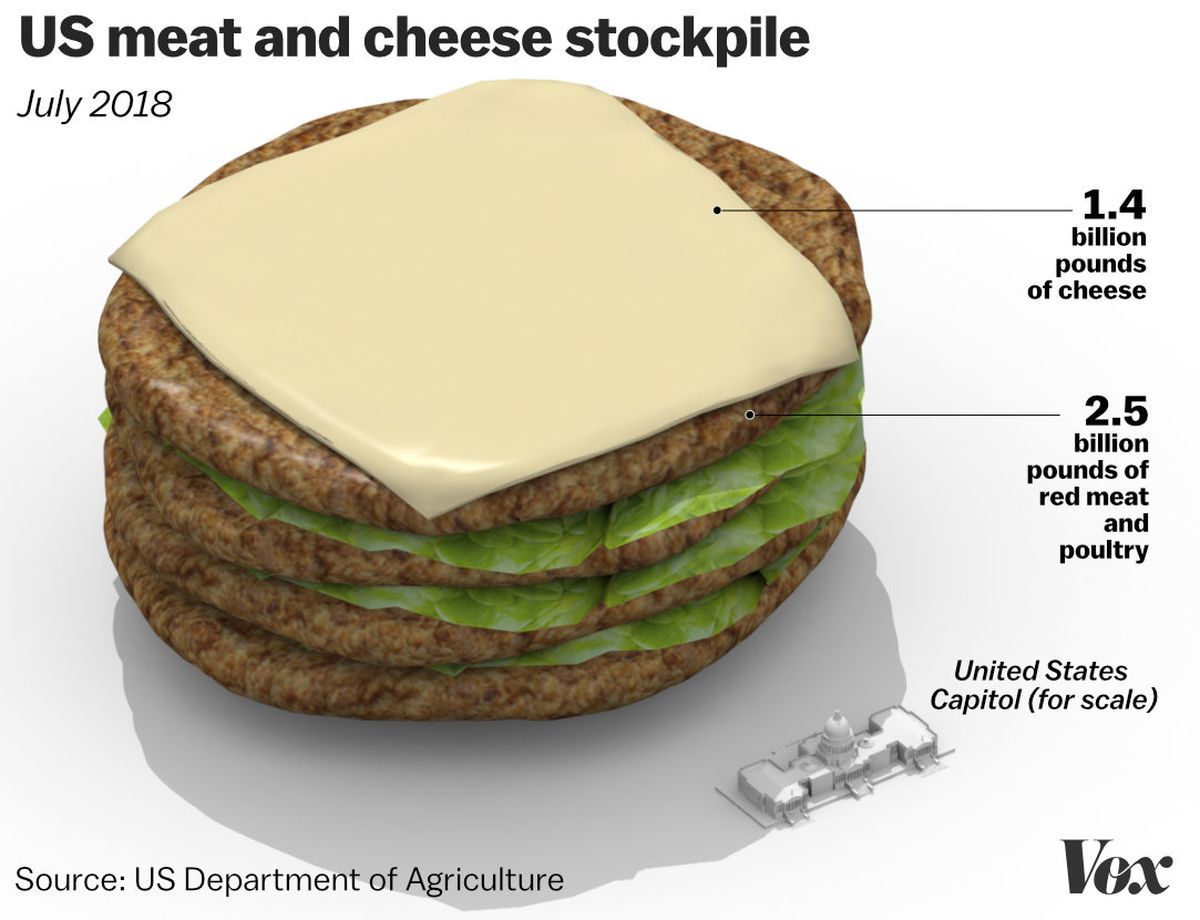 This staggering surplus of meat and cheese is a prime example of just how broken our current food system is. Even though the average American diet is heavier in meat and dairy than most other nations’ diets, government-subsidized Big Meat and Dairy is still producing FAR too much. This is not only awful for the hordes of animals being senselessly killed, and the environment being grossly polluted by raising the livestock, but it also points to issues regarding world hunger and inefficient use of resources, including the use of crops to feed livestock that could be fed directly to people instead of being fed to animals who people are not consuming. Additionally, this surplus is a bad thing for the economy (meat prices are predicted to drop as a result of this excess) and the small American farmer who cannot compete with the monopoly of factory farms.

By simply leaving meat and dairy off your plate, you can help become a part of the solution to decrease demand for animal products, which will hopefully lead to the industries turning on a light bulb and seeing the reality that people simply do not want meat and dairy anymore like they used to. There is no lack of plant-based meat and dairy alternatives available today, and the abundance of options and consumers’ increased awareness of the reality of animal agriculture has led to the 140 percent rise in demand for plant-based foods across the globe. With this alarming degree of stockpiled meat and dairy that no one wants, it is high time the animal agriculture industry wakes up and makes immediate changes to stop this unacceptable degree of waste of resources, and innocent lives.

Want to learn how your food choices have a direct impact on our environment and the world as a whole? Then be sure to check out the fact-heavy, image-rich Eat for the Planet book!