The Ilioupolis Animal Welfare Union (IAWU) has its hands full rescuing the stray dogs and cats of Ilioupoli, Greece. This organization regularly saves dogs and cats that are sick, injured, or abused from this area. Billy the dog was one of the most miraculous recoveries.

Billy, the dog, had been wandering the streets of a rural area of Greece for months. IAWU volunteers were notified that a sickly, starving dog was in need of their help and quickly came to Billy’s aid. According to the volunteers, Billy’s situation was the worst case of criminal negligence that they had seen in years. Even the vet was shocked at Billy’s horrible condition.

Billy was suffering from severe mange, ehrlichia and leishmaniasis. He was starving and all that was left of his body was skin and bones. His blood count was incredibly low as well. It was clear that if they had waited any longer to find Billy, he would not have made it.

According to the volunteers at The Ilioupolis Animal Welfare Union, his liver and kidneys were, thankfully, in good condition. His eyes were still shining and he had a good appetite, all signs that indicated Billy had the fighting spirit he would need to recover from his terrible condition. 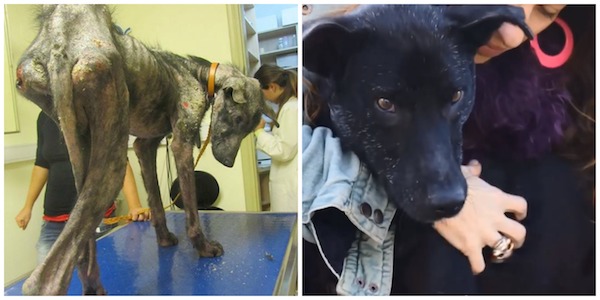 And recover he did! Billy’s transformation over just two months of care is unbelievable. His fur returned, shiny and healthy, and he was able to gain enough weight to romp and play like a normal dog. His happy face and excitement for life had been there all along, Billy just needed a little help to show it.

If you want to help support The Ilioupolis Animal Welfare Union, you can visit their website here. To keep up with Billy and all the dogs this amazing organization is helping every day, follow them on Facebook.